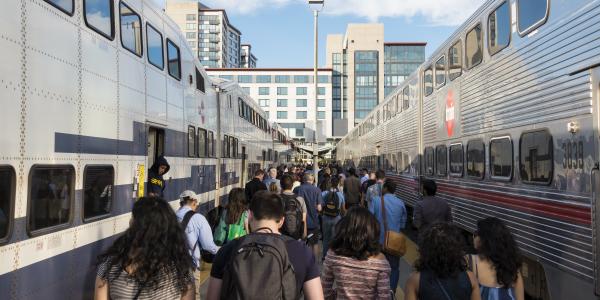 Transit customers in the Bay Area have long had to contend with the consequences of a fragmented regional system. Navigating a confusing array of maps and schedules, paying different fares for seemingly similar trips, and enduring missed connections and long wait times for transfers are all discouragingly common occurrences for people trying to get around the region on transit. It doesn’t have to be this way — and change is coming.

On January 25, the Metropolitan Transportation Commission (MTC) will hear a proposal for a new approach to manage Bay Area transit. If the commission approves the proposal, a regional network manager (RNM) will be charged with ensuring that the Bay Area’s more than two dozen transit operators function more like a single system. Coordinating regional transit will finally be one organization’s job.

SPUR has consistently advocated for a more customer-friendly and integrated regional transit system, notably in our 2015 report Seamless Transit, and more recently has called for a transit coordinator for the Bay Area as part of our Regional Strategy. We are thrilled that MTC is poised to take this critical step toward a more effective regional transit system — and we’ve got ideas to ensure that the Bay Area’s new RNM gets off to a good start.

What Is Network Management and Why Is It Important in the Bay Area?

The Bay Area’s 27 transit agencies are the result of decades of decisions by communities, the region, and the state. Today, these operators have distinct authorities and governance models, rely on different locally sourced and controlled funding streams, and have evolved many aspects of their businesses, such as labor agreements, to be highly individuated. So how can we get them to function as a seamless regional system? Establish an RNM that will coordinate the customer-facing operations of the region’s transit agencies while allowing those agencies to maintain their autonomy.

Sometimes called “network planners,” “transit coordinators,” or “transport alliances,” network managers are found throughout the world in regions with high-performing transit systems. Although the extent of their role varies, all of these organizations help establish the strategic direction of the transit network within a region, and all emphasize the customer-facing elements of transit use, such as fare policy and ticketing, schedules, and customer information.

Network management can make traveling across the region easier for all riders, but it can be particularly important as a means to improve equity in the Bay Area’s transit system. The decline of daily commuting for many white-collar and high-paying office jobs has meant that the relative proportion of the region’s transit riders who are low income and people of color has grown since the pandemic. Analysis from Caltrain has shown that riders transferring from one transit system to another are more likely to be low income and that these riders are disproportionately impacted by difficult connections and uncoordinated fares — issues that network management can resolve.

A more coordinated transit system is not just important for the Bay Area’s transit riders — it matters to everyone in the region. Transit has long been essential to supporting the region’s economic growth, enabling vibrant business districts, and keeping economically vital corridors flowing. Focusing new growth and development around transit is a central theme of Plan Bay Area, the region’s 30-year strategic plan, which designates more than 80% of new households (more than 1 million total) for “transit-rich areas.” The plan further emphasizes the need to make a significant shift away from driving and toward transit if the region is to achieve its greenhouse gas emissions targets and avoid increased congestion. It calls for the percentage of commuters using transit to increase to 19%, an addition of some 500,000 new daily commutes within the region’s transit network. This type of mass shift in behavior won’t happen organically. It can be achieved only if the region succeeds in making transit more convenient and attractive to a broad base of customers.

How Would MTC’s Proposed Regional Network Manager Be Structured?

The current proposal for an RNM is the result of a year-long network management business evaluation led by MTC and advised by a 14-member advisory group of transit operators and stakeholders, including SPUR CEO Alicia John-Baptiste, the group’s vice-chair.

The proposed RNM would have a dedicated staff (housed within MTC) that would report to an RNM council composed of transit agency general managers and MTC’s executive director. The council would be guided by a to-be-formed RNM committee of MTC that would provide regional policy direction and would include eight MTC commissioners and three ex-officio members. The RNM Committee would be advised by the “Voice of the Customer” Advisory Committee, a stakeholder body that would include members of MTC’s existing Policy Advisory Council as well as additional members with specific transit expertise.

How Can the RNM Balance Quick Wins and Long-Term Change?

MTC proposes to establish the RNM described above by the middle of 2023 and to evolve the RNM structure incrementally on the basis of the organization’s performance. This approach will allow some near-term wins. But some initiatives will require larger shifts in how transit is organized and funded in the region.

As proposed, the RNM would function on a cooperative basis, drawing on the existing authorities of both MTC and the region’s transit operators. This strategy allows the RNM to be established quickly, without new legislation or a major new source of funding. Instead, the RNM would initially rely on the voluntary participation of individual transit agencies, whose boards will need to approve many of the RNM’s decisions.

As a consensus-based body, the preliminary RNM is well positioned to make near-term progress on initiatives like regionally standardized wayfinding or fare coordination — for example, establishing common pass programs or free or discounted transfers between operators. Such programs do not require individual transit agencies to take on large financial or operational risks that could unduly impact their specific system or rider base.

Conversely, regional transit integration that involves major shifts in financial resources or operational decision making will require establishment of a more legally and financially empowered RNM. For example, having an RNM take on regional fare integration (establishing a common fare system across all or a subset of the region’s transit agencies) would have major benefits for the Bay Area but would impose a high level of real and perceived risk for individual transit operators, which have historically depended on fares as a revenue source.

Until a consensus-based RNM can evolve into an RNM with the legal authority and financial resources to both compel these types of decisions and mitigate their risks, many significant regional integration initiatives will remain out of reach. For that reason, policymakers at MTC and around the region must continue work toward a more durable, long-term structure for regional network management that can be strengthened and streamlined in conjunction with any new funding sources or legislative changes.

Three Ways the RNM Can Succeed in the Next Two Years

SPUR supports MTC’s proposal to establish and evolve an RNM for the Bay Area. To succeed, the new RNM needs a focused and strategic scope of work for the next two years. We believe that an initial program of work for the RNM should focus on the following:

Changing how multiple government institutions operate and interact is complicated and difficult work, and it will take time and effort to transform the Bay Area’s transit system into a truly seamless network. But transit has a central role to play in so many of the challenges our region faces — whether recovering from the impacts of the pandemic, addressing systemic social and economic inequities, or responding to an ever-growing climate emergency. SPUR applauds transit operators and MTC for the progress they have made under difficult circumstances, and we urge them to keep going.