My Rider Is Your Rider: What the Bay Area Can Learn from Germany’s Collaborative Transit Planning 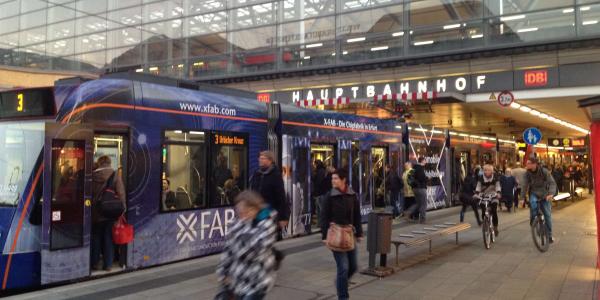 In cities and regions across Germany, dozens of transit operators work together to provide riders with one simple and convenient transit system that is competitive with driving for many trips. In these places, transit ridership has been growing for decades. It’s a far cry from the Bay Area, where transit operators all provide separate services with separate fares, schedules and maps — and where ridership continues to decline despite significant investment.

How was Germany able to align transit operators into seamless regional systems that work for the rider? No, they don’t have a mysterious transportation superpower (or app) that the Bay Area lacks. They simply got everything behind the scenes to work right.

How we organize and structure public transportation is often overlooked, but these factors have a tremendous influence on how transportation is delivered, experienced and perceived. Institutions, leadership and people matter just as much as transit infrastructure. Throughout Germany (and Switzerland and Austria), regional public transport associations known as Verkehrsverbuende or “transport alliances” coordinate and integrate public transit services throughout metropolitan areas and, in some cases, entire states.

Transport alliances do the nitty-gritty work behind the scenes to align different modes of transportation (local and regional buses, light rail, subway and regional rail) and different operators into a coordinated network. They contract with operators and corridor managers who provide passenger service. All riders have to do is check one schedule, use one ticket and follow one set of fare rules to get wherever they need to go, regardless of how often they change trains or buses. The transport alliance creates the appearance of a single transit agency, while the services themselves are actually delivered by many different transit operators. In Germany, the complexity is hidden, whereas in the Bay Area, the complexity is always on display.

It wasn’t always this way. Once, the transit experience in Germany mirrored the transit experience in the Bay Area. The first transport alliance was developed in the mid-1960s in Hamburg. The Hamburg metropolitan area was rapidly expanding and was served by multiple transit providers, each with its own interest and concerns. The result was a disorienting public transit network with redundant routes, conflicting schedules and confusing fares. Public transit use was declining, while car ownership was on the rise. Realizing they had to offer an attractive transit experience across urban, suburban and rural areas to compete with cars, city leaders and transit operators saw that the best way to do that was to offer a coordinated transit experience. They realized they could minimize transit’s competitive disadvantage by integrating public transit service in rural and suburban areas with urban routes to offer a truly coordinated regional network. Today nearly all public transportation operations in Germany are coordinated through a transport alliance.

Earlier this month, with the support of TransitCenter, SPUR hosted two German experts in transport alliances — Thomas Werner from the Münchner Verkehrsgesellschaft and Gisela Grafin von Schlieffen from the Rhein-Main-Verkehrsverbund — for a series of roundtable discussions about the approach.

Like the United States, Germany is a federal country where local control and decision-making are valued — and they were able achieve regional coordination. Whether the model is perfect for the Bay Area or not, there’s a lot to learn from how Germany organizes and delivers public transportation. Here are six key takeaways for the Bay Area from our conversations with Gisela and Thomas.

1. It takes more than just transit infrastructure to grow transit use.

The transit experience is what drives riders to use it. Since 1993, Germany has seen a significant increase in transit ridership across the country, compared to stagnant or declining ridership in the United States. As Gisela plainly put it, “The less the customer has to worry, the more she is going to use transit.” Frequent and reliable transit service isn’t enough if the fares don’t make sense, if the maps are confusing to read and if connections not reliable. The customer doesn’t have to worry when taking transit in Germany because the transport alliance works hard to make the experience attractive, convenient and easy. “He should not notice that transit is provided by different operators,” Thomas added. “He should not suffer for it.”

2. Transit operators rise and fall together.

Bay Area transit systems are inextricably linked to one another; fluctuations in demand reverberate across transit systems. We need transit to succeed across the region, not just in a few places. Yet the way transit is governed and operated in the Bay Area encourages independence, rivalry and competition. The public transit operators in 1960s Hamburg understood that their fate was shared. Growth in car ownership and falling transit ridership were not a cue not to look inward but to collaborate and develop a fully coordinated transit system.

3. Transit is fundamentally a regional issue.

The Rhein Main Verkehrsverbund (RMV) was established in 1995 and is responsible for organizing all public transportation in the Frankfurt Rhine Main region, as well as five neighboring states. The RMV— and nearly every transport alliance in Germany— covers a large geography because it reflects how people travel. As the importance of regions grew, more people needed to cross jurisdictional boundaries. The value of any individual transit link came to depend on its connection to a larger network; a small bus service that offered infrequent service and poor or no connections to a regional rail network was far less useful than one that regularly connected to a bigger network. So long as transit was organized locally, operators couldn’t deliver a system that was most useful to the user. Only by conceiving transit on a regional level could they create an “anywhere to anywhere” network that made transit a truly viable option for people in urban, suburban and rural areas.

In the Bay Area, more than a third of all workers cross a county boundary to reach their job. Many major transportation projects underway — Caltrain electrification, the Transbay Transit Center, BART to Silicon Valley, the new Transbay rail crossing and more — are projects of regional significance that will support and encourage travel across jurisdictional boundaries. And yet most transit in the Bay Area is funded and planned at the local or county level. German transport alliances provide a good model for how to get the most out of a transit system given regional travel patterns.

4. Transit operators don’t have to do it all.

In the transport alliance approach, political, administrative and operational functions are separated. The governance system is designed to encourage feedback between the transit operators, the transport alliance and the governing (See Figure 1: Allocation of functions in VVs). Government jurisdictions establish the overall level of public transit service for a set area, but the transport alliance translates that into specific service levels by mode, route and schedule — with crucial input from the public transit firms actually providing the service. Separating the key functions achieves economies of scale, increases efficiencies, saves money and enables customers to travel easily within a region. A complex set of rules and regulations had to be established to make this structure feasible. As Gisela explained, it required a lot of “compromises in a constructive manner.”

We ask a lot of our public transit operators. They not only provide the service, set the fares and plan the network but lead transit construction, manage transit-oriented development, conduct outreach — the list goes on. Most agencies don’t have the resources or capability to take on other roles, much less maintain current service levels. Externalizing or separating some functions, as German transport alliances do, may be beneficial. At the very least, there’s merit to thinking about what functions — from mapmaking to network planning to construction — could be consolidated or coordinated to offer improved regional mobility.

There may be a role for the state too. While a few transport alliances formed organically, most resulted from a series of laws passed in 1993 requiring coordination at the regional level as a condition for funds. Even then, getting a transport alliance off the ground often required a stakeholder — either the government or a transit operator — to guarantee revenues in case of loss from integration; this may be a role the State of California could take on.

Allocation of Tasks in Transport Alliances

5. Big moves can be catalysts for big governance changes.

The MVV Verkehrsverbund, which operates in Munich and the surrounding region, was founded in 1971 — the year before the S-Bahn opened and Munich hosted the Olympics. City officials and policymakers realized that coordination was a prerequisite for the success of both and, according to Thomas, locked themselves in a room until they agreed on the most contentious issue: a formula for distributing farebox revenue back to the transit operators. It was the combination of the large-scale investment and the political will that made the transport alliance possible, a reminder that integration is difficult and needs strong leadership. The right partners have to be at the table to make things happen.

The Bay Area is on the cusp of major transit investments that will have profound effects on the region’s transportation system. These big moves may offer an opportunity to consider governance changes. We shouldn’t expect big changes overnight, however. Most transport alliances introduced their regional public transit framework in phases; German urban regions typically had fairly extensive public transit networks before the introduction of transport alliances. Can we use the Bay Area’s forthcoming transit investments to phase in key governance changes?

Diving into the Complexity and Setting Goals

When the transport alliance model was first established, there was no template; policymakers and transit operators took a real risk and figured out how to make transit coordination work. They recognized that transit is fundamentally a regional issue and that giving up some local control was in the interest of cities and individual transit providers. So they put aside rivalries and agreed on a shared goal — a reliable, convenient, integrated transit system — and put systems in place to achieve that goal. Cities and states took on larger roles — and often the risk, as well. It wasn’t easy, and it’s still not easy, nor is it a perfect system. But at the end of the day they’ve achieved enviable success.

Transit in the Bay Area and across the state will work best when all the pieces fit together. The status quo approach to how we fund, deliver, manage and evaluate public transit is not producing a regional transit system that works for riders. How can we make things better? As the German example shows, a place to start is establishing goals, standards and targets for the region’s transit system and then systematically removing obstacles that stand in the way of those goals. A key takeaway from the transport alliance approach is that we can’t shy away from complexity but must address it head-on. Only then can we create simplicity for riders and achieve enviable success of our own.