A Regional Transit Coordinator for the Bay Area

Making our many transit systems work as one integrated regional network 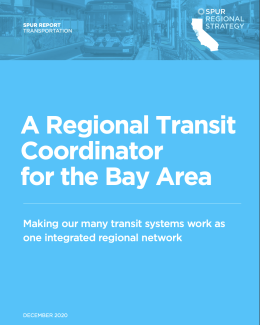 The Bay Area’s transit challenges are many: unreliable service; poor connections between services; divergent maps, schedules and fares; uncoordinated capital investments that lead to both under-building and over-building; and fare policies that put transit out of reach for many. In recent months, as COVID-19 drastically decreased ridership and revenue, the outlook for transit’s future has become dire.

Many of these issues are directly related to how fragmented the transit network has become: The Bay Area has over two dozen different public transit operators. For more than a decade, transit advocates have been pressing for coordination that would allow these many services to function like one seamless network. But despite significant effort and spending, transit passengers are still forced to transfer simply because they’ve hit the edge of a transit district; maps, schedules and fares remain uncoordinated and confusing; and investments continue to be driven by local needs and pet projects rather than regional priorities.

Coordinating the regional transit network is complex, but that’s not the reason it hasn’t been done. The real reason is that it’s not anyone’s responsibility. SPUR recommends establishing a regional transit coordinator, an institution empowered to coordinate transit operations across a cohesive network. With appropriate authorities, such an agency could do more to reverse course and create a seamless transit network than each operator could achieve by acting alone or through ad hoc coordination.