Setting the Region’s First Connected Network Plan Up for Success 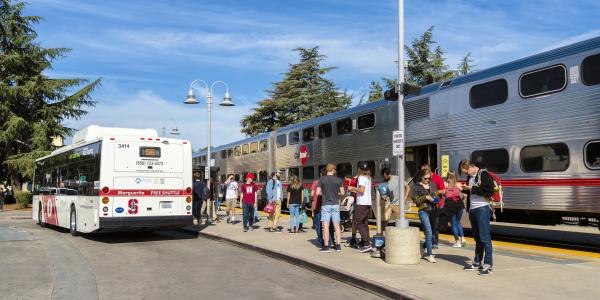 Last year, the Metropolitan Transportation Commission (MTC) convened a Transit Recovery Task Force to stabilize and reimagine public transit in the face of a severe financial crisis brought on by the pandemic. The process culminated in the Transit Transformation Action Plan, which seeks to ensure that Bay Area transit services are equitably planned and integrally managed as a unified, efficient and reliable network. One of the first steps, targeted for completion in late 2023, is to develop a connected network plan, a strategic vision to guide planning and investment.

For the Bay Area, a connected network plan can clarify a long-term vision for the region’s transit system and facilitate the governance and funding reforms that will be needed to create a more rider-focused transit system and increase ridership. In this article, we’ll look at what a network plan is, why it’s important to do one and how it differs from other kinds of transportation plans. We’ll also recommend a scope for the Bay Area’s connected network plan.

What Is a Connected Network Plan?

A connected network plan lays out a strategic, long-range vision for a transit network in order to guide planning and investment decisions. Centered on connecting people and places, this type of plan is agnostic about what technology to use (heavy rail, light rail, bus, etc.) and which operator will provide service. Instead of asking, “Should agency X build and operate rail service between point A and point B?” a connected network plan asks, “What levels of transit service do we need between point A and point B?” In this way, it shifts the focus away from roles, responsibilities and specific modes and toward connecting people and places. In some places, a connected network plan is called a “service-based vision” or a “structuring network.”

Why Does the Bay Area Need This Plan?

There are three reasons why the region should develop a connected network plan. First, the plan will lay the policy foundation for a more integrated and coherent public transit network. It is a prerequisite to other tasks in the Action Plan, such as the hub design toolkit and capital project prioritization efforts, which will help ensure that major transit projects are more cost-effective and transformational. Second, a connected network plan is a vision. That makes it a powerful tool for engaging the public and growing support for public investments in transit. By identifying the transportation corridors and hubs that make up an integrated network, it provides an easily understandable picture of what the public is being asked to invest in. In regions around the world that developed and implemented connected network plans, more people took transit, agencies became more efficient with public money and public confidence in transit rose, creating political support for increased government spending on transit. With many agencies nearing a “fiscal cliff” due to COVID-related decreases in ridership and fare income, a comprehensive vision and investment plan can go a long way in building public support. Third, having an agreed upon connected network plan can help facilitate and anchor the conversations about establishing a network manager for the region’s transit network.

How Is This Different From Plan Bay Area?

While Plan Bay Area is far ahead of most regional transportation plans around the country, it still starts with projects — not service. Plan Bay Area is developed by analyzing and selecting from a list of transportation projects submitted by congestion management agencies, local jurisdictions and transit operators. In the past, these types of project-based plans contributed to overinvestment in capital expansion projects and underinvestment in transit service, maintenance and capacity improvements on the existing system. Even though it is not a connected network plan, Plan Bay Area 2050 takes important and positive steps toward developing a more integrated network. For instance, MTC issued an open call for transformative projects, developed a strategic vision for an express bus network and implemented a uniform project performance assessment to evaluate the cost-effectiveness of nominated projects for Plan Bay Area 2050. In our view, these are good steps in the right direction, and the connected network plan is the next step toward a better regional transit network.

How Does This Relate to Other Plans?

The connected network plan is not a stand-alone document; it has bearing on:

We hope that the connected network plan will offer a visionary and ambitious plan that demonstrably solves people’s mobility needs and that over time translates to changes in the region’s funding and infrastructure investment strategies.