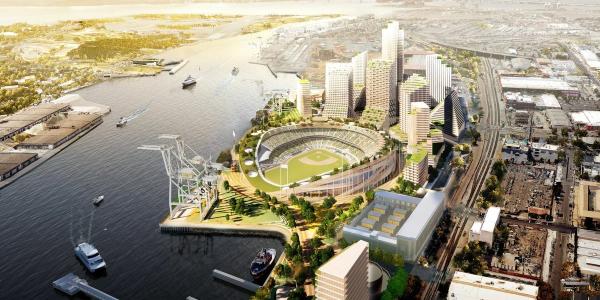 Photo rendering by BIG Architects, courtesy of The City of Oakland

The Howard Terminal Ballpark Project presents an enormous opportunity for the City of Oakland. Located just next to Jack London Square, the $12 billion project would convert a no-longer-used terminal at the Port of Oakland into a new 35,000-seat waterfront ballpark for the A’s surrounded by thousands of units of new housing as well as retail shops, offices, and open space. The project has the potential to knit Howard Terminal into the fabric of Oakland and bring significant foot traffic to Jack London Square.

However, the project also could create challenges for Oakland. In the short term, construction of new homes, offices, and retail spaces could make accessing existing businesses more difficult. In the long term, residents in adjacent West Oakland and Chinatown could be displaced. The ballpark will bring an influx of people to a largely industrial area that is not currently prepared for them, creating congestion, safety risks, and potential disruptions for the Port of Oakland.

Figuring out how to realize the pros and mitigate the cons of the ballpark is a fraught issue for Oakland. Over the past few years, the city has lost the Raiders to Las Vegas and the Warriors to San Francisco, making the A’s the only major professional sports team in Oakland. Now the A’s are thinking about relocating. Frustrated by an outdated stadium and low fan turnout, the team has implored the city to help the team build a new ballpark at Howard Terminal.

The project faces a long road to approval and completion. So far, the Oakland City Council has approved a nonbinding term sheet outlining project specifications and has certified its environmental impact report (EIR). In addition, the San Francisco Bay Conservation and Development Commission (BCDC) has voted to remove Howard Terminal from port designation, opening it up for other types of development. To get this project across home plate, Oakland and the A’s must finish negotiations and reach a final development agreement outlining affordable housing requirements and identifying the parties responsible for covering the cost of offsite infrastructure developments. The project also must be approved by and acquire permits from multiple local, state, and environmental bodies, in addition to garnering final approvals from Oakland’s Planning Commission, Community and Economic Development Committee, and City Council.

SPUR’s Advocacy as the Project Has Progressed

SPUR has been following the Howard Terminal process closely. With the goal of ensuring that the project is a win not only for the A’s but, more importantly, for the City of Oakland and its residents, we have provided input on planning, housing, and transportation-related activities at significant points in the project’s journey:

During the draft EIR’s public comment period, SPUR expressed belief in the ballpark project’s potential to be a physically and economically significant project for Oakland. However, our letter noted the complex issues raised by the Howard Terminal’s location and urged the project team to consider its effects on adjacent neighborhoods and port operations, transportation modes, the environment, and affordable housing goals.

Prior to the vote on the term sheet, SPUR submitted comments to the Oakland City Council. We reiterated support for the project but encouraged the city and the A’s to identify off-site infrastructure financing and to clearly respond to nearby communities’ project asks, which were developed in a year-long process. We again expressed our belief that the project could be a catalyst for long-desired transportation improvements and urged the project team to prioritize rail safety and public transit improvements. We also broached the need for racial and economic justice considerations: Given Howard Terminal’s proximity to West Oakland and Chinatown, the project must ensure that these areas face no residential and economic displacement.

Before this vote, SPUR sent a letter to BCDC supporting removal of the port designation from the Howard Terminal site, given the assessment of BCDC and port staff that Howard Terminal is not essential for the port’s growth. We took the opportunity to reiterate our unaddressed concerns regarding lack of clarity about project financing, prioritization of public transit improvements, development of housing at a range of prices, and inclusion of broad community input.

Our December 2022 letter detailed the issues that need to be addressed in the final development agreement.

SPUR appreciates the work that the City of Oakland and the A’s have done to improve the project and move it forward. The recently published Transportation Guide demonstrates their commitment to planning for significant increases in human traffic to the site. We hope the guide’s goals are properly financed and implemented.

We are monitoring the A’s plan to develop affordable housing on and near the project site. The plan calls for 15% of housing built on the site to be deemed affordable. In existing neighborhoods near the ballpark site, the plan calls for the A’s to develop or preserve housing units equal to 20% of the total onsite units. This plan should be prioritized in the initial stages of the project’s development to ensure that those who work within the project area have adequate and realistic housing opportunities.

At this point, negotiations between the A’s and the City of Oakland are in extra innings, and an agreement must be reached soon. The ballpark project is a once-in-a-generation opportunity for the city that could enliven Oakland’s sports culture and provide opportunities for Oakland’s residents. We are excited about the possibility of an A’s ballpark at Howard Terminal and will continue advocating for the project to deliver SPUR’s vision of equity, sustainability, and prosperity for the City of Oakland.