By Jonathon Kass and Laura Tolkoff 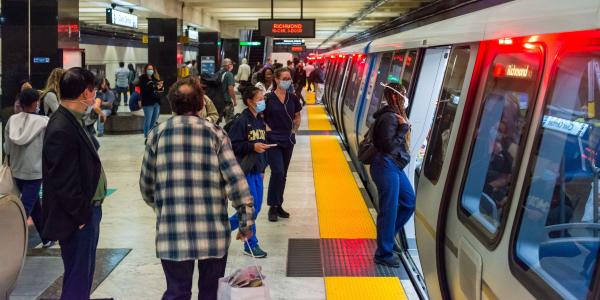 The Bay Area has more than two dozen different public transit operators. The region allocates nearly two-thirds of its transportation funding to public transit, yet less than 5% of all trips in the region are made by transit. Having so many different transit systems makes it harder for riders to understand and use the services available to them.

The Bay Area’s transit challenges are many: unreliable service; poor connections between services; divergent maps, schedules and fares; uncoordinated capital investments that lead to both under-building and over-building; and fare policies that make taking transit out of reach for many. In recent months, as COVID-19 drastically decreased ridership and revenue, the outlook for transit’s future has become dire. Agencies are further saddled with a backlog of maintenance and repair needs and mounting pension obligations. The consequence is that agencies are facing a fiscal cliff that will result in less service in the near term and create the very real possibility of ceasing to operate altogether.

Many of these issues are directly related to how fragmented the transit network has become. For more than a decade, transit advocates have been pressing for a more seamless transit network as the region’s population and economy grow — while transit ridership, as a share of all trips, declines. But despite significant effort and spending, transit passengers are still forced to transfer simply because they’ve hit the edge of a transit district; maps, schedules and fares remain uncoordinated and confusing; and investments continue to be driven by local needs and pet projects rather than regional priorities.

The state and federal government have long recognized that transportation systems work best when they are coordinated at the regional scale. Many people cross county and transit district boundaries on a daily basis for work, school, appointments, errands and social visits. Improving regionally coordinated transit does not diminish local service — in fact it ensures that local services both support and benefit from playing a role in regional trips. Transit coordination in other regions has yielded better transit options for existing customers, increased fare revenues for operators and growth in the percentage of trips taken by transit.

Coordinating the regional transit network is complex, but that’s not the reason it hasn’t been done. The real reason is that it’s not anyone’s responsibility. In a new report, SPUR recommends establishing a regional transit coordinator, an institution empowered to coordinate transit operations across a cohesive public transportation network. With appropriate authorities, such an agency could do more to reverse course and create a seamless transit network than each operator could achieve by acting alone or through ad hoc coordination.

A Transit Coordinator for the Bay Area distills relevant lessons from five case studies from around the world, all places that have developed some form of transit coordinator entity. These precedents lead us to propose the following recommendations.

Action 1. Create a service-based vision for the transit network.

The first step is to develop an actionable vision for a coordinated regional transit network. This should include a hierarchy of transit hubs throughout the region; operational standards for these hubs and for the transit services that connect hubs to each other and to the surrounding community; and standards for increased housing, jobs and services expected at each type of hub. Transit capital investments should be prioritized to support this regional transit network vision.

An integrated express bus network operating on a system of managed freeway lanes can deliver an essential new layer of regional transit connections. Such a system would leverage existing freeway infrastructure to deliver coordinated transit to areas of the region that are poorly connected today. This effort should begin with a regional express bus plan to guide coordinated operations among individual express bus operators and should include coordinated infrastructure including freeway-based bus stations, direct access ramps and last-mile connections.

Coordinating transit trips across multiple operators requires an easy-to-understand integrated fare structure. At the regional level, this will require revenue-sharing among operators as well as an additional regional funding pot that is available to make sure individual operators do not lose revenue in the process of converting to simpler and more equitable fares.

Action 5. Bring down the time and cost of delivering transit projects.

Improving transit project delivery requires a standard framework for transit investment proposals, known as business cases. This framework must also establish a system for evaluating each business case before making financial or political commitments to a given project. Improved project delivery also requires that the region establish a “stage gate” process with phases and periodic decision points to determine a project’s readiness to advance to the next phase and receive more funding.

Recommendation 2. Create a transit coordinator for the region.

The Bay Area is not the only region with many different transit operators, but it does stand apart because it has not created an institution empowered to coordinate transit operations into a cohesive public transportation network. As the regional transportation planning agency, the Metropolitan Transportation Commission (MTC) is a leading candidate for the role and is well positioned to assume responsibility for the coordination of fares, schedules and wayfinding. In Chapter 3 of the report, we explore this possibility as well as other options.

Promoting MTC into the role of transit coordinator for the Bay Area, or creating a new or combined institution to serve this function, also requires rethinking the role of the region’s 27 transit agencies, nine county transportation agencies, nine counties and 101 cities in the decisions that affect public transit. For each of the five actions listed in Recommendation 1, we outline the success factors, authorities and tools required to advance a regional focus and meaningful coordination.

Now is not the time to be constrained by historic institutional roles. Establishing a regional transit coordinator that has the authority to implement coordination strategies can significantly improve transit access, increase transit’s market share and help the region make better planning decisions and public investments. The challenges at hand demand a regional response with clear authority and responsibility to create a well-integrated regional transit network.