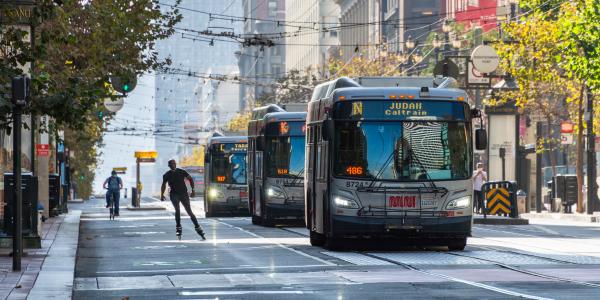 In the early months of the pandemic, the Metropolitan Transportation Commission (MTC) convened a 32-member Blue Ribbon Transit Recovery Task Force to stabilize and reimagine public transit in the face of a severe financial crisis brought on by the pandemic. This task force — composed of transit agency managers, two state legislators, the secretary of CalSTA, eight commissioners, union leaders and several advocates — was responsible for guiding the distribution of federal rescue packages, aligning operators’ near-term recovery strategies and strategies for welcoming riders back, and establishing a roadmap to reimagine Bay Area transit.  It culminated in a Transit Transformation Action Plan with 27 actions to reimagine transit and set the stage for new legislation, commission policies, funding and governance changes in upcoming years.

We congratulate the task force members on what they have accomplished together. Below, we summarize some of the key outcomes of their efforts, offer our reflections and share a look-ahead for the key actions we’ll be tracking from the Action Plan.

One of the first steps the task force took was to adopt equity principles to guide decisions. This was chosen as a starting point in order to recognize  that there are many living legacies of institutional racism in transportation, and the people who are continuing to take transit during the pandemic are often those with the fewest choices, who would be most impacted by service cuts.

MTC and operators advocated together to secure a significant amount of federal aid. The federal government passed two generous rescue packages, bringing about $4 billion to Bay Area transit agencies. The first package (“CARES”) was distributed quickly with the goal of restoring service and implementing a more coordinated response to the pandemic. It prioritized the health and safety of transit riders and workers through increased cleaning, the distribution of personal protective equipment, and greater consistency in public health messaging across operators. The second package (“CRRSAA”) is being distributed in tranches in order to restore transit service while also saving funds for anticipated shortfalls in the future.

The Transit Transformation Action Plan is a turnaround plan intended to attract more riders to transit. It identifies six transformational outcomes and 27 actions that directly confront some of the most systemic challenges for transit in the Bay Area. Of the 27 actions it includes, here are some of the ones we’ll be engaging in closely.

Even before the pandemic started, MTC and operators began working on a study of ways to integrate fares and provide discounted fares for low-income riders, launching ClipperSTART in July 2020. SPUR has been a longtime supporter of integrated fares and  served on MTC’s advisory committee for MTC’s Fare Coordination/Integration Study and Business Case. The business case is finalizing recommendations like offering free transfers between agencies and fare capping, with the goals of improving affordability and growing the number of riders. Implementation will require both new funding and legislative changes.

The Blue Ribbon Task Force offered a rare venue to reexamine our institutional structures in light of deep uncertainty about the future. Early on, the Task Force recognized that creating a seamless regional transit network that functions like one rational system -- a longtime pillar of SPUR’s transportation agenda -- is essential to creating a better transit network that works for more people. The Task Force recognized that our fragmented institutional setup means that many of the things that need to be done to manage the network as a network are being done by too many agencies or aren’t being done at all. To remedy this challenge, the Task Force identified and prioritized the things that need to be done centrally, and explored four variations to centralize several network planning functions.

As we argued in our report, SPUR believes that a critical missing piece in our institutional setup is a regional network manager, an institution empowered to set regional policy to ensure a consistent transit experience across the region. It’s a governance structure that (1) distributes local policymaking for local services, (2) gives all operating responsibilities to operators-- as they are now-- while (3) centralizing strategic policymaking for regional services and projects of regional significance. We further believe, given the information available to date, that MTC is best positioned to host a robust regional transit coordination function. The Task Force’s early assessment of all four variants further supports this viewpoint.

Source: Adapted from the Access Planning and VIA Architecture for the Blue Ribbon Task Force

Many are wary that MTC is taking on too much too quickly. For instance, it has recently expanded its role in housing, and the policy discussions about network management may also lead to an expanded role for the agency. Some argue that MTC lacks the required expertise, or that MTC’s expanding role is a weakness, signifying a lack of focus. Yet at a time when the region is facing multiple, overlapping crises rooted in the same underlying problems, what seems like mission creep is really a public agency responding to the needs of the public. That’s a change we can get behind.

The Action Plan also recognizes the continued need to secure new funding. Despite two generous rescue packages, there is still a looming fiscal cliff when the funding runs out as early as 2023. Consequently, agencies are being cautious about how they spend the rescue money. Several agencies have not restored service fully or indicated that they cannot fully restore service without a new, stable source of funding.

The outlook is particularly dire for the region’s transit workhorses (SFMTA, BART and Caltrain), which are heavily dependent on fares. How will the Bay Area pay for transit when the one-time federal money runs out in 2023? Bills that expand support for transit operations are underway are still in negotiation. Additionally, recent history shows that major political gains that advance a more equitable society are all too easy to reverse. The region may need to raise the money itself.

The Action Plan commits MTC to convening stakeholders to begin the process of identifying priorities and a funding framework for a ballot measure. Doing so requires grappling with real headwinds: the need for funding to deal with several crises simultaneously, an already too-high cost of living and a smaller ridership base--and thus a smaller political constituency.

We’ve seen what happened when transit was lost once before, and we can’t accept a future without transit. We look forward to partnering in efforts to provide funding for transit, and getting that funding to where it’s needed most.

The pandemic forced the Bay Area to hold up a mirror to the way we organize and operate transportation. We commend the region’s transit leaders for collectively working through challenging but vital issues in the face of extraordinary circumstances. Governance change is hard, and hard things are hard to do. It is even harder while simultaneously battling existential threats and when there are few opportunities to come together, face-to-face as people who are all navigating through an unprecedented moment in history. We see you and we thank you.

Over the last 14 months, SPUR has been working alongside transit agencies, MTC, and other advocates including Bay Area Council, Seamless Bay Area, Friends of Caltrain, Transform, and the Silicon Valley Leadership Group to support many of these changes.

We are thrilled with the commitment that we’ve seen to advance these actions swiftly. MTC already allocated a portion of federal rescue funding to go towards supporting the implementation of integration efforts, resulting in $15 million to-date of discretionary funding being dedicated to improve wayfinding and customer information. Additionally, MTC and operators extended the ClipperSTART program, a means-based fare program to help make transit more affordable to people with low-incomes. Ongoing implementation will signify the region’s commitment to improvement and can help build the public confidence that is needed to secure additional funding.

But our work isn’t finished. SPUR will continue to partner with public agencies to implement the Action Plan. There are many action items we’ll be engaging in closely, as we described above. The Network Management Business case, which will begin this October should answer the question of who should serve as the region’s network manager and begin to inform legislative and funding decisions. We’ll be doubling down on efforts to expand transit priority to make buses faster and more reliable, especially as the region reopens. We’ll also continue  to push for equitable and integrated fares, reforming the management of our bus and rail networks, developing a connected network plan to guide service and to capital planning decisions,  changing what we build and how we build them, and improving hub (station) design.

At the same time, we’ll also be pushing against continued auto-oriented investments. We strongly believe that the road to recovery cannot be filled with cars. It’s why we co-sponsored SB 288 (Wiener) last year to quickly advance sustainable transportation projects and why we are joining state and national coalitions to push for more funding for transit and sustainable transportation, and not towards auto-oriented infrastructure. The only returns we’ll get from auto-oriented investments are negative ones: worsening climate change, income inequality, safety and public health. These weren’t worth funding decades ago and they’re not worth funding now.