Photos by Allison Arieff except where noted.

Urban Field Notes: Designing for People, Not Cars, in Copenhagen

What would it take for mass adoption of biking throughout the Bay Area? It will come as no surprise to urbanists that the city of Copenhagen offers a vision of what that could look like. This past July, I was there as a writer-in-residence at the Copenhagen Institute of Interaction Design, which is a school and startup incubator. During the summer, CIID holds workshops at a satellite location at the United Nations1 and as part of my time there I got to sit in on a few of them, including “Designing for Behavior and Impact.”

As workshop leader Alexandra Fiorillo explained, in the field of behavioral design there are strategies that can be deployed to “ease the change.” In Copenhagen, for example, these are gestures and decisions both large and small that make navigating the city by bike or on foot easy by removing frictions and promoting substitutes for, in this case, driving. The city provides support with planning, policies and implementation —it’s easiest to ride or walk because the city has worked to make it so.

In contrast are “hassle factors” — the small elements that make it harder to do something. Quite simply, Copenhagen has made driving a hassle. Cars are expensive. Gas is expensive. Parking is scarce. There is no Uber, no Lyft. Taxis are hard to find and prohibitively expensive. While many other cities wring their hands about whether to make city centers car-free (which Copenhagen hasn’t done but should) or initiate congestion pricing, Copenhagen has been fully committed to making sure the car is the alternative transportation.

On the first day of “Designing for Behavior,” students are sent off on a scavenger hunt to document examples of design cues in the public realm, transit-related and otherwise. I followed their lead, and here were some of the things I spotted that had done their job “easing the change.” 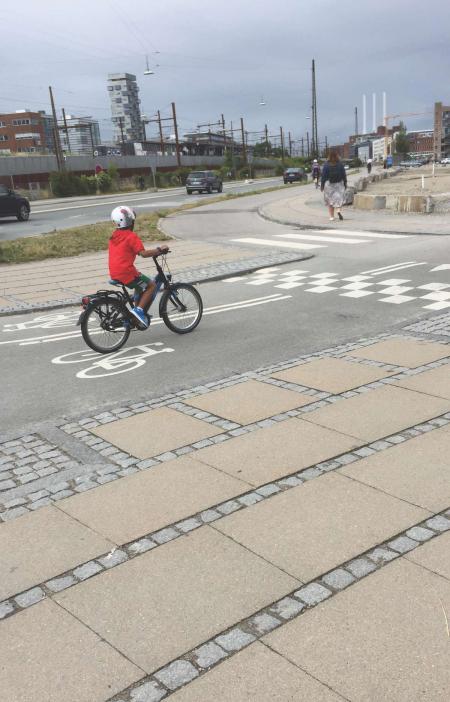 There aren’t just bike lanes in Copenhagen. There are three separate lanes: one for cars, one for bikes and one for pedestrians, each is separated not only by an incremental difference in grade but also by differences in surface (cobblestone paths often delineate walking paths) and color (painted blue pavement indicates the direction of bike traffic at intersections and bus stops). The philosophy is to always take care of the “soft” people (i.e., pedestrians and cyclists) which contrasts sharply with the American tendency to privilege the automobile above all else. 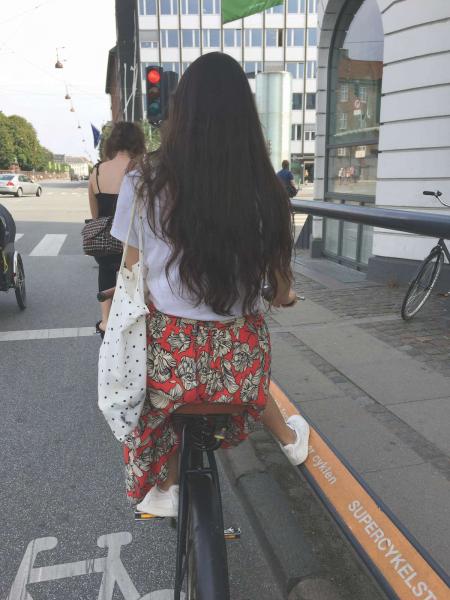 At intersections, you’ll notice these small bits of infrastructure that allow riders to rest a foot on the rail while waiting for the traffic light to change.

Seen throughout the city you’ll notice people wearing something that looks like a somewhat fashionable scarf but is actually an inflatable bike helmet. Not a city policy but a clever private-sector innovation that makes cycling safe and removes the dreaded specter of helmet hair. 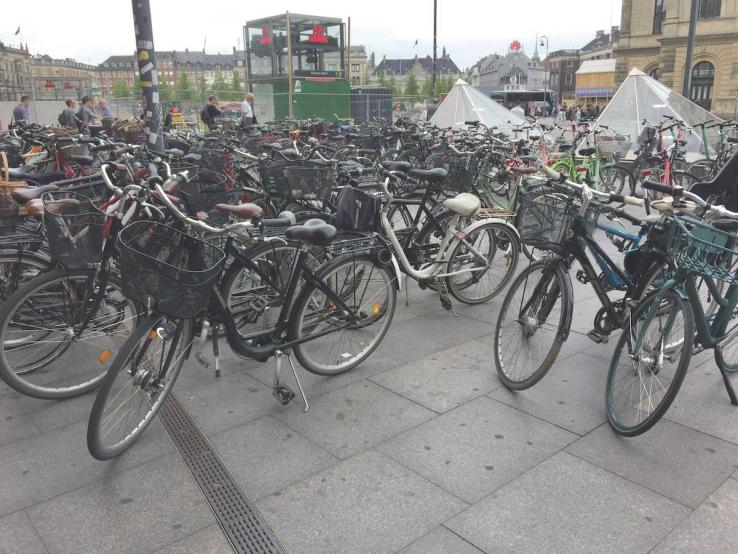 The only seas of parking you see in Copenhagen are seas of bikes (and more recently, scooters). There are bike racks everywhere and where there aren’t bike racks, it is perfectly acceptable to park bikes on any available space that doesn’t interfere with human motion. (I think I saw two cars during my entire week at the UN, a building that houses over 1,500 employees but has parking for only 250 cars.)

Kids’ seats aren’t just for kids. You’ll see people of all ages riding in the bike’s cargo box. It’s not uncommon to see a whole family with one parent riding with the kids and the other cycling.

For me, back at home in San Francisco, the hassle factors outweigh those gestures that “ease the change” but I remain hopeful that we can get there someday.

Allison Arieff is the editorial director of SPUR.