Bay Area urbanism may have no better booster. 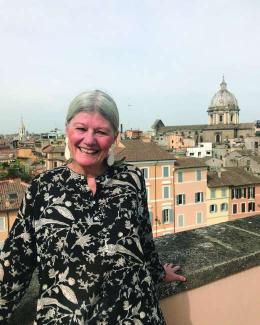 Anyone who meets Diane Filippi will quickly discover she is a force of nature. As the SPUR Urban Center building celebrates its 10th anniversary this year, we wanted to check in with her as she was essential to the project’s success.

Prior to its current headquarters on 654 Mission Street, SPUR occupied a tucked away office on the 4th floor of a building on Sutter Street. But in 2001, Filippi explained, the Board of Directors “felt the need for a permanent home to secure SPUR’s future forever. And also that SPUR needed to bring policy to the general public — sort of a storefront for planning and urbanism. Bringing more people to SPUR was a definite objective.”

Filippi who had previously been a partner at SMWM Architects joined SPUR as director of the Urban Center, working with then Executive Director Jim Chappell and a group of passionate urbanists to make the building, designed by Pfau Architecture, a reality. She explains that she has been “overwhelmed by the success of the urban center. I think we found the perfect site and hired the perfect architect.”

She stepped down as the SPUR Urban Center director in 2015 and is now living an enviable life as an itinerant urbanist and flaneur. When we caught up with her, she was on her way to Italian class while vacationing in Rome: “I’m taking classes at Berkeley. I serve on the boards of SPUR and Mother Jones. I am traveling a good deal and just plain enjoying life!”

I have been fascinated by cities all my life — their vibrancy, diversity, energy. I love cities! I believe my interest originated in my working in architecture for 35 years. It taught me about the importance of the public realm and the way people interact with each other. My major in college was cultural anthropology, so people and place have always fascinated me.

What do you think is the biggest challenge facing the Bay Area right now? And the biggest opportunity?

The biggest challenge is homelessness and outrageous housing costs. As for opportunity: the new wealth (tech world) is always blamed for the dreadful housing situation, but I think they will eventually be responsible for solving [it].

Well, at the moment I’m in Rome, so Rome is number 1. But Paris and New York are right up there.

The intersection of Columbus, Green and Stockton in San Francisco — no one knows what to do, they ignore the lights and intuit their moves!

My favorite recent book was The Color of Law: A Forgotten History of How Our Government Segregated America by Richard Rothstein.