A New Look at the Corporate Campus

How to grow the region’s economic engine more efficiently and sustainably.

By Allison Arieff and Jennifer Warburg

The article is excerpted from our policy report Rethinking the Corporate Campus.
Read the complete report >>

The Bay Area is heralded as the most innovative economy on the earth, but its office environments don’t reflect that. The suburban corporate campus is not creating welcoming, attractive places and is contributing to a range of environmental and transportation problems.

Increasingly, innovation-sector workers value distinctiveness, diversity and walkability — in short, they value urbanism. And although the traditional corporate campus provides a controlled and standardized setting, it presents several problems from the perspective of employers as they work to attract, cultivate and retain top talent. By locating jobs in single-use office parks that are outside the walking radius of commuter transit, the suburban campus model forces people onto gridlocked highways to get to work, wasting time and energy and accelerating carbon emissions.

For more than half a century, technology campuses have followed a standard template: low-slung buildings in suburban locations, surrounded by parking. But in the last decade the Bay Area has seen a proliferation of different campus types, with no single approach predominating. Some are urban, some suburban; some inhabit huge horizontal floors while others occupy tall towers. Irrespective of type or location, however, most aim to present some version of urbanism. Why? Many workers want to be in cities. And so increasingly today’s innovative firms want to be in cities, too.

As cultural tastes shift back toward urban life, suburban campuses are now imitating urban settings (as Facebook’s “Main Street” does) or at least providing amenities commensurate with those found in cities (as at Google). Congestion on the Peninsula is brutal, and public transit is inadequate to meet demand. And workers, especially millennials, are less willing to drive long distances and more likely to want an urban life. Land costs are sky-high in Silicon Valley’s prestige locations, and there are few undeveloped sites left. The kinds of spaces that can accommodate dynamic companies are in short supply.

SPUR has engaged in a yearlong initiative to examine the workplaces of the innovation sector, to understand employers’ decisions about the location and design of their work environments and to advocate for job centers that perform better economically, environmentally and culturally. Working closely with employers, policymakers, analysts and developers, we hope to bridge the longstanding gap between policymakers and corporate decision-makers and to support the development of workplaces that are as innovative as their products. Companies at different stages of growth have very different aspirations and imperatives, which is reflected in their workplace environments.

In the past year, our research has shown that companies are making architectural and locational decisions based on a variety of factors, including:

Cost. Not surprisingly, companies are driven by balance sheet issues including municipality incentives, tax abatements and credits as well as cost per square foot. Last year, for the first time, San Francisco’s average office rents ($72.26 a square foot) surpassed those of Manhattan. Though less of a factor for large companies, cost has a significant impact on startups and smaller companies looking to locate or expand in the region.

The Fight for Talent: Amenities. Above all else, companies are vying to attract and retain talent. As a result, they are engaged in an arms race over amenities like free meals, housecleaning and haircuts, to say nothing of salaries. Accordingly, campuses hope to locate within proximity to talent, support services and amenities.

Uber will move employees into BART-adjacent Uptown Station in downtown Oakland designed by Gensler. The company see the building as an extension of its San Francisco headquarters. Rendering courtesy of Cushman and Wakefield.  ​​

The Fight for Talent: Transportation. Companies have been growing on the Peninsula, but many of their employees prefer to live in San Francisco. Because of increasingly brutal congestion in the Bay Area and weak public transit, employers such as Google,

Genentech and Apple have become transit providers, offering shuttle services to bring employees to and from work. Providing this benefit helps with employee recruitment and retention, plus the commute time on secure, wi-fi-enabled buses is counted as productive work time. Support staff — if they are lucky enough to be staff rather than contractors — tend to live in different communities and are not provided with shuttle service. If time is an employee’s most valuable asset, commute times are a big deal.

Denser site development. As the supply of land dwindles and the cost to buy it rises, many sites are being built or rebuilt at much higher densities, with traditional one- to three-story buildings being replaced by six- to 10-story buildings and surface parking lots by parking structures. Although these densities could support a walkable, transit-supportive urban environment with a variety of nearby services and amenities, they are generally not designed to do so. 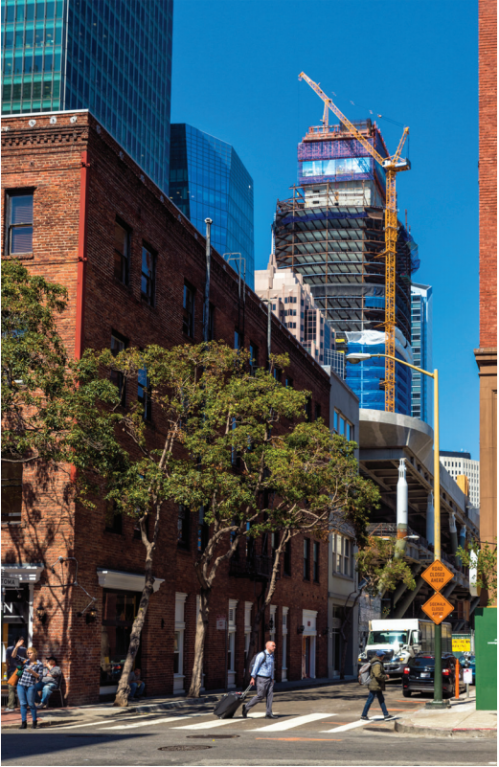 Salesforce believes innovation can happen in a highrise. The downtown San Francisco tower was designed by Pelli Clarke Pelli specifically to promote the health and wellbeing of its inhabitants. Photo by Sergio Ruiz.

Large floorplates … and getting larger. For many employers, a desire for the largest possible floorplates is a driving priority in buying real estate, which makes locating in more urban settings difficult. (Which is not to say there aren’t plenty of companies believe that employees on different floors can still spur innovation.) Multiple buildings are often joined by bridges to create larger contiguous spaces. In most cases 30,000 to 40,000 square feet is considered essential, but floorplates up to 10 times that size have been built.

Growth — and exit — strategies. Companies are scaling up at rates that can be dizzying. Many are intent on finding structures that can accommodate that rapid growth — preferably without needing to move — but also allow for contraction or a quick exit if necessary. It may be that one of the great innovations in the corporate campus is not in architecture but in lease agreements.

Security and privacy concerns. For companies founded on tech innovations, protecting intellectual property is a top priority. The approach to these concerns varies by company and is not universal. Some companies (like Apple) design their buildings with these issues at the forefront, while others like Samsung, embrace a more porous approach. Different companies have different strategies — open vs. secured? single vs. multitenant? — for providing the desired level of security. 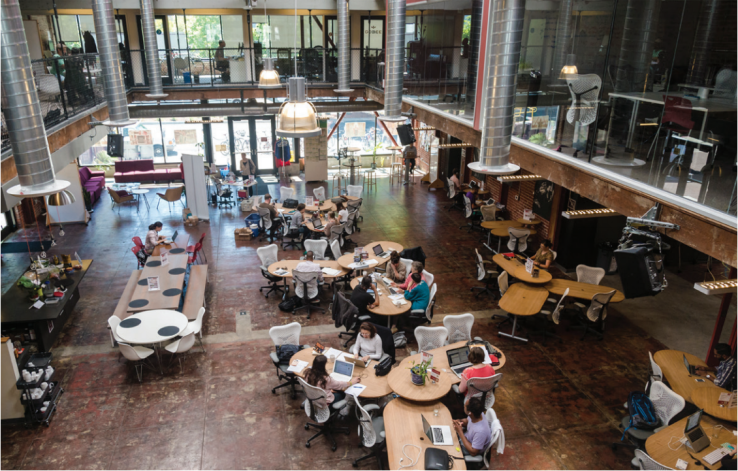 Alternative workspace models have been emerging of late including co-working spaces like WeWork and the Hub, shown here. Photo by Sergio Ruiz.

Securing permission to build. Obtaining project approval from city planning departments is a complex process that can take months or even years. Companies must consider how their choice of a particular location might affect the timeline, the fees they must pay and other conditions of approval. On top of these complications, securing approvals often depends on whether there is the political will to make the project happen.

We are seeing how the traditional form of the corporate campus — resource-intensive, suburban, car-dependent — may threaten the Bay Area’s singular innovation ecosystem. In the last year, the region created 23 times as many jobs as housing units. The perfect storm of high housing costs, overcrowded roads and transit, and NIMBYism is a drag on the national economy.We are reaching a point where only the region’s top companies can compete on salaries and amenities. The region’s increasing congestion and high housing costs are impacting recruitment and retention — the cost of living here is already pushing jobs elsewhere. As SPUR continues its research and finalizes policy recommendations that will be published in early 2017, we’ll explore the ways this critical economic engine can grow more efficiently and sustainably.

When the company ran out of room in Palo Alto, Box made the move to new headquarters in Redwood City, just steps from Caltrain.

Why the Future of Work is Urban: SPUR's Policy Agenda

Increasingly, we are seeing expressions of the urban future of work through specific proposals by companies interested in retrofitting the suburban corporate campus rather than moving into cities. The success of some campuses at achieving downtownlike commute patterns through corporate shuttles and other demand-management practices weakens the conventional critique that the suburban workplace is hopelessly auto-oriented. But these cases are the exception, and a broader transformation will require addressing design and land use, which several new proposals begin to do. Ultimately, the successful implementation of more urban corporate campuses hinges on support from and collaboration with the many local governments that have the ultimate land use decision power.

SPUR recommends that the corporate campus of the future can:

Make efficient use of land: