Creating a strategy to bring St. James Park to life through innovative governance and stewardship.

Throughout the United States, urban parks have suffered neglect and abandonment. Resources for city parks departments are often the first to be cut in lean budgetary times, and are rarely made whole when budgets improve. Maintaining parks in sprawling suburban neighborhoods spread resources thin, while downtown parks are sometimes written off as irredeemably blighted.

San Jose was determined not to let that happen with St. James Park, the challenged two-block green space in the north of downtown. When the City of San Jose asked SPUR to work on the future of park, we began by talking to a variety of city officials, advocates and other stakeholders. What we found was that a robust community conversation was already underway, including “Summer in St. James,” an initiative aimed at bringing the park to life through an intensive campaign of events and programs. The challenge, then, was to find a way to contribute to the discussion without duplicating ongoing efforts or blundering into controversial debates.

These debates include how to address homelessness in the park, whether and how the historic landscape should be redesigned, and the advisability of pursuing a Levitt Pavilion community music stage in the park. Rather than trying to answer these questions (and adding another St. James Park Master Plan to the considerable pile), SPUR turned its focus to creating an institutional framework that could tackle these and many other questions.

Around the country, passionate local coalitions have pulled together to turn challenged open spaces around, creating new stewardship models that draw on the capacities of the nonprofit, business, and philanthropic sectors to complement those of traditional parks departments. These span a wide spectrum of activities, from organizing volunteer cleanups, to mounting concert series, to the entirely independent development and operation of new urban parks. They may be “friends-of” groups, community development corporations, conservancies, or business improvement districts (BIDs), but from New York’s Bryant Park to Philadelphia’s Sister Cities Park – and hundreds more – partnerships are bringing focus, resources and vision to the stewardship of great public spaces.

Critics sometimes chafe at these kinds of public-private partnerships or view them as privatizing an essentially public function. However, it’s important to distinguish the public-ness of the service – parks must be public and open to all — from the public-ness of the delivery mechanism, which ought to be the best and most efficient available while keeping public oversight and labor standards strong. It is a travesty but nevertheless a fact that our public parks agencies are grossly underfunded, and even the best-resourced struggle to deliver public space at the level urban living requires. We should not ask our communities to live without excellent parks — and leave private capacities and resources on the table — until we reach an imagined future of adequate municipal services. 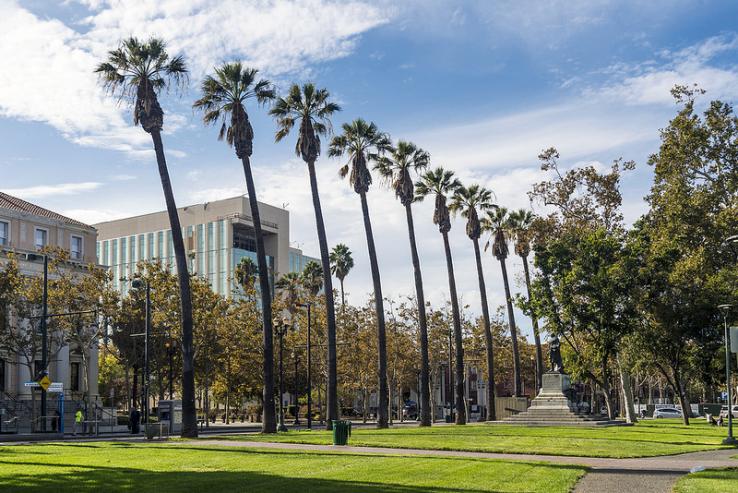 For the St. James Park project, SPUR worked with MJM Management Group, a public-space management firm, to assess the issues and opportunities and assemble case studies on urban parks management from around the country. SPUR held a series of meetings with the many stakeholders who have already been working to improve the park, with a focus on what kind of model would be appropriate to San Jose’s values, politics, and resources. We developed a series of recommendations, which are presented in a recent SPUR white paper, A Roadmap for St. James Park.

The white paper lays out four components of parks stewardship:

1. Management and governance: describes executive decision-making authority, including decisions about the expenditure of resources and the execution of the other three categories described below.

2. Maintenance and operations: from cutting the grass to emptying thrash, this is often the first to be cut and the hardest to fund.

3. Programming and activation: includes events and concessions from coffee carts to large festivals – critical to attracting new users, this is one of the most common elements taken on by outside groups.

4. Funding strategies: may include enhancements to general park budgets, the use of fees or assessments, and the solicitation of private funds through events, concessions or philanthropic support, some of which are inaccessible to public agencies.

Each of these components can be delivered through a variety of mechanisms, from the traditional parks department all the way to private contractors.

SPUR recommends creating a city-sanctioned nonprofit conservancy to provide focused stewardship for St. James Park. It would be created and renewed by the city’s parks commission and city council, and would need to be periodically renewed. Its governing board would have a defined composition which represents the public, nonprofit and business sectors. Once fully established, this conservancy would have the authority to operate, maintain, activate and improve the park, and it would be responsible for securing enhanced funding through a management district, fees, concessions, etc.

To build a strong and inclusive partnership, SPUR also recommends creating this new structure over three phases of increasing commitment, capacity and trust. The first phase would continue the existing activation and programming, which includes enhanced focus from several agencies. The second phase (2016-17) would seat the current adhoc stakeholder group as a formal advisory board, while the conservancy is being chartered and the management district established. The third and final phase (2018) would empower the governing board to make decisions. At this stage, the hard work of forming a partnership and building a new institution should have solidified a multisector coalition capable of tackling the park’smajor challenges and transforming it into the spectacular urban amenity it deserves to become. City departments can then shift focus to other needs and spaces that may not have such exceptional assets close at hand.

If we believe in an urban future, one in which we consume fewer private resources, we must offer great public resources in exchange. Great parks make density livable, make living on foot and transit comfortable, and cement the civic bonds that underlie our democracy. San Jose’s urban transformation depends on and deserves great public spaces. If we learn from successful models and adapt them thoughtfully, St. James Park can thrive.