Cracking the Code on Urban Design

By Kristy Wang and Benjamin Grant

Despite being known for economic innovation and creativity, Silicon Valley’s built environment largely does not reflect either. It is primarily made up of suburban homes and sprawling office parks rather than the dynamic urban environments favored by a new generation of workers. But San Jose, the largest city in the region, has forward-thinking plans for growth, with a strong push to get its residents and employees out of automobiles and onto transit, bicycles and their feet.

SPUR’s 2013 policy report, Getting to Great Places, focused on how San Jose could create better places for people by improving urban design and physical planning. SPUR’s new white paper, Cracking the Code, addresses the public realm in a few different ways— creating basic requirements that put people who walk first; reducing area devoted to parking; and suggesting flexible alternatives around stormwater and fire department access, which compete for space in the public realm and put additional constraints on development sites.

Over this past year, SPUR undertook an effort to look at the zoning code in San Jose and other West Coast cities with the goal of identifying opportunities for San Jose to up its urban design game. (Read our complete recommendations.) The zoning code is the place where cities lay out their requirements and expectations for development. While SPUR appreciates downtown San Jose’s flexibility with regard to land use, we think it would benefit from stronger rules with regard to the physical form of the built environment, both for private development and for the public realm. While San Jose already has design guidelines for downtown and proposed guidelines for the upcoming urban villages, guidelines are just that—suggestions, not requirements. In the past, adherence to design guidelines has been uneven, subject to politics and protracted negotiations over building details.

SPUR suggests a few baseline requirements the city can put in place to raise the bar for urban design in downtown and areas of the city planned for walkable, urban development. Putting these requirements in the zoning code helps set expectations and creates certainty for developers as they assess and plan sites. Developers appreciate certainty, even if requirements are stringent, as it allows them to evaluate and plan for risk. SPUR recommends that San Jose take a two-tier approach and set out both (a) minimum standards to set the ground rules, and (b) suggested guidelines to lay out the city’s more ambitious hopes and aspirations. 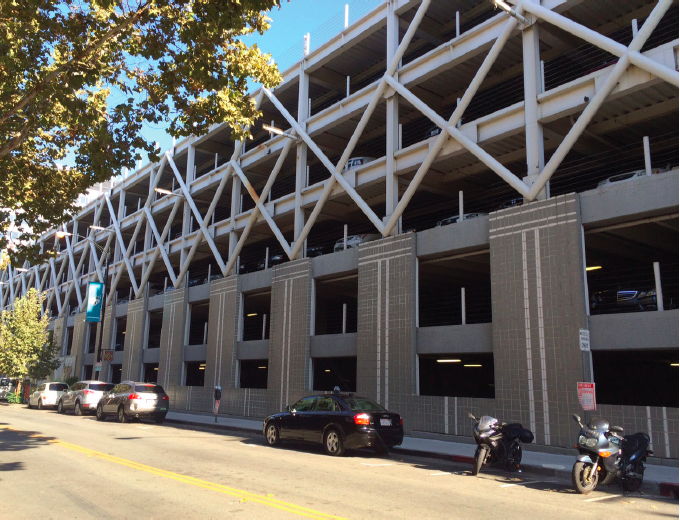 This city-owned parking garage on Market Street/San Pedro Street has blank walls and openings facing one of the most active streets downtown.

To put people who walk first, SPUR’s recommendations include establishing requirements for the dimensions and uses at the ground floor of new development, such as minimum heights and depths that accommodate retail and other “active uses” and requirements for transparency and active uses in ground floor street-facing space. In softer  retail markets like in downtown San Jose and the urban villages, it is unrealistic to expect that all ground floor spaces can be occupied by retail at the present time. Over the long term, however, San Jose is expected to change and grow significantly, and it would be smart for ground floor spaces to be designed to accommodate future retail needs. We suggest that a minimum one-half to two-thirds of ground floor frontages be required to accommodate uses where people can and will enter the building from the sidewalk. Active uses would include not only retail and other commercial uses but also residential lobbies, some office uses, building amenities like gyms and bike repair spaces/storage that open to the street, and others. “Inactive uses” would include blank wall, utilities, garbage, structured parking and garage entries. SPUR’s suggested requirements also include increasing pedestrian entries and minimizing vehicular ones in order to activate and minimize disruption of the sidewalk. 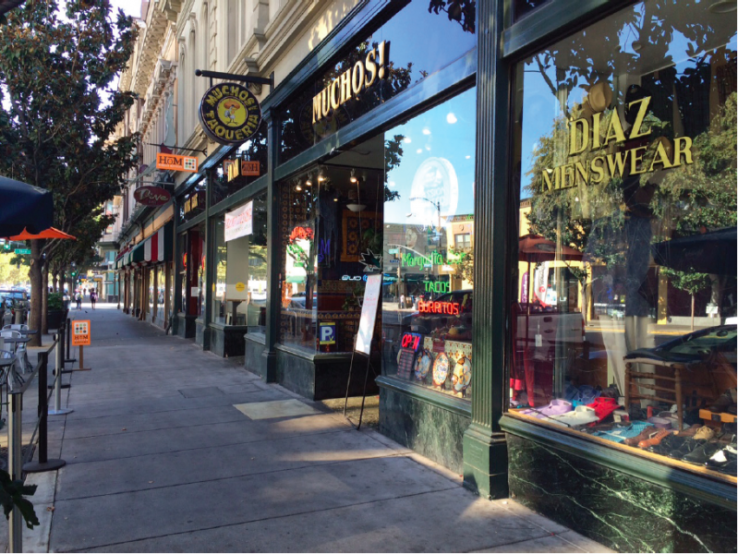 Managing parking supply is another integral part of SPUR recommendations designed to support San Jose’s transportation goals, like getting rid of parking minimums and starting to impose parking maximums. Vehicle storage takes up significant amounts of valuable real estate, and the city should discourage rather than require space devoted to parking.

Lastly, city requirements for stormwater treatment and fire access often undermine the city’s hopes for a better-designed public realm. Current best practices for stormwater treatment rightly focus on treating runoff naturally and close to the source, but they present the urban challenge of being highly land-intensive, and might best be handled at the district scale, integrated with streets, parks and habitat restoration. Emergency vehicle access is single-mindedly focused on getting large vehicles across town and onto sites as quickly as possible, resulting in wide streets and excess pavement, compromising the everyday safety, comfort and needs of pedestrians and bicyclists. Some requirements are outdated and out of step with other cities’ practices, and when multiple regulations like these are layered on top of each other, the resulting constraints make it that much harder to achieve people-focused design. One additional challenge of changing these requirements is that they are laid out or influenced by federal, state and regional regulations, which involve a different sort of advocacy and engagement. There are local interpretations that we believe San Jose could take on more assertively to prioritize the everyday needs of people.

San Jose has already staked out an ambitious vision for its future growth. The challenge ahead will be in aligning its everyday rules, policies and actions with these broader goals. The recommendations in Cracking the Code address just a few of those ground rules, and we think they tackle some of the basic, core decisions that affect the public realm of sidewalks and streets. As Fred Kent, the founder of Project for Public Spaces, explains, “If you plan for cars and traffic, you get cars and traffic. If you plan for people and places, you get people and places.”

For our full recommendations, read our white paper Cracking the Code >>