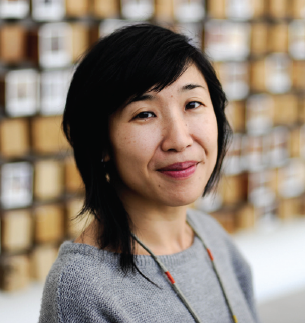 Rena Tom is the self-proclaimed boss lady of Makeshift Society, a coworking space for creative freelancers and entrepreneurs in Hayes Valley. Founded in San Francisco in 2012, Makeshift, which she describes as a place to “connect constructively,” opened a second space in Brooklyn, New York about a year ago.

“I’m an introvert who likes to connect people, places and things, maybe as a way of keeping the focus off of myself,” explains Tom. Side projects she has been developing of late through Makeshift connections include working with a graphic design studio, an artist collective planning a cross-country road trip, and a musician friend starting a record label. Says Tom, “I love having my fingers in many artisanal pies.”

How are places like Makeshift changing the contemporary workplace?

Makeshift is a response to how people want to work, and by people we mean the rapidly growing freelance workforce that has far fewer protections than the employed. We want to be a resource for those workers, and we offer programs in an effort to help close the gap, but the physical locations are the heart of our society.

We’ve moved way beyond a “third place” — every place is a third place. Convenience isn’t everything, though. The sense of community is lost because of this mobility. Makeshift is important because it’s a physical space, a place to be, with other people who have consciously chosen to be there. Even if our members are heads-down most of the day (and they are), the fact that they are all Makeshifters creates a lovely undercurrent of belonging that is hard to develop when you are working remotely.

I really didn’t consider cities much at all until I saw the Zaha Hadid exhibit at SFMOMA in the late 90s. I fell for the activity and motion that could be implied by big, motionless buildings. That turned into an interest in environments, then neighborhoods and then cities.

I heard of SPUR when I moved back to SF from Brooklyn, but was prompted most recently to get involved when my five-year-old spotted an ad inside a MUNI bus for the Urban Cartography show and demanded to visit. He’s a city fanatic.

What do you love most about San Francisco? What does the city need to work on?

I love old weird San Francisco. Seeing people very different than me makes me happiest, so when neighborhoods become too homogeneous, I tend to avoid them. Introducing or allowing inconvenience in a city seems counterintuitive but a city is not an object to be optimized. It’s an eccentric great-aunt to be cherished.

That said, I think San Francisco needs to work on communication. When people don’t know what’s going on, they become afraid or angry or frustrated.  People want to be heard and they want to know things. It seems so basic but I know it’s not simple to solve. Maybe the city can learn from @KarlTheFog, who is great at communication. This Twitter account has helped San Franciscans truly fall in love with cold and grey weather they might otherwise complain about.

The people in Bangkok are exceedingly kind, and the tiny streets of Rome are very charming. Berlin has the right level of excitement and Vancouver’s got the scale. Can I smash them all together?

I have two favorites in San Francisco, macro and micro, both in walking distance of my apartment. First is the city view at Corona Heights Park, which is expansive, well-documented and awe-inspiring. Second is the sunny back patio at the Harvey Milk Memorial Branch Library, which is enclosed, intimate and relatively unknown.

I love “Mundane Journeys” by artist Kate Pocrass.  For a good chunk of the last decade, you could call a phone number and be instructed to go to a different part of town each week. The goal was to slow down and take in a certain detail at that site — poetic glimpses of city life.