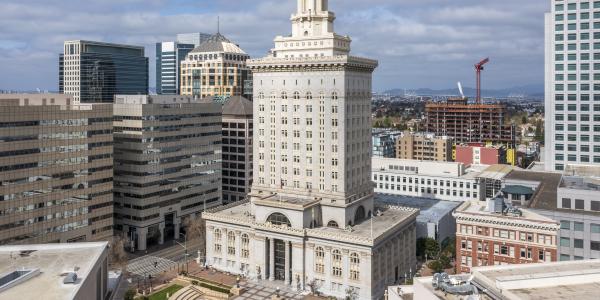 On November 8, Oakland residents will vote on a proposal for city government charter reforms. Measure X will create term limits for City Council members, clarify campaigning protocols for current elected officials and strengthen the role of the city auditor to increase accountability across the city. The measure was authored by Councilmember Dan Kalb, who has said that Measure X is a direct outcome of SPUR’s report Making Government Work, which proposed 10 ways to improve Oakland city governance. While Measure X does not include all of SPUR’s recommendations, it moves the needle on improving governance in the City of Oakland.

Why Are Governance Reforms Needed?

Good governance is critical if Oakland is to solve for persistent challenges such as building adequate housing stock, keeping streets and parks clean, and building a sense of safety and belonging for all residents, particularly those who have been disproportionately underserved by existing systems. A good government is one that ensures the rights of its people and supports their ability to thrive. It should provide programs and services that effectively meet the needs of the people it serves, and its actions should be transparent and responsive to public input. To realize this goal, leaders and government employees should have clear, effective rules for how to interact, know who is doing what and support each other in achieving shared outcomes. Oakland’s current government structure makes this bar particularly challenging to meet.

As we outlined in our report, Oakland has a hybrid form of government, whereas most California cities have either “strong-mayor” or “strong-council” systems. This hybrid structure makes it difficult to establish accountability, since it leaves open the question of which branch of government is in charge. In addition, many of the rules, procedures, processes and norms currently in place limit productive collaboration within and across different branches of government.

As a charter city, Oakland has the authority to define its own governmental structure. Voters adopt a city charter that sets forth the procedures for local governance, and any amendments to the charter must be made through the ballot. Measures can be placed on the ballot either by citizens who gather enough signatures or by City Council.

What Exactly Will This Measure Do?

Measure X would make a total of 10 amendments to the City Charter. Five of them are recommendations from our report. Below we talk about those five in more detail. For our analysis of the complete measure, see the SPUR Voter Guide.

The current system under the City Charter allows the mayor to serve as a tiebreaker in council votes. In some instances where votes of the City Council have been tied, the current system has been manipulated to deny the mayor a tiebreaking vote by having a councilmember abstain instead of voting no. Measure X would automatically make abstentions and absences count as a “No” vote and allow the mayor to break the tie. Legally required recusals would not count as a “No” vote. SPUR discussed the abstention loophole in our report, but we did not recommend requiring that abstentions count as “no” votes, because of other problems it would cause. For example, City Council members could have legitimate conflicts of interest that preclude them from voting on a particular measure, in which case counting their abstention as a “no” vote would not be accurate or appropriate. Instead, we recommended that the mayor have veto power over legislation.

Measure X would provide the City Auditor’s Office with a minimum of 14 staff positions, not including the city auditor. The measure would also more clearly describe the types of audits that the city auditor can perform and would allow these audits to be conducted at the city administrator's request. The measure would also allow the city administrator to review city departments, commissions and programs, as well as investigate allegations of waste, fraud and abuse. The auditor would have the authority to review any city records or property and would need to publish an annual report that summarizes recent audits and recommendations. SPUR recommended that the mayor’s administration should have the ability to request audits, which Measure X would accomplish, as the city administrator reports to the mayor. While SPUR did not recommend minimum staffing, we did call for a budget set aside of the auditor to enable consistency and longevity of the function. Minimum staffing, as called for in this measure, accomplishes this through a different avenue.

Two SPUR recommendations that were not included in this ballot measure are giving the mayor veto power over legislation and establishing an Office of Controller. We believe these to be two of our strongest and most important recommendations and — given how rare charter amendments of this nature are in cities — we see it as a missed opportunity that they didn’t make it into this measure. Despite this, we still believe Measure X to be a transformative measure for Oakland.

Who Supports This Measure?

Measure X has received mixed support across the City of Oakland. It is supported by Oakland Rising, opposed by the League of Women Voters in Oakland and garnered a “mixed opinion” rating from the Black Lives Voter Guide, Oakland. Several of Oakland’s 10 mayoral candidates have discussed their desires for improving the workings of government in Oakland, and Loren Taylor and Seneca Scott have explicitly cited SPUR’s report as a blueprint for this change in interviews. SPUR’s recommendation to create a city controller position, while not included in Measure X, was supported by three of the five candidates who participated in SPUR’s recent mayoral forum.

What Does SPUR Think?

Measure X would not address all of the Oakland’s governance challenges. Primarily, SPUR believes this measure could do more to resolve Oakland’s confusing hybrid governance system by strengthening the role of the mayor. Additionally, the measure does not create an Office of Controller, which we believe is critical for the financial health of the city. However, it does include important changes to help improve Oakland’s government, many of which SPUR has called for, including term limits, the ability to increase salaries for councilmembers, and minimum staffing for the city auditor. Overall, we believe this measure includes many steps in the right direction and is worthy of support.