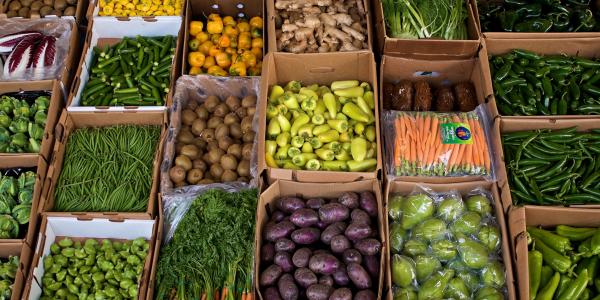 With the onset of the COVID-19 pandemic, unemployment and food insecurity greatly increased in California, and enrollment in CalFresh — the state’s Supplemental Nutrition Assistance Program (SNAP) — went up significantly. Prior to the start of the pandemic, California's SNAP participation rate, the percentage of eligible people actually enrolled, was among the worst in the country, with the state ranking 46th out of 50 states and the District of Columbia in 2018. With California’s high poverty rate and cost of living, this means low-income households feel the effects of poverty more often than those in neighboring states, where participation rates are higher. As need has significantly increased, especially for Black and brown Californians, too many of the state’s residents still don’t have enough to eat. Furthermore, CalFresh participation rates vary greatly across the state because county governments are tasked with managing enrollment in CalFresh, which greatly increases the complexity of the process. This article looks at ideas to help eliminate hunger in California, including automatic enrollment, targeted outreach, state administration of CalFresh, permanently streamlining enrollment and expanding pilot programs that help low-income Californians afford more fresh foods.

Poverty Rates by Race in California, 2019

One analysis conducted earlier in the pandemic showed that in the San Francisco Bay Area, residents of color were disproportionately more likely to experience the negative economic effects, in addition to the health effects, of the pandemic due to higher levels of economic insecurity. This analysis also showed that prior to the pandemic, Black and brown residents were most likely among all Bay Area residents to struggle to pay for food. And as in other parts of the country, recovery from the pandemic has been uneven across sectors. As is typical during most economic recoveries, Black and brown people have experienced a disproportionate share of job losses and have yet to recover the way their white neighbors have. This uneven recovery is rooted in legacies, many of them ongoing, of exclusion from well-paying opportunities and wealth creation in the Bay Area. If people aren’t able to meet their nutritional needs through labor income, then programs like CalFresh become vital to meet this most essential need.

Food Insecurity and Insufficiency in California

In California, food insecurity, the limited or uncertain availability of nutritionally adequate and safe foods, decreased at the beginning of the pandemic,dropping from 10.2 percent in 2019 to 9.1 percent in 2020. This decrease was likely due to federal relief measures such as augmented unemployment insurance and economic impact payments, which reduced hardship for millions of Americans, especially low-income Americans, helping them weather the initial economic shock of COVID-19. In 2018, the year for which data is most recent from the U.S. Department of Agriculture (USDA), SNAP participation was 70 percent, virtually unchanged from participation rates of 71 and 72 percent in 2017 and 2018, respectively. Similarly, state data also showed CalFresh participation at about the same rates in these years as well.

More significantly, CalFresh participation rates vary significantly between counties, with rates ranging from 100 percent in Del Norte county to 45.7 percent in Placer county in 2020. Low participation rates are common across the Bay Area. For example, while in San Francisco participation in CalFresh was 93.9 percent in 2020, it was estimated to be 75.6 percent and 56.3 percent, in 2019 and 2018 respectively. This is because the state has delegated enrollment in CalFresh to county governments, which have varying levels of administrative capacity and policy prioritization. In neighboring Oregon, enrollment in SNAP benefits is managed at the state level, which contributed to the state’s full participation rate in 2018 (according to federal data) .

Food insufficiency, a measure of more severe food hardship that the Stanford Data Lab has recorded weekly since the beginning of the pandemic, has hovered between 8 to 13 percent. This is up to triple the pre-pandemic food insufficiency rate experienced in the state prior to COVID-19. And this hardship has not been shared equally among Californians: Black and brown Californians have experienced the greatest food insufficiency since the pandemic began. The substantial increase in food insufficiency for Black and brown Californians highlights how legacies of exclusion and racism from job opportunities and wealth creation have hampered their ability to weather financial shocks like a recession, pandemic-induced or otherwise. As states begin to roll back temporary flexibility in SNAP requirements, California should seek to make enrollment and participation more accessible, as these roll backs would bring undue hardship on communities of color and low-income people.

One idea worth exploring to streamline CalFresh enrollment would be to transfer management from county governments to the state. States with higher participation rates, such as Oregon, manage enrollment in SNAP benefits at the state level, which greatly reduces the potential for administrative capacity and political priorities to affect enrollment rates. More importantly, this streamlining would create a uniform user experience across the state that could be updated more effectively should changes need to be made to increase accessibility and enrollment.

And while California ranks 46th among all states and the District of Columbia in its SNAP participation rate, the state can adopt a number of measures to ensure that more residents receive the aid they are eligible for. Several states, as well as multiple counties within California, maintain full to near-full participation in SNAP benefits. With the help of these examples, SPUR suggests five ideas that can help close the participation and hunger gap between California and other states:

Certain communities, especially low-income and immigrant ones, are unlikely to sign up for public assistance programs due to resource and language barriers. Since 2011, Oregon, which has a 100 percent participation rate, has invested in this type of outreach to reduce barriers to enrollment. The state has remained a consistent leader in enrolling communities that most benefit from SNAP benefits.

State governments already have data, such as income, about those who participate in other assistance programs. Agencies could use this information to identify which residents are currently eligible but not receiving CalFresh benefits. Countries around the world allow people to file their income taxes simply with pre-filled forms that use already existing data, saving participants hours and resources. Taking a similar approach to SNAP benefits could greatly increase enrollment.

The state could employ the methodology currently used by the USDA to offer meals to children in low-income areas to automatically enroll more low-income residents in CalFresh benefits. This approach to reducing food insecurity among children has greatly increased participation rates in free and reduced lunch programs and has led to substantial improvements in educational and health outcomes.

Since the beginning of the pandemic, states like California have taken advantage of temporary flexibility in federal SNAP enrollment requirements to more easily enroll eligible residents. While the state has applied for renewed waivers for these flexibilities, where possible the state should seek to permanently retain them.

The high cost of fresh food is a major barrier to access for many low-income families in California. In response, many organizations, including SPUR, have started fruit and vegetable supplemental benefit programs — also known as healthy food incentives — that make fresh foods more affordable for CalFresh recipients. SPUR has a long-term goal of making these programs a permanent supplement to CalFresh and co-sponsored state legislation last year that would take a large step in that direction.

Mending the Net: Fixing the Holes in California’s Safety Net