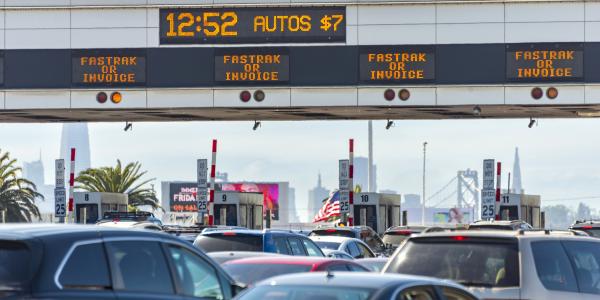 Challenges in the San Francisco Bay Area, documented in our report, brought the issue of toll fines and fees to the forefront of the conversation about equitable enforcement policies. During the pandemic, bridge tolls takers were removed from their booths due to public health concerns, and the region shifted to an all-electronic toll collection system. Drivers without a FasTrak electronic payment account were mailed an invoice, which went to the address where the car was registered. Many drivers, unfamiliar with the new system, quickly accrued large debts: Millions of tolls went unpaid, and some drivers racked up tens of thousands of dollars in fines and fees. These fines and fees disproportionately impacted low-income drivers, who could not afford to pay large sums of money and who were more likely to have paid tolls in cash before the switch to all-electronic tolling. In addition, challenges in the existing notification systems made it hard for people to find out how to pay tolls under the new system.

At the same time, toll agencies were not required to offer payment plans for people who could not afford to pay in a lump sum, which left many struggling to come up with the necessary money. When drivers didn’t pay their fines and fees, the Department of Motor Vehicles would eventually place a “registration hold,” which prevents a person from renewing their car’s registration until they have paid their debt in full. For many low-income drivers, that meant letting their car registration expire while they tried to save up enough money to pay off the debts.

Our report raised how these same problems impacted people who used the region’s toll bridges. SPUR’s research showed that unpaid toll bridge fines and fees fell disproportionately on communities of color, low-income communities and immigrant communities across the region. In response to our findings, the Metropolitan Transportation Commission (MTC) began working to reform its systems in order to produce more equitable outcomes. MTC first lowered its fines and fees, from a maximum cumulative penalty of $70 to $15, and then began a process of developing other important reforms, such as payment plans.

These changes will provide immediate relief to many drivers across the state, but more must be done in order to build the most equitable systems possible. California needs to create more flexible and functional payment plans, notify people of tolls, fines and fees in multiple ways so they’re not surprised by missed payments, automate the reduction and elimination of fines and fees for lower-income people (as is done in traffic courts across the state) and make other necessary reforms. Future advocacy and research will build on the foundation of AB 2594 and the reforms made by MTC, and will be vital to making sure that California builds a just and equitable tolling system.