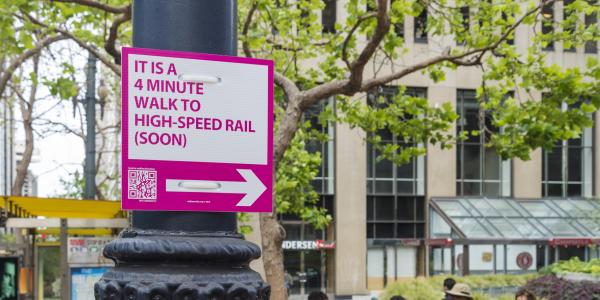 Beginning in the 1970s, California’s leaders started to envision a way to connect the dense, urban coastal areas of the Bay Area and Southern California with the San Joaquin Valley via high-speed rail. A majority of California’s voters continue to support high-speed rail and the vision it can help the state achieve. A fast connection between the San Joaquin Valley and the coast could create significant economic growth to uplift cities along the route. An electrified train could help address air pollution in a region with some of the worst air quality in the country and create a clean way to travel across the state. In 2008, California voters agreed to devote approximately $9.95 billion to develop a high-speed rail system that would connect the agricultural communities of the San Joaquin Valley — such as Merced, Fresno, Kings/Tulare and Bakersfield — with the coastal cities of San Francisco and Los Angeles. High-speed rail is currently under construction in the Central Valley.

When complete, California’s high-speed rail system will fundamentally change people’s mental map of the state by making more places more accessible. Residents of Fresno will be about an hour and a half away from both San Francisco and Los Angeles, as opposed to up to three hours away by car.

High-speed rail is more than a fast train. Stations can be anchors of public life and act as the “front door” to the cities along the route. By orienting more growth around these stations, cities in the network can also provide a foundation for how the state grows more sustainably in a world with a warming climate and more frequent, more damaging fires. By directing development in and around neighborhoods in station cities, California high-speed rail can also help stop sprawl and preserve the natural environment and greenfield areas under threat of development.

Over the summer and fall of 2021, SPUR, in partnership with the California High-Speed Rail Authority, produced a series of webinars to help the California High-Speed Rail Authority and station cities on their planning journey for high-speed rail stations and station areas. This article draws out some of the key themes and best practices we learned about, along with the concrete steps station cities and the authority can take to get the most from this generational investment.

“If high-speed rail arrives and nothing is there, then people will go somewhere else.” — Andreas Heym, Founder, Andreas Heym Planning and Design

“A station is a piece of the city that is welcoming to the traveler.” — Andreas Heym

High-speed rail creates a network of places at multiple scales that reinforce each other, creating a key opportunity for station cities. At the network level, this investment creates fast new connections between places that were not previously connected. When completed, the high-speed rail network will connect eight of the 10 largest cities in California. The vision of high-speed rail can only be accomplished if we think of the station cities as a set of destinations that function better when connected.

At the local level, stations and the neighborhoods around them can be great urban places where people choose to spend their time — whether or not they ride the train. Local placemaking efforts can also help establish a city’s unique identity. And thinking of each city as part of a unified vision for the statewide network can open up new ways to experience the diversity of California. Cities in the Central Valley have the most to gain from concerted placemaking and identity-building efforts, which can help make these cities destinations, rather than places to pass through.

Steps to create a network of places:

The authority should build on prior efforts to work with cities to create consistent, identifiable station elements such as wayfinding signage, ticketing desks and platform canopies that people can associate with high-speed rail in any station city.

“Infrastructure is a very serious word. But I think there are opportunities to incorporate delight and joy and surprise into these places so that they are memorable.” — Kokila Lochan, Principal, VIA

“We try to elevate the culture of the existing community in search of permanence.” — Jason Foster, President and Chief Operating Officer, Destination Crenshaw

Central to the idea of creating a network of places is ensuring that stations and station areas express an identity and feel like a welcoming, humane place. Station design is an opportunity to elevate what is unique about every single one of the station cities in California, whether it’s the city’s geography, climate, social economic history or future.

Steps to accentuate identity and place:

“Density is a responsibility when it comes to an investment like this.” — Amit Price Patel, Partner, Urban Designer and Architect, DIALOG

A chief benefit of high-speed rail is that it has the potential to grow California's economy and share prosperity more evenly between regions, shaping California’s economic geography for the next century. If high-speed access can successfully draw investment in each of the station cities, high-speed rail will not only connect residents of the San Joaquin Valley to economic opportunities on the coasts, but will also make each station city more livable and bring economic diversity that will benefit current and future residents.

However, speakers cautioned that high-speed rail’s improved accessibility on its own is unlikely to change the economic trajectory for a station district, especially in Central Valley cities, which tend to have weak real estate markets. Success requires concerted planning and a coordinated land development strategy. In weak real estate markets, market rents and sales prices for multistory commercial and residential development — the types of buildings needed to make the most out of high-speed rail — are not high enough to cover the cost of building them.

In addition, speculation can stifle the timely development of land because people may buy vacant or underutilized land and hold it until the market is strong enough. Additionally, greenfield development is cheaper and easier to build than compact, higher-density growth. Getting growth to happen before, or alongside, the arrival of high-speed rail service in these places requires planning tools, financial subsidy and persistence. Cities need the appropriate tools to manage large-scale station area development, including planning and zoning, land acquisition, infrastructure financing and gap financing for new development. With the right tools to finance and manage station area development, California could see more jobs, housing, and other types of urban growth concentrated around high-speed stations.

These challenges elevate the importance of continuing collaborative efforts between the High-Speed Rail Authority and station cities to develop and implement station area plans, create site development plans, determine civic infrastructure needs to support new growth and more, as the authority is currently doing in Palmdale, Bakersfield, Merced and Fresno.

The COVID-19 pandemic creates an unexpected opportunity for Central Valley cities because it is changing how and where people work and live. A permanent hybrid work model, where many workers will only be required to be in an office part-time, makes people more tolerant of longer commutes. More affordable Central Valley cities on the high-speed route — like Fresno, Palmdale, Bakersfield and Merced — may be more attractive for workers who can work completely from home or infrequently commute to the office in other parts of the state.

Steps to focus growth around stations:

High-speed rail can and should be a catalyst for new development, including commercial development as well as both market-rate and affordable housing. The statewide housing crisis requires the authority and station cities to be especially attentive to the potential for high-speed rail to increase property values near stations and to proactively take steps to avoid displacement.

The development of neighborhoods in and around high-speed rail stations should result in more housing and economic opportunities. Yet many are wary of new development because it can seem to foreshadow residential displacement, gentrification and a sense of feeling out of place in one’s community. Various studies suggest that new market-rate housing may lower prices regionally but increase them locally, that it may lower the rent for higher-priced housing units while increasing the rent for lower-priced units, and that it may lower rents and sale prices but increase the number of high-end amenities, which may or may not contribute to increased housing demand.

This suggests that, as a catalyst for housing growth, housing prices could be lower regionally yet higher locally, and that traditionally affordable units could become more expensive.

New housing around high-speed rail stations is a good thing; even now, many cities that will be served by high-speed rail are some of the fastest growing cities and are experiencing exploding costs. But it will not be sufficient to build enough market-rate housing; the high-speed rail cities must also protect tenants and build affordable housing to mitigate displacement and cultivate a sense of belonging. There will not be a one-size fits all solution but many mutually reinforcing strategies and different approaches for different markets.

Strategies to protect against displacement:

“ In many ways, high-speed rail is one way to catalyze a different way to move around the state.” — Laura Tolkoff, Transportation Policy Director, SPUR

High-speed rail is fundamentally about changing how we move and grow as a state, adding a new, more sustainable way to travel between cities that simply doesn’t exist today. But when many communities lack basic transportation infrastructure, it’s easy to get disillusioned about these grand ambitions. California and its cities should continue investing in networks of safe and accessible bicycle, pedestrian and local transit infrastructure today, while also building toward an integrated statewide transit network.

High-speed rail plays an important role in a transportation network, but it cannot be expected to do everything. Sidewalks and bike lanes support walking, rolling and biking within and between neighborhoods. Buses support travel within cities and between cities, and occasionally between counties and regions. High-speed rail is best suited for serving the intercity travel needs of cities — especially dense ones — rather than either cars or airplanes. For instance, high-speed trains do not get stuck in traffic and travel at much higher speeds compared to cars. Further, they provide a way to travel between cities without relying on polluting modes of transportation. Door-to-door travel times can compete with airplanes because train stations are typically closer to most people’s origins and destinations.

Each type of transportation infrastructure is needed, and we should continue to invest in local transit, pedestrian and bike networks. High-speed stations can also support mobility at every scale and provide real benefits to people living near future high-speed stations today.

Steps to improve sustainable mobility across all scales:

High-speed rail has the potential to drastically reshape California culturally, economically and geographically and to position the state as an economic and cultural leader within the United States and around the world. To fully realize these benefits, the investment in a fast train must be combined with targeted policies and investments to grow and share economic prosperity, create great places, stabilize and grow communities, and improve mobility at all scales.

Watch the recordings from our of webinars, produced in collaboration with the California High Speed Rail Authority: