SPUR’s Vision for a San Francisco That Welcomes Everyone 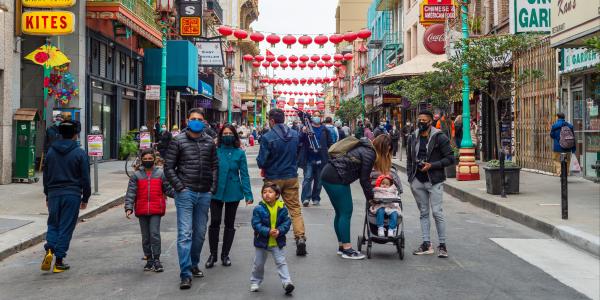 As the new San Francisco director at SPUR, I am excited to build our policy, research and advocacy agenda for the city of San Francisco, in the service of advancing a more equitable, sustainable and prosperous city and region. SPUR has a long history of bringing people from a wide range of perspectives together to develop urban policy solutions in San Francisco. At the same time, many people of color and low-income San Franciscans have historically been marginalized in urban planning and decision-making, resulting in vast inequalities based on race and income. In my role at SPUR, I look forward to advocating for policies and legislation that can tangibly improve people’s lives, especially for low-income San Franciscans and communities of color.

San Francisco is a city that offers great opportunities. It is physically compact, walkable and connected to green spaces. It contains a jobs-rich downtown hub, quiet residential neighborhoods, bustling cultural districts and vibrant commercial corridors. San Francisco is a dynamic city, frequently at the bleeding edge of innovation and creativity. At the same time, it is a city of contradictions. San Francisco holds the number three spot for the city with the most billionaires in the world, but one in four San Franciscans faces food insecurity. The median home price in the city increased by 15% in the last year to nearly $1.9 million, yet San Francisco is on the top ten list of cities with the highest rates of homelessness. While an extensive rail, bus and ferry system connects people who live  close to the core of the city to many of the region’s job centers, residents of neighborhoods like the Richmond and the Bayview have fewer transit options and often experience long and unreliable commutes.

These disparities have come into sharper focus during the course of the pandemic. Challenges that have existed for years — the lack of affordable housing, income inequality, declining infrastructure, environmental degradation — have been magnified during this crisis. It’s also clear that working on solutions in SPUR core areas of housing, transportation, land use, economics, food access, sustainability and resilience is more important today than ever.

Confronting these challenges will require new partnerships between government, businesses, developers and communities. It isn’t just about collaborating across sectors, but also about finding new ways of working together that break silos and lead to equitable outcomes. In the last two years, I have been inspired by the new and innovative civic partnerships that have come about to address the urgent needs of the city’s most vulnerable residents. San Francisco’s city government has reorganized itself to create the entirely new Alternative Shelter Program to provide emergency housing for people experiencing homelessness. City departments, libraries, nonprofits and families came together to create the Community Hubs Initiative, providing the education and support that so many children needed when schools were closed. These examples show us what is possible if a cross-section of people can work in genuine partnerships, and if San Franciscans are open to doing things differently than before.

I believe that many of SPUR’s goals for a more prosperous, sustainable and equitable city have been hindered by false narratives that suggest that urban growth and development is a zero-sum game. Under this mental model, it isn't possible to build new housing without creating displacement, transition to renewable energy without killing jobs or rebuild city infrastructure because of a lack of financial resources.

But what if San Francisco’s communities and leaders were able to develop a mindset of abundance? What if we embraced the idea that we can welcome new growth because it makes us stronger and more resilient? Is it possible for us to build much-needed housing for San Franciscans and also close the racial wealth gap? Can we restructure our archaic public financing systems and create more progressive funding sources to widen our safety net? Can the transition to clean energy help to drive economic development and create other social and health benefits?

Changing mindsets is not easy. It requires San Francisco’s civic leadership — including SPUR — to accept that we have to let go of some of our old assumptions and practices. We have to step out of our comfort zones and acknowledge that our past policies and systems have created and perpetuated racial injustice. We must build new, authentic relationships between residents, government, businesses and other institutions to gain trust. It is only through sustained dialogue and civic engagement that we can begin to build a sense of belonging and develop a policy agenda that leads to systemic change.

Over the coming year, SPUR will be conducting research, education and advocacy across seven policy areas in San Francisco. We will embrace growth and change as tools for achieving our vision for a healthier, more livable city that welcomes everyone. We will focus on downtown reinvestment, exploring the types of policies and resources that will be needed to build a downtown district that is both prosperous and inclusive. We will continue to advance housing solutions that reduce costs and improve community stability, and investigate new models to support wealth creation for low-income households and communities of color. We will also promote improvements to the transportation network to make it easier, faster and less expensive to get around without a car.

I look forward to connecting with you as we implement our agenda for San Francisco.