Shining a Light on the Invisible Costs of Driving 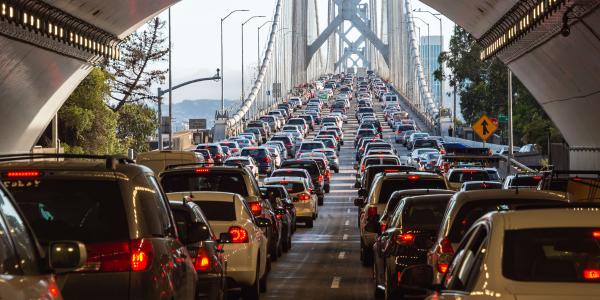 What does “getting ready to go” look like for most people? It often means gathering a wallet, bag, phone and, last but not least, car keys. For many people, and for many trips, getting somewhere means driving. Driving is the default option because it is most often easier and cheaper than carpooling, transit, biking or any other alternative. This has been especially true during the COVID-19 pandemic, when many have opted to stop sharing space with others on transit or in shared rides.

The ease of driving has much to do with the fact that the Bay Area was built to accommodate and prioritize the car: Consider the region’s vast array of streets, roads and parking lots, as well as the distance between neighborhoods and job centers. This car-oriented landscape effectively subsidizes car travel over other modes. For example, roads and parking are expensive to build, but they are mostly free for drivers to use as much as they’d like, whenever they choose. While this kind of free access lets people work, play, run errands and more, each individual’s driving imposes serious costs on others. These costs come in the form of traffic and lost time; climate pollution and its resulting fires, floods and heat; and local air pollution and the heart and lung disease it brings, especially for the young, the elderly, people with low incomes and people of color. In other words, giving cars free priority means travel takes longer, our climate is less stable and the most vulnerable among us are sick more often.

SPUR’s new report Value Driven shines a light on the invisible costs of driving and offers five pioneering strategies to address them.

The True Cost of Driving

City planners and policymakers have tried to address the negative impacts of car travel by either building more roads (to solve traffic) or by building infrastructure for more bikes, trains or buses (to encourage people to take these modes). And yet, traffic has not been solved and people still drive alone most of the time. An over-reliance on driving alone is not likely to change until driving is no longer the cheaper, faster or more convenient option. To help level the playing field between driving and other modes, drivers need to face the true costs of their trips. That is, the price of driving needs to reflect the costs it imposes on others.

While these benefits are also needed in the Bay Area, discussions of using pricing to solve the region’s transportation challenges bring up concerns about equity. In an already expensive region where so many struggle to get by, would pricing be fair?

Answering this question requires looking at how pricing would financially affect different drivers — and it means taking a serious look at the fairness of the status quo. The truth is, our excessive reliance on driving alone already creates inequities. Children growing up near freeways, who tend to be Black, Latinx or low-income, often have poor lung function for life due to emissions exposure. People with low incomes pay disproportionately more of the sales taxes that help fund roads, even though some of them can’t afford a car or drive less than those with higher incomes. Households with low incomes are more likely to overlap with areas prone to flooding from climate change, which is fueled by everyone’s driving. Less driving would help lessen these inequities.

As part of the SPUR Regional Strategy, Value Driven helps envision a more equitable, sustainable and prosperous future for the Bay Area and recommends policies needed to get there. It complements other Regional Strategy reports that outline the roles of the public and private sectors in delivering alternatives to driving alone. This report takes the position that over the next several decades, we as a society need to rethink what we pay for directly and what we expect for free. It imagines a future where the many indirect costs of driving are diminished and the streets are quieter, safer and filled with more pedestrians, bikes, transit and carpools. A future where climate change has been kept at bay and where the air is clean for all. In this future, people pay each time they drive and are rewarded with lower prices and incentives when they don’t. In addition, the way they pay for transportation is different. With a single platform where travelers can pay for tolls, parking, transit, shared scooters and more, people can more clearly see the cost of driving versus other modes, receive rewards and ultimately buy trips instead of cars.

Five strategies will help bring this vision to fruition.

Policymakers and communities will need to co-design how to replace existing hidden prices with more transparent policies such as parking and congestion charges. It will also be critical to use subsides or discounts to ensure no additional harm to drivers with low incomes.

Strategy 2: Encourage alternatives to driving alone through pay-to-park charges, incentives and limiting the oversupply of parking.

There are as many as four parking spaces for every car in the United States. When parking is easy, driving and its hidden costs come easily, too. One key move will be to adjust policies to rein in the oversupply of parking. In addition, drivers should face the cost of parking every time they park (no more monthly passes) and be offered viable alternatives to driving alone, along with region-wide incentives for using other modes. Taken together, such a suite of policies could transform how people travel and drastically reduce the hidden costs of driving.

Various forms of local traffic congestion can and should be tackled through the policy that best suits the context. This can include tailored parking rates, downtown congestion charges, better enforcement in carpool and express lanes on highways, and future all-lane tolling on congested highways that run parallel to high-quality transit.

Road user charges should replace the state gas tax, which is declining as cars become more fuel efficient. This would more fairly charge people for the driving they do, and will stabilize transportation infrastructure funding.

Pricing policies should be coupled with Spare the Air days to help meet the region’s clean air goals. In addition, an open-payment pricing platform could make the relative prices of different modes clearer, offer millions of people incentives to avoid driving alone at the same time, help govern subsidies for drivers with low incomes, and reduce the administrative costs of key pricing policies.

Ultimately, these strategies will enable a future where drivers pitch in a bit more and we all get cleaner air, quicker trips, safer streets and a more stable climate — free of charge.