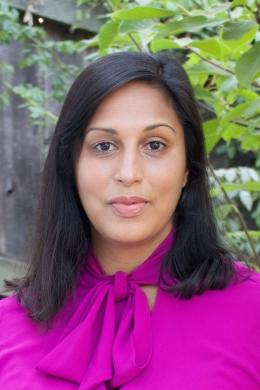 SPUR is pleased to announce that Ronak Davé Okoye has joined the organization as Oakland director. SPUR Oakland Board Chair Dahlia Chazan says she’s excited to welcome Ronak to SPUR: “She’s an Oaklander who will be serving her community, bringing new ideas from other cities and from her experience helping government agencies really listen to the people they serve.”

Ronak joins SPUR from the San Francisco Public Utilities Commission, where she served most recently  as Director of Community Benefits. In this role, she was responsible for overseeing SFPUC's significant investments in workforce, arts, education and environmental justice. This included connecting communities to jobs in the utility industry, overseeing millions of dollars of public art investments in the communities SFPUC serves, developing a K-12 ecoliteracy and STEM curriculum to educate future stewards of water and power resources, and opening SFPUC land to urban agriculture. Ronak is most proud of her work leading the utility’s  affordability and customer assistance strategies to deepen our reach and impact and ensure access to critical water, power, sewer services to communities during the COVID-19 pandemic.

She has taken the role on with the desire to deepen the organization’s connection with community leaders and neighborhood voices. “I’m honored to step into the role of Oakland director at SPUR and inspired by the deep history of social justice in the City of Oakland,” she says. “Our work is to build on this foundation toward a more equitable, sustainable, and prosperous future for the city.”

Ronak has dedicated the last decade to leadership roles in the public sector. Prior to her work at the SFPUC, she served the San Francisco Mayor’s Office as Deputy Director for HOPE SF, the nation’s first large-scale community development and reparations initiative aimed at creating vibrant, inclusive, mixed-income communities without mass displacement of the original residents. In this role, Ronak oversaw the overall operations of this multi-sector initiative and developed policy and program responses to historical and structural disinvestments in education, economic advancement, and health & wellness systems in these communities.

Her foundations in government were built working with Mayor Thomas Menino in the City of Boston. As an Urban Mechanic Fellow in Mayor Menino's office, she worked directly with him on health equity initiatives including Boston's programming for First Lady Michelle Obama's Let's Move campaign. She cites her early career in the technology sector for her principles in human centered design and agile management, which undergird her constituent-driven approach to government.

Ronak’s background has helped her create a vision for Oakland that puts people first. “It’s my desire to build spaces of collective innovation, policy and healing across all sectors of community and economic development,” she says. She draws her inspiration from the City of Oakland: “I see​  the city’s racial and​ economic diversity while acknowledging the threats of displacement for our lower income and BIPOC residents. I’m ​​humbled by the deep range of experiences and needs represented in Oakland and see the potential for SPUR to have positive impacts on this city’s future.”

Ronak also dedicates her time to many advocacy efforts, most notably the development of Pro-Voice, a movement to elevate personal story sharing as a way to shift culture around highly stigmatized and politicized issues. ​In her role as Oakland director, Ronak will implement SPUR’s vision for change through local action and ensure that it is informed by local context.