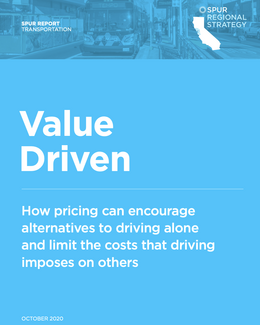 For many in the Bay Area, getting somewhere means driving. It’s the default choice because it’s most often easier and cheaper than any other option.

The ease of driving has much to do with the way the Bay Area was built: Our car-oriented landscape effectively subsidizes car travel over other modes. Roads and parking are expensive to build, but they’re mostly free for drivers to use as much as they’d like. This kind of free access exacerbates the serious costs that each driver imposes on other people: traffic and lost time; climate pollution and its resulting fires, floods and heat; local air pollution and the heart and lung disease it causes, especially for people with low incomes and people of color.

Our reliance on solo driving is not likely to change until it's no longer the cheaper, faster, more convenient option. To level the playing field between driving and other modes of travel, the price of driving needs to reflect the costs it imposes on others. SPUR’s report Value Driven shines a light on the invisible costs of driving and offers five strategies to address them.