By Joshua Brett and Jaclyn Tidwell 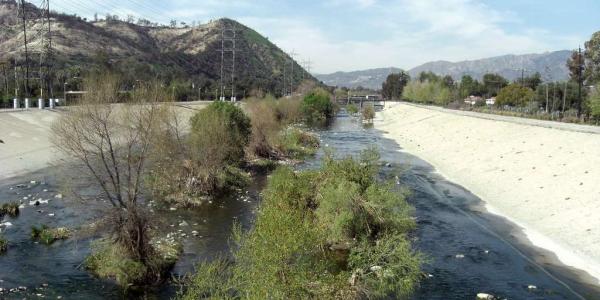 Though channelized for most of its 51 miles, the Los Angeles River provides habitat for more than 200 species of birds and animals. Efforts to revitalize the river hold lessons for San Jose and Guadalupe River Park. Photo courtesy flickr user Roy Randall.

As downtown San Jose plans to add new jobs and transit connections over the next decade, the city has a unique opportunity to reimagine the underutilized Guadalupe River Park as the green centerpiece of an expanded city center. To further this vision, SPUR has invited a series of prominent speakers to San Jose to learn from their successes and challenges with urban park, river and infrastructure restoration projects. At a recent SPUR forum, Omar Brownson of River LA shared his experience leading the charge to revitalize the Los Angeles River. Brownson and River LA have worked to build broad community consensus around an integrated vision for design and infrastructure along LA’s massive but often overlooked urban waterway. River LA’s focus on an integrated collective vision offers lessons for San Jose as the city seeks to re-envision the Guadalupe River Park.

The Los Angeles River of Yesterday and Today

The first planning step was to consider the river’s size. From its headwaters in Canoga Park to its mouth at Long Beach, the river runs 51 miles, passing through 17 cities in Los Angeles County. Its watershed serves as a home to more than 200 species of birds and other animals.

Although it’s often portrayed through images of ocean beaches, the City of Los Angeles grew up around the river, and its thriving downtown sits directly adjacent to its banks. Until the early 20th century, the river brought both life and peril to the growing community: It was the source of the city’s drinking water and of frequent deadly floods. After one particularly destructive flood in 1938, the Army Corps of Engineers began to channelization sections of the river, and it started taking its current concrete form. Restoration of the river has been proposed since the late 20th century, but projects have been piecemeal, funding has been scarce and plans and agencies have often been at odds.

An Integrative Vision Across Cities and Agencies

In 2007, the City of Los Angeles founded River LA to break through an impasse over river restoration and move the river’s revival forward. However, the city contains only 32 of those 51 miles, so it quickly became critical to collaborate with the other municipalities along the river’s path. In 2015, River LA inaugurated the Greenway 2020 plan, the first project to take a holistic view of the entire river by proposing to connect all 51 miles with pathways by 2020.

While the work is still in progress, the ambitious project received an enormous boost with the 2016 passage of Los Angeles County Measure M, which dedicated more than $425 million to restoring the river. In an instant, the total funding for river restoration was doubled. With this windfall, River LA now had the funding to think big and create a multimodal plan for the river that could bring together the diverse communities that reside alongside it.

River LA pitched the idea for a new, holistic approach to river restoration to Frank Gehry and Laurie Olin, renowned architects of iconic structures and landscapes. They agreed to participate but insisted that they would need to fully understand the river, its environs and the people who use it before beginning the project. Thus began a two-year process that included hundreds of public listening sessions to hear what residents wanted most from the river, meetings with government officials, local stakeholders and nonprofits, and reading every previous plan proposed for the river.

The results of this iterative process have been catalogued in the LA River Index. The index breaks down the functions of the river into several categories: Flood Risk Management, Water Recharge, Water Quality, Greenhouse Gases, Ecology and Habitat, Parks and Open Space, Public Health and Social Equity, Transportation, Arts, and Cultural and Recreational Programming. Bringing the different functions of the river together allows for a more comprehensive vision, greater understanding of the opportunities and trade-offs of different uses and more effective collaboration. This in turn will help create multipurpose infrastructure and a river that better serves everyone.

River LA has continued to engage with groups and residents at the grassroots level, collaborating with the Lower LA River Working Group, a network of stakeholders in the county’s southeast cities, and sponsoring local cultural programming through microgrants. River LA’s efforts have so impressed the county government that the organization has been contracted to write Los Angeles County’s new River Master Plan, not updated since 1996.

Though the LA River Index is an impressive and well-organized collection of data, physical restoration of the river is still in the early stages. Projects currently underway include a bridge at Griffith Park and the transformation of cul-de-sacs facing the river into microparks. However, if the river can, as Brownson puts it, become a multiuse space that serves the needs of the diverse community and makes all welcome, it will be a great success indeed.

Next Steps and Lessons for San Jose

Like the LA River, the Guadalupe River was channelized to protect local communities from flooding. Both have succeeded in this mission. Now there is a growing desire to expand on the other assets a river provides, such as critical habitat for fish and birds, as well as recreational and iconic gathering spaces for residents and visitors.

With planned development in downtown San Jose, the river and parkway provide unparalleled corridor to connect downtown with other neighborhoods in a way that enhances those neighborhoods and invites all to benefit from the improvements.

That is what SPUR, the City of San Jose, the Santa Clara County Water District, the Guadalupe River Park Conservancy, and other stakeholders and community members are seeking to do: create a bold vision that builds upon the improvements made over the past two decades and elevates this space into San Jose’s great central park.

Over the coming years, SPUR will continue to watch the revitalization of the Los Angeles River and exchange learnings as both projects progress.