By Teresa Alvarado and Jaclyn Tidwell 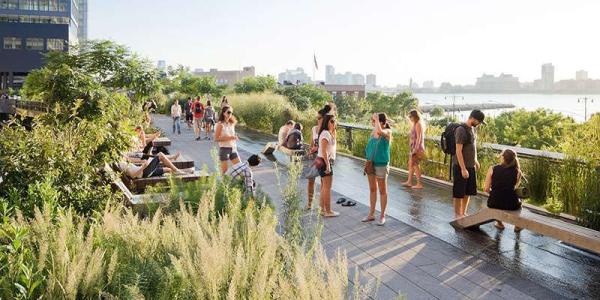 The High Line park in Manhattan. Photo courtesy Friends of the High Line.

Communities across the country are rethinking their urban infrastructure and open space to create iconic places that can spur community engagement and drive economic development. This spring, SPUR hosted Adam Ganser, vice president for planning and design with Friends of the High Line, San Jose Mayor Sam Liccardo, Danny Harris of the Knight Foundation and more than a hundred civic leaders to share the story of the High Line, New York City’s linear park built atop a disused freight rail trestle.

As the kick-off event for a new SPUR initiative to re-imagine San Jose’s Guadalupe River Park, the evening provided inspiration and guidance. Ganser shared the High Line’s history, as well as lessons learned from this national model in public space development.

Start with a wild idea and big vision.

Two passionate community members envisioned a new future for the abandoned rail trestle on New York's west side. Around the same time, the owner of the trestle, CSX Transportation, commissioned photographer Joel Sternfeld to capture the beauty of the space as nature overtook the tracks. The images were critical in building public support for the lofty idea of preserving and revitalizing the elevated tracks, which had been slated for demolition. The two neighbors formed Friends of the High Line to build a coalition of likeminded community members and then launched a design competition to envision an elevated public space in New York.

Give people something to invest in.

Lay the foundation through community input.

By creating various ways for neighbors and professionals to guide the direction of the project, the High Line maintained its roots as a community-led initiative while engaging both designers at the top of the field and New York civic leaders.

The High Line has grown into a beloved community gathering pace for locals, offering 78 public programs last year. The park has also created a new cultural hub on the west side of the city linking anchor institutions including the Shed arts center and the Whitney Museum.

Drive economic impact for the city.

Investing in public space has a high pay off, as well. Now one of the city's top travel destination, the High Line attracted 7.6 million visitors in 2016 (more than the Empire State Building and Statue of Liberty combined), a third of whom are New York City residents. The city’s investment of $120 million in capital funding has created $2 billion in new tax revenue. The project has been an economic catalyst for residential and commercial development along its corridor.

The High Line project partners are in it for the long haul. Teams from the city and Friends of the High Line have been meeting regularly for 15 years in order to build consistent rapport and partnership.

As the Guadalupe River Park project progresses, SPUR will continue to host a speaker series featuring national and international leaders in public space development. Our goal is to inform and engage the community in dialogue about how the project can create a revitalized central green space, connect downtown to surrounding neighborhoods and enhance our natural resource system.

Special thanks to The David and Lucile Packard Foundation for support of SPUR's Guadalupe River Park initiative.