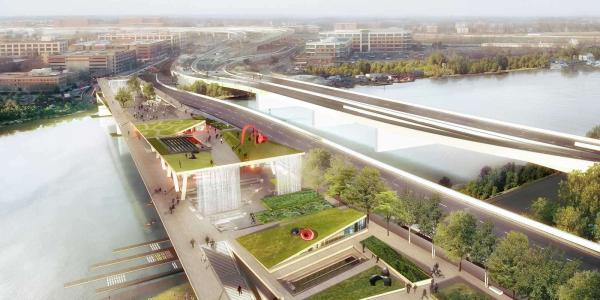 With the proposed transformation of San Jose’s downtown into a major transit, residential and employment district, the time has come to think about creating iconic and welcoming public spaces where the community can converge. That’s why SPUR has launched a major initiative to re-envision the Guadalupe River Park. Together with our partners — the Guadalupe River Park Conservancy, City of San Jose and Santa Clara Valley Water District — and the community we envision a catalyst for economic and cultural vitality, a flourishing natural habitat, and a central gathering place for residents, workers and visitors.

When cities plan new neighborhood amenities such as parks and trails, a common question emerges: Who will it serve? This means not only considering users of different ages, mobility levels and primary languages but also mitigating the unintended effects of unaffordability and displacement that can result from an improved public space. Two recent rails-to-trails projects, the Atlanta Beltline and Chicago’s 606, have contributed to such intense rises in property values, rents and displacement that they have prompted city and community leaders to propose, respectively, an inclusionary zoning overlay and a system of grants to help residents stay in their homes.

SPUR has invited leaders from around the country to share lessons learned from big, bold, civic-led infrastructure improvement efforts. We’ve heard about the wild idea behind New York City’s High Line Park and the comprehensive approach being taken to rethink the Los Angeles River. Recently Scott Kratz, director of the 11th Street Bridge Park in Washington, D.C., shared with us his experiences leading the intentional and inclusive effort to realize the community’s ambitions for the project.

A Bridge Between Two Worlds

Instead of reacting to displacement, the community leaders behind the 11th Street Bridge Park involved the community and prioritized equitable development from the project’s inception, investing in workforce development, affordable housing and small business enterprises along with infrastructure investment.

The new park, currently in the preconstruction phase, will be built on the piers of an abandoned automotive bridge across the Anacostia River. The design will be an x-shaped pedestrian-and-bicycle-only park with playgrounds, an environmental education center, and spaces for performance and exhibitions representing the art and culture of surrounding communities and creatingan iconic place where the people of D.C. will feel welcome and take pride.

Like the Guadalupe River Park and many other urban green spaces, the 11th Street Bridge Park is publicly owned but managed by a private nonprofit, Building Bridges Across the River (BBAR).

The project is about more than rebuilding a bridge; it’s about bridging two neighborhoods on either side of the Anacostia River starkly divided by race and class.

In the Capitol Hill and Navy Yards neighborhoods north of the river, most residents are white, poverty is low and the average home value is around $700,000. Conversely, residents of the Anacostia neighborhood on the southern side of the future park are overwhelmingly African-American, one-third of families are living in poverty and the average home value is only $270,000.

The challenge facing park planners was to create a place that all could enjoy and benefit from once the project was complete. BBAR began by identifying census tracts within one mile of the future bridge and found that the major challenges facing residents in the project’s impact area were poverty, lack of opportunity and unaffordable housing. Meanwhile, concern was growing that the completed park could bring gentrification to Anacostia, causing displacement.

To address these issues, BBAR and the District of Columbia would have to come up with a new model for building infrastructure. In close cooperation with local stakeholders and the District of Columbia government, they produced an equitable development plan that would drive investment in the community to ensure that the 11th Street Bridge Park can serve as a catalyst of growth without displacement. Twenty-seven strategies were identified in the areas ofworkforce development, small business enterprises and housing.

In order to address the high levels of unemployment in Anacostia, the plan includes a community workforce agreement. This agreement ensures that a majority of workers on the project are district residents and targets employee recruitment in the park’s immediate area, including those who may be difficult to employ because of conviction history. The workforce agreement also ensures a livable wage for workers and career training after the park construction is complete.

To ensure that small businesses nearby will benefit from the success of this new signature civic space, BBAR committed to providing space to local businesses and entrepreneurs both on the 11th Street Bridge itself and in the surrounding neighborhoods. Many properties surrounding the Anacostia side of the bridge are vacant or slated for redevelopment. BBAR aims to boost activity on the street and provide opportunities for community members to pursue business ideas by ensuring that local businesses are given priority in renting ground floor retail space. BBAR will contract with local businesses for service and maintenance of the park and, once its completed, include food trucks and other pop-up retail in on-site kiosks earmarked for local restaurants and merchants.

To keep Anacostia residents in their homes and enable them to benefit from the neighborhood’s development, the 11th Street Bridge Park is partnering with the District of Columbia and with established housing advocacy organizations to prevent displacement. These efforts include education and outreach on existing programs to aid low-income first-time homebuyers, as well as advocacy at the district level to increase the supply of affordable housing. BBAR is also working with nonprofit housing developers to create a community land trust that would provide affordable homes both for purchase and rent.

By expanding beyond traditional planning and thinking holistically about community benefit, BBAR is ensuring that the community’s voice is shaping the improvements and that nearby neighborhoods will continually benefit from the new park. This is reflected in the budget for the project: Investments in infrastructure (design and construction are budgeted at $74 million) will be nearly matched by investment in the local community (budgeted at $57 million).

Large-scale public space revitalization projects can transform a blighted or underutilized community asset, like a bridge, train track or river parkway. Yet completed projects around the country show that infrastructure improvements can also increase displacement pressures.

Any plans for the revitalization of the Guadalupe River Park must reflect the community’s priorities and ensure that all members of the community feel welcome and included in the benefits of such improvements. While the socioeconomic differences between downtown San Jose and neighborhoods to the east are not as stark as the divide across the Anacostia, the impacts on the largely industrial and single-family-home neighborhoods will, nevertheless, be significant.