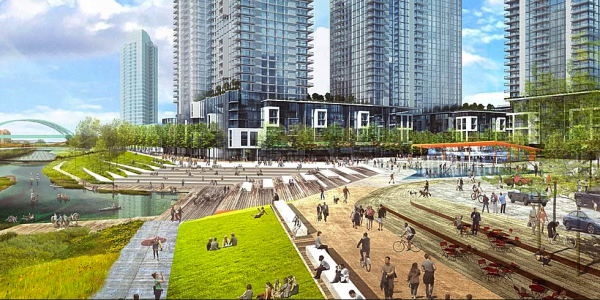 A rendering of the proposed Denver River Mile, a plan for revitalizing downtown neighborhoods along the South Platte River. Image courtesy Revesco Properties.

Major plans for new jobs, housing, BART and high-speed rail connections will reshape San Jose’s urban core. Amid this planned growth, the city has an even greater opportunity to capitalize on one of its most treasured resources, the Guadalupe River Park. The river and its waterfront have the potential to become an urban central green space that can connect people throughout the city, enhance the natural resource system and serve as an economic engine for the community at large.

As more and more people move to economically strong, culturally rich urban areas that prioritize walking, transit and biking, many cities are looking inward to identify existing assets that have the potential to attract residents and visitors. Many are deciding to focus on public green spaces.

As part of our effort to help the city reimagine on one of its greatest natural resources, SPUR has been researching similar projects and best practices from around the country.

The Denver River Mile offers some lessons for our work in San Jose. Like the Guadalupe, the South Platte River is adjacent to downtown, a former industrial zone, and to the city’s main transit center, Denver Union Station. Denver, too, has seen remarkable growth and transformation within its downtown, both in housing and commercial uses. However, the river and its surrounding land have been undervalued and have remained inaccessible to many parts of downtown and the surrounding neighborhoods. As the city continues to grow, and the boundaries of downtown expand, the nearby Auraria District is seen as the next opportunity area for significant development. The neighborhood predates the city’s establishment and is close to many existing amenities. Plans are to incorporate the South Platte River as a focal point for the future of this neighborhood.

Natural Recreation as an Economic Driver

The current area around the South Platte was formerly industrial and rail yards until a first wave of (parking centric) redevelopment took place in the 1980s and ’90s. Similar to Guadalupe River, there are many public attractions in the surrounding River Mile area, such as Elitch Gardens amusement park, the Pepsi Center (home arena of Denver’s NBA and NHL franchises), the Children’s Museum of Denver and the Downtown Aquarium. The proposed Denver River Mile plan seeks to capitalize on these existing assets by adding housing and additional commercial space, including 15,000 new housing units, public plazas, retail and office space.

While many communities build away from the water out of concern over flood risk, Denver saw the river as an opportunity for significant economic growth. In 2011 the City of Denver completed its River Vision Implementation plan for the South Platte River corridor. In partnership with the Greenway Foundation and Denver Parks and Recreation, the city identified a series of projects to re-design the river and nearby greenspaces to make South Platte River the premier outdoor recreation destination and environmental resource for the city. All of the projects identified focused on four main issues: water quality, flood control, recreation and environmental impacts. A major project within the plan was Confluence Park, completed in 2017, which allowed for improved bike paths, new pedestrian walkways and improving an existing whitewater rafting course, now a popular feature for sports enthusiasts.

With the momentum rising and projects nearing completion, the city saw further opportunity to capitalize on the underused parcels of land that surrounded the river within the Auraria District. In 2018 the City of Denver amended its Downtown Area Plan, which sought to augment the existing land uses and civic assets surrounding the river. The vision includes updating the zoning to allow for a greater mix of uses for an active and livable neighborhood, including entertainment, public spaces and a variety of housing types. Additionally, the plan encourages clustering complementary commercial uses, such as sports-related businesses adjacent to the Pepsi Center and family-oriented businesses adjacent to the children’s museum and the aquarium.

Similarly, downtown San Jose has the Guadalupe River, the SAP arena, the Tech Museum of Innovation and the Children’s Discovery Museum in close proximity, attracting residents and visitors from all over the region. Future growth should take advantage of these existing attractions to create better connectivity and synergy.

Riverfront revitalization offers an opportunity to consider new development models. Revesco Properties, the real estate investment firm behind the Denver River Mile proposal, estimates that the entire project could cost $665 million in infrastructure. Revesco is working with the City of Denver on various methods for financing this project, such as a special tax district that would incentivize investment within the district and generate funding for it.

As new development makes cities denser, it’s important to consider how to best connect public assets with one another. Creating a connected, walkable street grid is a central focus in Denver, especially given that the River Mile’s proposed developments are close to public transit.

Since Denver Union Station reopened in 2014, it has become a focal point in a neighborhood that is thriving. The station is now a place people want to spend time, whether or not they’re boarding a train. The reimagined historic station building acts as a centerpiece for an area that was once considered a dead zone of surface parking lots outside of the downtown core (a 15-minute walk away). Now, the station area is lined with great outdoor plazas and businesses that have shaped and showcased Denver’s food culture.

The plazas and public spaces developed as part of the station plan flow naturally into three riverfront parks and the Denver Millennium Bridge. Public and private investments have created walkable connections and a rich urban fabric.

The Guadalupe River sits next to Diridon Station, the hub of public transit for San Jose. As the expansion of BART and high-speed rail make their way to Diridon and the station area is redeveloped with office space and housing, it’s important to think of all the connections that can be made between the area’s attractions, with the Guadalupe River acting as the focal point.

From Denver to Memphis, Columbusto Los Angeles, cities are beginning to rethink their riverfronts and provide examples of how investing in these natural resources can improve communities. In San Jose, we have an opportunity to create a more complete downtown with jobs, housing, transit and public space that provides a place for people to convene, celebrate, protest, learn, exercise, commute and appreciate art and nature. The Guadalupe River Park project allows us to create amazing public space as part of the city’s downtown transformation efforts. As we do, the Denver River Mile plan will continue to be a point of learning and inspiration.