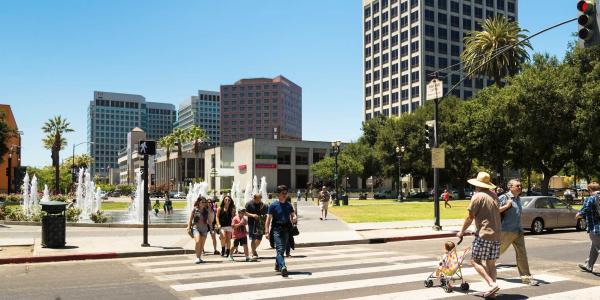 Modernizing the business tax would help San Jose recover from fiscal strain and reinvest in amenities to attract residents, businesses, employees and visitors. Photo by Sergio Ruiz for SPUR

Earlier this year, SPUR published Back in the Black: A Fiscal Strategy for San Jose. One of the major takeaways from our research was that San Jose needs more money to pay for necessary services and infrastructure, both now and in the future. For many years, the city had to prioritize urgent matters, which meant cutting services and staff, deferring maintenance on infrastructure and postponing action on proactive policies that would support San Jose’s transition to a more urban city. Our report argued that now is the time for the city to shift toward reinvestment and offered recommendations for growing revenue, including updating and restructuring the business tax.

Measure G, the San Jose Business Tax Modernization Measure, would do just that. The City of San Jose anticipates that it would double business tax revenue from $12.7 million to $25.4 million in its first year.

SPUR strongly supports Measure G. We think this proposal is a practical way to add revenue to the city’s general fund and would help San Jose do more of the things big cities do to attract residents, businesses, employees and visitors.

What would the measure do?

Measure G would update and restructure the San Jose business tax, which has not been updated since 1986. Key modifications are listed below. (See a recent presentation at SPUR for a more detailed description of what the tax measure would do.) The proposed tax would:

The measure requires a simple majority to pass.

How does this compare to the business taxes in other big cities?

The tax rate that San Jose businesses are anticipated to pay would be much lower than what businesses in San Francisco and Oakland pay. San Francisco’s average per-business tax is $6,000; Oakland’s average is $1,077. The table below that shows the current and proposed average annual payment per business in San Jose.

SPUR thinks that Measure G is a good step towards fiscal stability for San Jose. The business tax has not been updated since 1986, and this measure strikes a pragmatic balance of increasing revenue for the city while ensuring that it can continue to grow its jobs base. Vote yes on Measure G.