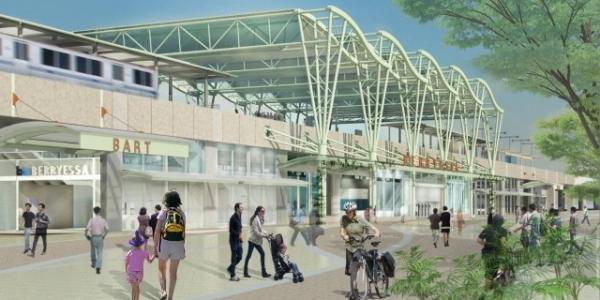 Measure B would provide funding for transportation projects across Santa Clara County, including the extension of BART from Berryessa through San Jose to Santa Clara. Rendering courtesy VTA.

Measure B, on the ballot in Santa Clara County this November, would raise the sales tax by half a cent to fund transportation projects in the South Bay. Placed on the ballot by the Santa Clara Valley Transportation Authority (VTA), the measure would generate $6 billion to $6.3 billion over 30 years. This revenue would be spent on nine projects:

A complete streets requirement would be applied to all spending categories and all projects funded with revenue from this measure. VTA is currently determining its complete streets policy. The measure would also establish an independent citizens’ oversight committee and an annual audit.

Hasn’t This Been Funded Already?

In 2000, voters approved a local transportation sales tax (Measure A) to fund the extension of BART, expand light rail and more. However, the measure did not raise as much as anticipated due to the dot-com bust. In 2004, the, Federal Transit Administration expressed concern that VTA did not have enough resources to operate and maintain BART, in addition to its light rail and bus services. In 2008, voters approved another local transportation sales tax to raise revenue that would be dedicated to operations and maintenance. Due to the Great Recession, this measure also did not raise as much as anticipated.

SPUR’s Agenda for Change calls for the Bay Area to increase rail service in its urban core, reduce local and regional greenhouse gas emission and invest in infrastructure. Our land use policies — focusing housing growth in existing communities and adding new jobs in transit-accessible employment centers — require improvements to the regional transit system.

The Measure B sales tax would generate much-needed revenue to complete BART Silicon Valley Phase II, and it would make the project more competitive for federal and state funding. It would also provide a more stable source of revenue for Caltrain operations and capacity improvements, and it would support investments in walking, biking and transit. All of these things are necessary to support sustainable growth in the South Bay and the region as a whole. SPUR recommends a “yes” vote on Measure B.