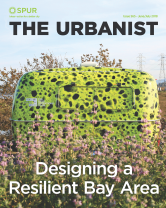 The year-long Resilient by Design Bay Area Challenge brought together local residents, public officials, designers and engineers to develop innovative proposals that can strengthen the Bay Area’s resilience to sea level rise, severe storms, earthquakes and flooding. The nine final design concepts are meant to inspire, catalyze action and push us all along the path to a more resilient future.

SPUR's Double Up Food Bucks makes fruits and vegetables more affordable for low-income families while increasing revenue for both grocers and California farmers. After its first year in operation, survey results show that families are buying and eating more fruits and vegetables — and stretching their food budgets further — thanks to the program.
By Eli Zigas and Diego Ortiz

An architect adapts her work in Oakland to focus not just on plans but people.

Savlan Hauser’s first interest in cities was an economic one. She grew up in Redding, California, and though, as she explains, it’s “a beautiful spot,” it has, like many American cities, seen its main street decimated by the onslaught of big-box stores at the fringes of town.

Yet another group scrambling for space in the Bay Area? Nonprofits.

As real estate prices continue to climb throughout the region, many nonprofits are feeling the pinch and confronting potential displacement from the communities they serve. One mitigation to this challenge — and one that strengthens organizations — is the nonprofit center, a model for shared facilities that look to achieve affordable, stable occupancy for the organizations they serve.
By Saul Ettlin