From STEM to Startup, working to make tech more inclusive. 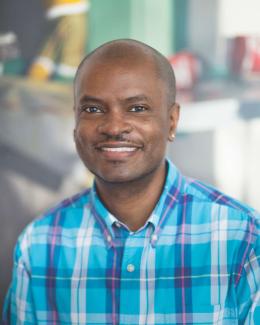 Cedric Brown first got interested in cities as a young boy, when his grandmother took him along while she ran errands or shopped in downtown Winston- Salem, North Carolina, where he was born and raised. “I didn’t have the words for it then,” recalls Brown, “but I loved the density of buildings, the pedestrian activity, the public art and the civic energy in general.”

“I still love those things about cities,” continues Brown. “In the eighth grade I wanted to be a city planner. In ninth grade I won an honorable mention in a community space design competition. As the youngest entrant, my design was printed in the local newspaper!” Today, he has merged many of these interests in his role as chief of community engagement for the Kapor Center, an organization working to demystify the tech sector by removing barriers to entry.

Tell us about your work with the Kapor Center.

I’ve had the privilege and opportunity to work in different leadership capacities with Freada and Mitch Kapor for 16 years. Coming aboard with an education and foundation background, I was the first director of an undergraduate scholarship program that Freada co-founded. Later, the Kapors and I shaped the program areas for their family foundation, which I ran for six years. Our work then morphed into the Kapor Center’s current deep focus on tech inclusion.

You’ve been working to close the racial gap in tech. Tell us a bit about some of your initiatives.

While we’re fortunate to not have the challenges of being physically endangered like many frontline activists working for racial justice, this is still tough work, especially since the racial (and other intersectional) gaps in tech are the direct result of our country’s racial hegemony and embracing of profit-over-people capitalism.

I like to say that we work “from STEM to startup” to address and mitigate the gaps and barriers along the leaky tech pipeline. It’s one that taps into pools of talent but loses it along the way. We focus on building the next generation of diverse STEM talent; on strengthening an inclusive and positive tech ecosystem in our home city of Oakland; on revealing — through scholarly research — ways to develop and retain tech talent, on building a stronger field of practice around tech diversity and inclusion; and on investing in social impact-oriented startups. We host events and trainings, do sponsorships, release reports, work in active partnerships, incubate, advise, innovate, sometimes provoke, and generally try to push issues forward. There’s always something going on at the Kapor Center!

SPUR and the Kapor Center have been collaborating on a number of programs in recent years on topics ranging from affordability to artificial intelligence. How did you first connect with SPUR?

I first learned of SPUR when I started working at the San Francisco Foundation in the 90s, and have been an admirer ever since. I’m happy that we’ve collaborated over the past two years with Oakland SPUR and the amazing Robert Ogilvie [SPUR’s Oakland director]. I learn something from him every time we talk!

And we always ask: What’s your favorite city?

Winston-Salem will always have a piece of my heart. Also Oakland, Durham, Chicago, Salvador, Brazil, and the mighty London.

Toni Morrison’s Jazz is a fantastic rendering of early 20th-century Harlem, and the recent recasting of Spike Lee’s She’s Gotta Have It contains beautiful tributes to Fort Greene and Brooklyn.

The view of Lake Merritt and Lakeshore Avenue from my apartment. It speaks to me every day.