Urban Field Notes: The Map with a Million Authors

Exploring the collective cartographies of OpenStreetMap

OpenStreetMap (OSM) is made up of millions of contributors from across the globe who are working together to create an open source map of the world. Often called “the Wikipedia of maps”, OSM functions like other crowdsourced initiatives; some contributors add pieces of map data — a road or park here, a restaurant or a bus stop there — and other volunteers modify, refine and continually improve that data. The result is a map that reflects the world with surprising accuracy. Superficially, OpenStreetMap resembles the more familiar Google Maps, but under the hood, the differences are significant: OSM is built and maintained solely by passionate volunteers, and the underlying map data is free to download and use for almost any purpose.

The map of the Bay Area shown at right, created at Stamen Design, uses historical OSM data to visualize the growth and evolution of the map over time. We began from a simple premise: draw every version of every linear feature present in the OSM historical database. The map displays all features, even deleted ones, drawing every line with the same extremely pale blue stroke. Areas with many linear features, or where multiple versions of a single feature exist, accumulate to produce darker marks.

The result is a map that is strangely familiar and readable. Freeways appear more prominent than city streets, which are in turn darker and more visible than alleyways. However this hierarchy is not derived from any attributes associated with those features. Rather, a natural hierarchy emerges as OSM contributors change and refine the map over time.

In a sense this map is a kind of x-ray, exposing dense areas of activity over space and time. In some areas you can see ghostly initial sketches gradually coalesce into thicker, sharper lines as the OSM volunteers settle around a consensus. These digital traces offer a glimpse into the inner workings of a worldwide collaboration of more than a million individuals.

Most professional mapmakers strive to create polished maps that hide the traces of their work. In contrast, OSM is as much about process as it is about the end product. The focus is on mapping, not the map itself. Revealing mistakes and refinements, OSM lays bare the effort that goes into building and maintaining a map of the world.

Despite the democratic potential and aspirations of OpenStreetMap, it has a long way to go. It is growing but unfinished, marked by uneven levels of activity and completeness. Every bus stop and even every tree has been mapped along some of London’s major boulevards, while in Africa entire neighborhoods are blank spots in the database. Even in the map shown here, places like Palo Alto and Mountain View are darker, denser, and more richly annotated than Hayward and Fremont across the bay. While the size of the OSM community continues to grow rapidly, the project has failed to recruit a diverse contributor base: most of its editors are white, male, and tech-savvy. These problems will have to change before OpenStreetMap can truly claim to be a map that anyone can edit.

OpenStreetMap’s fundamental open source ethos is an invitation for more people to become mapmakers themselves, and join in making the map. Get started yourself at openstreetmap.org. 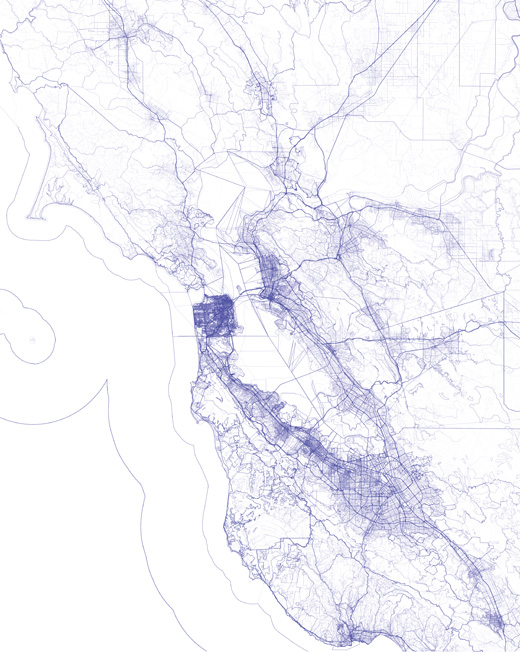 Alan McConchie is a PhD candidate in geography at the University of British Columbia and a design technologist at Stamen.