San Francisco Housing Cost Calculation Per Unit for a 100-Unit Building. This is very simplified and does not include construction financing expenses, contingencies or developer’s profit, among other things.Calculations are based on a 100 unit building assuming 800 square feet per unit, which is approximately 640 square feet of usable space based on typical building efficiency (this allows for stairs, corridors, lobbies, etc.).

The Real Costs of Building Housing

An architect shows the real costs of building in the country’s most expensive city.

Building housing at any price level in San Francisco is an expensive and challenging proposition.  Land costs are among the highest in the country; construction costs are higher (particularly on tight infill sites); and the timetable for design, permitting and construction is longer than what is typically encountered elsewhere. There is a level of uncertainty in the planning process that is unmatched in other large U.S. cities. People unfamiliar with the construction process have asked me why we can’t cap the profit developers can make in order to bring housing down to more affordable levels. The problem is that the price of building housing, not including any profit, is already more than what most of the people who live here can afford.

Let’s look at the cost of building a five-story apartment building in San Francisco. For the sake of this simplified analysis, I am assuming 100 units in a four-story wood structure over a concrete groundfloor podium level with retail and a limited amount of parking. This is the most typical type of multifamily housing being built in the Bay Area today.

I have lumped professional-services fees together with permits and city fees because professional services fees are often related to the amount of time a project spends getting entitled. Some projects spend years going through the approval process and need to be redesigned multiple times to get an entitlement. The square-foot cost comes from my own recent experience and from talking with developers and contractors.

Nearly half a million dollars for a 640-square-foot apartment (not including all the costs that would actually go into a project like this) is not even close to being affordable. The median household income in San Francisco is $74,000,[2] which qualifies that household for a $310,000 mortgage based on conventional lending guidelines.There is obviously room for profit at current selling prices, with residential units going for $1,000 per square foot or more in newly constructed buildings in San Francisco’s most desirable neighborhoods. However, this is an extremely hot market with very limited inventory. What is the effect of these high costs when the market isn’t so great? Typically, construction in San Francisco drops off to nearly zero.

In 2011, only 418 housing units were produced in the city on projects that started construction during the recession. Once the 148 units that were removed from the market are accounted for, the net addition to the market was only 270 units.[3] Between 2011 and 2012, 36,423 jobs were created in San Francisco,[4] but the lag in housing construction to meet increased demand for apartments means that several years will pass before that housing meets the market. The scarcity of new units on the market means that the buildings opening now can charge much higher rents than have been seen in existing stock. For example, NEMA — a new apartment building on Market Street across from Twitter’s headquarters — managed to pre-lease all of its Phase I units in 2013, before the building was complete, with one-bedroom unit prices starting at around $4,400 per month.

Supply and demand exists, even in San Francisco.  If you don’t believe it, look at what happened here in the early 2000s, when the last tech bubble crashed: Rental housing prices dropped by more than 40 percent when demand fell.[5] Market-rate housing being built now will be with us for a long time, and the more we can build now, the better. When the economy isn’t as good, we’ll still have that housing in the market and prices will fall.

One way we could make housing development more likely in less-than-booming market conditions is by adding more certainty to the planning process.  Neighborhood plans, like those created as part of the Planning Department’s Eastern Neighborhoods Program, go part of the way toward addressing uncertainty up front. By doing an area-wide environmental impact report (EIR), each project can avoid the environmental review portion of the planning process as long as the proposed development fits the neighborhood plan. It remains to be seen, however, if the city will stick to the neighborhood plans that have been created or if there will be political pressure to cave in to NIMBY opposition to development.

There are a variety of new technologies on the horizon, like prefabrication and cross-laminated timber mid-rise construction, that could potentially reduce construction costs. However, in the example I used above, reducing the hard costs by 25 percent (a large amount) only translates to a 13 percent reduction in the overall cost of each unit. Reducing land costs would also help. If upzoning and heightlimit adjustments occurred on transit corridors throughout the city, more land would be opened to development, which would eventually reduce costs. Parking, particularly below grade, is very expensive to build, and new city regulations that set parking maximums instead of minimums should help reduce the cost of building these spaces. Projects often run into neighborhood opposition, however, if there is a perception that a proposed building will not include enough parking.

Micro-units or newly built single-room occupancy (SRO) housing (either market-rate or affordable) could also reduce the cost of new units, even though the square-foot cost of these units is higher. Production of small efficiency units could fill a gap in the housing market for some segments of the population, but will not adequately address the long-term need for more middle-income housing. San Francisco is conducting a trial period for these units now.[6]

One of the easiest ways to get more affordable units on the market quickly with low construction costs would be through the legalization of in-law units. San Francisco Board of Supervisors President David Chiu and Supervisor Scott Wiener have been working on this issue over the past year, and a trial program is under way in the Castro. This strategy has the potential to create thousands of units of new housing that, by design, are cheaper than groundup projects built by developers, as the structures already exist. It also provides an income stream to homeowners or a way for seniors to downsize without having to leave the neighborhood. The other bonus to this type of development is that it adds units without significantly changing the physical character of the neighborhood. New regulations would not require an additional parking space for the in-law unit, which historically has been required despite being impossible on most lots in San Francisco. 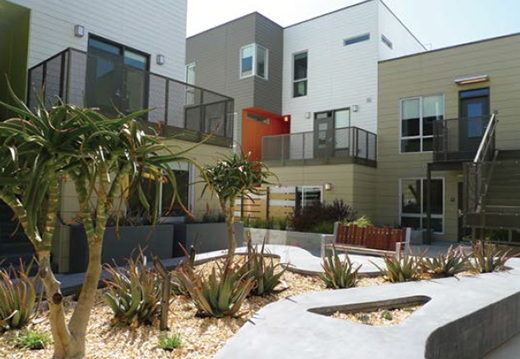 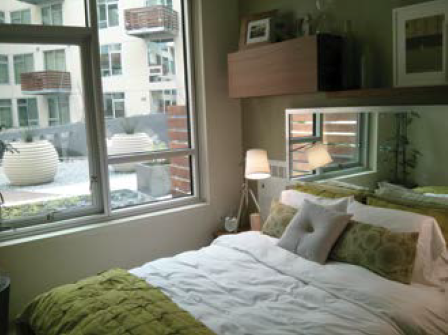 Fillmore Park (top) and Rincon Green (bottom) are two recent projects by David Baker Architects that are representative of the type of infill development we need to build a lot more of in the Bay Area.

The other side of the high cost of building housing is that it severely limits the amount of subsidized affordable housing that can be produced in the city. Inclusionary units built in new market-rate buildings are dependent on the number of units that are produced in total on the site, while ground-up affordable projects are subject to the same economics as my sample project, with a few exceptions. Removing land costs via a land dedication helps make the financing pencil out, and the City of San Francisco should do more to find cityowned parcels that can be targeted for affordable housing development. Right now, the majority of funding for subsidized affordable housing comes from in-lieu fees paid by market-rate developers, so the production of these below-market-rate units is tied to the overall housing market. In time, the city’s Affordable Housing Trust Fund (approved by voters in 2012) will be an important funding mechanism to replace what was lost when Governor Brown eliminated R edevelopment agencies, but it is not funded yet.

The numbers point to a problem that has been decades in the making and that has no easy solutions. And the problem is not limited to San Francisco. All communities in the Bay Area need to look at addressing increased demand for housing for people at all income levels. Building a few thousand high-end condos and apartments at the peak of each real estate cycle will not solve the pressing demand of housing the region’s growing population, but neither will halting construction out of the fear of change.