This UC Berkeley archivist's favorite urban artifact may surprise you. 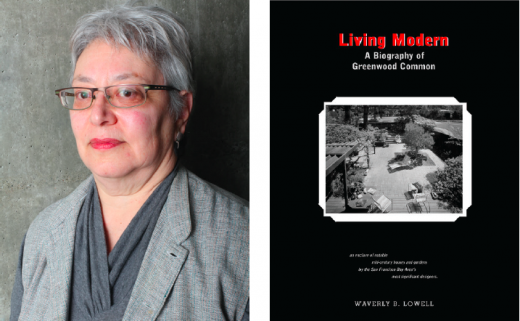 Archivist Waverly Lowell is also the author of the book Living Modern: A Biography of Greenwood Common.

Committed to raising awareness of the built and landscaped environment, the Environmental Design Archives (a research facility within University of California, Berkeley’s College of Environmental Design), collects, preserves, and provides access to the records of architects, landscape architects, and architectural photographers who had their practice in Northern California, as well as some national and international landscape architects. The archive is run by the formidable Waverly Lowell, who established it back in 1999 with a grant from the Getty Foundation. Though it boasts nearly 200 collections, “we are,” explains Lowell, “still actively collecting.” We spoke with Lowell about the state of the archive in the digital age and how we can learn as much from the projects that were never built as from the ones standing today.

The whole idea of an archive has changed dramatically in recent years. Why is the printed record still important? What is lost without it?

The idea of an archive hasn’t actually changed. There is still a need to capture/preserve and use historical materials. What has changed is the format of that material. But there is something fundamental about seeing and holding an original drawing or document. There is a life to it that electronic images or copies just don’t have. People often ask why we don’t scan everything and toss the originals, but gasp when they walk into the research room and ask where the drawings are and I tell them (with my fingers crossed behind my back) that they were scanned and tossed. We know how to preserve paper so that it will still be there in a few hundred years, but there is less certainty about our abilities to preserve digital images and electronic records.

“Unbuilt San Francisco” is currently on view at several institutions in the Bay Area (including SPUR). You curated the “Unbuilt” exhibition for UC Berkeley’s College of Environmental Design. What lessons can we learn from the never-realized visions of the last century?

Seeing the original proposals was like a secret that wanted to be shared. Otherwise how would anyone know about them? The lessons include hoping that the people selecting and reviewing designs won’t be afraid to take risks. Conversely, just because you can build in new ways with new materials doesn’t always mean you should.

As an archivist, you know where the bodies are buried. What’s the most scandalous thing you’ve encountered in the archives? What items are dearest to your heart?

I can’t really share the scandals, but infidelity ranks high. I once got a call from someone who had been adopted but whose mother was the daughter of a famous architect from the 1920s, asking if I might know which architect. Some years later we found some letters and figured it out. Dearest to my heart is the warmth of William Wurster’s correspondence with his colleagues. I’m also very fond of drawings created by William Turnbull, his hand and his style.

Always a hard question for our subjects to answer, but as someone who is passionate about the built environment, what’s your favorite city?

This is a hard one. I love the old city of Siracusa (Ortigia) in Sicily for its walkability and the way millennia of history is integrated and the food of course. I guess Rome would be at the top, too, for many of the same reasons, followed by Prague.

Knew you couldn’t pick just one! Could you share with us your favorite book/film/work of art about cities?

What comes to mind for a favorite book about a city is Oyster by Mark Kurlansky and movie — since Philadelphia Story isn’t really about Philadelphia — it might be Charade and its views of Paris. George Bellows is my favorite urban painter; I love his painting of a lone remaining New York tenement.

Looking at San Francisco from Twin Peaks is a wonderful view, and fun to do on New Year ’s Eve with your partner and a bottle of champagne. Looking at Paris from Sacre Coeur and the Roman forum from the Palatine Hill aren’t bad either.

That’s an easy one, it’s the faux rock cliffs on the way to the Cliff House.