From Pop-Up to Permanent

In Oakland, an artist and urban designer blends boosterism with positive deviance.

Urbanist Article July 4, 2013
In art school, Sarah Filley’s work focused on sculptures, video, performance and photography. “The themes I’ve explored have always been about how we live in urban cities and how the cities reflect our desires back to us,” explains the cofounder (with Alfonso Dominguez) of Popuphood, a small-business incubator aimed at revitalizing Oakland’s neighborhoods block by block. “My first performance was at a Healthy Cities conference in downtown Oakland!”

When Filley graduated, she continued to find creative ways to engage the public around citizen agency and urban resiliency. As an artist she proposed projects that used public data, government agencies and technology to connect residents to resources, but as she explains, “It was frustrating to be trained in creative problem solving yet marginalized as a cultural producer and have no real impact on how cities serve, engage or even celebrate its population.”
So Filley launched Popuphood, an initiative that focuses on connecting micro-entrepreneurs to a shared creative engagement for macro-collective impact. “Our company arose out of a deep love of place,” she says. “Having so many artists, makers and designer networks here makes this an amazing city. Creating a platform to showcase the amount of cultural production with our ‘Pop-Up to Permanent’ program is how we can both share what has been happening here and have a positive economic impact on the community.“ 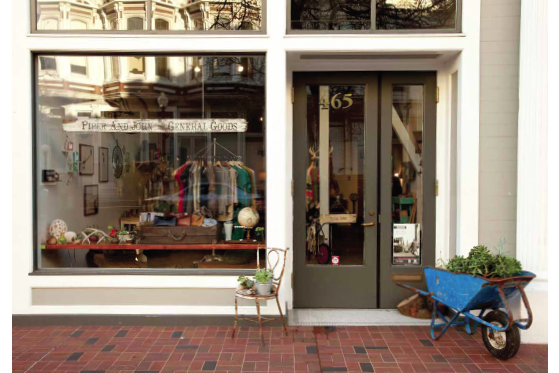 One of Popuphood's downtown retailers.

What interests you about cities? And how did you first learn about SPUR?

I wanted to be part of a global conversation on the direction of cities and understand how I could have a real voice in designing a city that reflected my needs as a creative person but also as someone hit hard by the economic downturn. I saw what was happening in the arts and how institutional funding was drying up.
I knew that it was only a matter of time before it hit cities as well. As an artist I didn’t feel connected to a purpose, [but now], as a social entrepreneur, I feel connected to a global conversation of likeminded folks and now boosterism is my full-time job!

I learned about SPUR when I started loitering in San Francisco to find a community of hackers, instigators, urbanists, digital artists and people talking about urban innovation. There are people doing and talking in Oakland, of course, but they lacked the connective social tissue of a physical place to gravitate to. SPUR really was one of my first touchstones to find my tribe, so to speak, and migrate over from the art museums and galleries into the urban exhibits and publications found at SPUR.

What projects are currently in the works for Popuphood?

The importance of sharing successful strategies between cities will be the next level in the urban prototyping movement and sharing economy. We are programming our new office space in Frank Ogawa Plaza, which faces Oakland’s City Hall, and we’re collaborating with many of the great people we have met while speaking and consulting in different cities. We’ve partnered, for example, with the California College of Arts’ Engage program to complement our work on a district level with KONO (Koreatown Northgate Community Benefits District).
Our first Pop-up in this downtown location is Hub Oakland. We will expand our Pop-up Plaza incubation in the fall to include more businesses. The talent of our applicants is matched only by the excitement in Oakland right now. It feels amazing to see this city hit its stride.

Awesome. Now tell us about your favorite…

Urban view: The view of downtown Oakland from the Tribune Tower cannot be beat. It has a 360-degree view and is a great example of the status afforded this early landmark.
City: Melbourne. It is to Sydney what Oakland is to San Francisco. It has a feisty underdog spirit that suited me well and made it very familiar.
Book on the city: Triumph of the City [by Edward Glaeser], hands down. Coming from an art background I really appreciate an argument that has its roots in history and looks at the economics of the future. We have a moment here to ground progressive citizen led initiatives in equitable and inclusive policy and I appreciate the philosophical bent to the reasoning found in its pages.
Adapt, Transform, Reuse
Urban Field Notes: The Hills of San Francisco
From Pop-Up to Permanent
See All Urbanist Articles