Can we provide public goods more efficiently by pricing them to reflect real-time demand?

Have you ever looked up the fare for a roundtrip flight only to find two days later that the price has gone up $200? Or perhaps you’ve had better luck finding rock-bottom, seemingly half-price deals to travel somewhere at the last minute? Why do different seats on the same plane, all purchased at different times, vary so widely in price? It’s because airlines employ a tool called dynamic pricing — a system that adjusts prices based on expected demand in order to increase profit in light of fixed capacity and the elasticity (or flexibility) of consumers’ individual demands. This enables the airlines to yield as much revenue as possible for each fixed cost (or flight), sometimes resulting in substantial consumer savings, other times not.

The price of public goods provided by either government or a regulated monopoly — think transit rides, drinking water, park admission — typically aren’t based on supply and demand, because there is no real “market” for such goods. Prices may be based on the cost to supply the goods or the cost that regulators believe will meet public expectations of fairness, or some combination of the two. Sometimes there is no price at all because it has not been possible — either physically or politically — to charge for resources based on use.

But it is becoming possible for the public sector to employ dynamic pricing — as airlines do — to manage certain limited public resources. Sometimes called demand-based pricing or real-time pricing, this is a more efficient way of allocating publicly provided or regulated goods, especially those that are subject to wide fluctuations in demand over a short period of time, such as within an hour or a day. By judging people’s willingness to pay for a publicly provided service — such as electricity, road space or parking — demand-based pricing enables a more nimble match-up of supply and demand than has previously been possible.

The innovations that fuel smart cities make these pricing schemes possible. A combination of new sensory and computing technologies, two-way communications and devices that both create and analyze large volumes of data can now measure and communicate real-time demand. This information can be used to automate price signals for resources, such as at smart parking meters. In some cases, it can also be used to remotely trigger a certain action, such as powering down preselected devices during periods of peak electricity demand.

1. Economic efficiency (as explained above)
2. The creation or growth of a revenue stream that could be used to recoup the cost of building infrastructure or to maintain levels of service for supporting it
3. The avoided cost and environmental impact of building new infrastructure to accommodate peak demand
SPUR believes that effective use of pricing is an appropriate way to manage limited resources like parking, highways and electricity. In our report The Urban Future of Work published in January of this year, we recommended instituting full-road pricing on key regional highway corridors as an initial step toward broader pricing of all major highways in the Bay Area.
Dynamic, demand-based pricing has potential environmental and economic benefits. Because it is a more efficient mechanism for allocating public goods, it can help reduce waste or loss that is otherwise paid for by taxpayers or ratepayers. A new revenue stream generated by road pricing, whether congestion pricing or a peak-period bridge toll, for example, can be directed toward road maintenance or transit operations, which are often underfunded. By reducing peak demand, demand-based pricing for electricity could save ratepayers the cost of purchasing reserve power production, allowing those funds to be invested in energy efficiency or even returned to customers through future electricity price decreases.
The environment benefits because operating or building new infrastructure just to satisfy peak periods of demand can be avoided, and peak demand for the resource itself can be reduced. By pricing peak demand for traffic lanes at a rate that encourages some travelers to drive at other times of day to do so, for example, we can avoid building a new lane (a costly enterprise that will increase emissions in the long term) and reduce traffic congestion in the short term resulting in free-flowing lanes of travel and fewer emissions).
Of course, there is a tradeoff here: Peak-period pricing may be regressive, because higher prices will have a bigger impact among people with lower incomes. Any demand-based pricing scheme for public goods must be designed to mitigate disproportionate impacts as much as possible, especially with goods that were previously “free.” SPUR believes that one way to mitigate equity concerns around new pricing plans would be to provide a certain quantity of things such as free trips and reduced rates, to lower-income people. 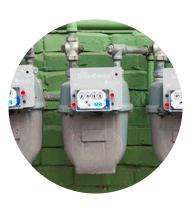 Demand-based pricing of electricity can save ratepayers and electric utilities both capital and operating costs. Capital costs may be saved by avoiding (or at least postponing) the construction of new facilities that will be infrequently used except in extreme peak demand circumstances (i.e., 3 p.m. on the hottest day of the summer). Utilities can save operating costs if they don’t need to have a large operational reserve or spare capacity online to deal with unanticipated or sudden changes in demand. Instead, existing facilities will operate more frequently. The cost savings from efficient pricing may be significant. Between 10 and 20 percent of electricity costs in the United States are due to peak demand during only 80 to 100 hours of the year. [1]
The key new technologies that enable demandbased pricing for electricity are smart meters and smart grids. Together, they form an energy network that is more efficient and can better utilize decentralized and small-scale renewable energy sources such as solar and wind. Because it monitors real-time demand, a smart grid could enable significant expansion of demand-response programs — which currently enroll mainly volunteers and large business customers — into the residential market. For participants, demand-response programs provide an incentive to temporarily reduce electricity demand on peak days. But they also create permanent energy savings by reducing demand in off-peak periods by an average of 4 percent. Smart meters allow users to monitor real-time energy consumption and to take advantage of variable-rate pricing plans where they are available. Between consumers, utilities and the environment, everyone stands to gain from improved efficiency in pricing and the expansion of demandresponse programs. 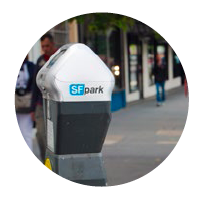 Though parking costs vary by location, hourly or daily rates tend to be predictable and fixed. But there are inefficiencies and socioeconomic impacts if providers get the price of parking “wrong.” While overpricing parking could lead, for example, to shoppers or tourists taking their business elsewhere, underpricing leads to excess driving, which causes congestion and unnecessary emissions (the perception of limited parking could also lead shoppers or tourists to choose a different destination). Now, new smart parking meters can use demand-based pricing to set the price of parking right at the equilibrium of supply and demand. A theory of transportation economics holds that the optimal occupancy rate of publicly provided parking is 85 percent — where little or no circling is necessary to find a spot. New technologies that can monitor occupancy and gauge demand block by block can help set rates to achieve this goal.
San Francisco was one of the first cities in the country to test this model with its SFpark program, which began in 2010. SFpark meters have been installed in a few pilot districts: Fillmore, Downtown, Fisherman’s Wharf and more. Rates vary by time of day, day of the week, block by block and over time (monthly) to respond to demand. Parking sensors installed in each parking space detect occupancy rates, and program managers review utilization data every month, at which time they may move hourly maximum rates up or down by 25 to 50 cents. Two-way communications by these sensors make it possible for drivers to look up real-time availability using a smartphone app.
Besides the benefits of more readily available parking in SFpark districts and reduced congestion and emissions, the program may help improve the speed and reliability of transit vehicles, which may spend less time blocked by traffic or double-parked vehicles. 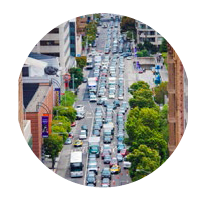 Demand-based pricing for roads can make travel more efficient within a congested zone (like a downtown area), at a congestion choke point (like a bridge) or throughout a region by using a network of high-occupancy toll (HOT) lanes.
As with smart parking policies, better utilization of road space through demand-responsive pricing could reduce congestion, especially during peak demand periods, improve the speed and reliability of transit vehicles and enhance the attractiveness of other modes of travel such as transit and biking.
Road pricing is a common practice, especially on the East Coast of the United States, but the strategy of rapidly changing toll prices to reflect real-time traffic conditions is newer. London, Stockholm and Singapore are models of city center cordon, or congestion pricing; the idea is being studied for San Francisco.
The Metropolitan Transportation Commission is transitioning many of the Bay Area’s high-occupancy vehicle (HOV) lanes into HOT lanes, which are expected to better utilize existing capacity and reduce idling and emissions. An additional public benefit is a new revenue source that can be used to pay for road maintenance or transit.
SPUR believes that full-road pricing is better than establishing single HOT lanes; a single-tolllane approach could result in more driving, not less (by creating less congestion in the unpriced lanes). Real-time congestion pricing may be more difficult to implement than smart parking policies, time-ofuse energy pricing or demand-response programs. This is because people are generally accustomed to paying for parking and electricity already, but not for driving on freeways. Also, there are real-time benefits for participants in these other programs: being able to find a parking spot (and in SFpark, to pay with a credit card) or saving money by turning off nonessential appliances. Some of the equity impacts of this type of plan may be mitigated by reinvesting revenue from full-road tolling into public transportation services.

Cities now have the tools and technologies to better utilize key pieces of urban infrastructure by getting the price much closer to the real equilibrium price than ever before. By doing so, we gain a host of co-benefits, including quality-of-life improvements such as less traffic and environmental benefits such as fewer emissions. Smart cities of the future will invest in these opportunities as a boon to their own residents and businesses, and to society at large.
--
[1] Demand Response and Smart Grid Coalition, April 2011, www.drsgcoalition.org/policy/DRSG_Comments_on_CES.pdf
Photos by Sergio Ruiz

A Policy Agenda for the Sharing Economy
Smart Cities, Limited Resources
Why Does Civic Data Matter?
See All Urbanist Articles