The Benefits of Big

On a recent visit to Los Angeles, SPUR discovers the benefits — and challenges — of living in a county that encompasses over 4,000 square miles.

Los Angeles differs from the Bay Area in many ways, but one of the biggest differences is its sheer physical size. The City of Los Angeles is enormous, covering 469 square miles and housing 3.8 million people. Compare to San Francisco, at 47 square miles, Oakland at 56 and San Jose at 177, with populations of roughly 800,000, 400,000 and 950,000, respectively. To put it another way, San Francisco, Oakland and San Jose — the three “central cities” of the Bay Area — could all fit inside Los Angeles’ city limits with nearly 190 square miles to spare.

The County of Los Angeles is larger still. It encompasses more than 4,000 square miles and includes some of the cities that we think of when we think of L.A.: West Hollywood, Beverly Hills, Long Beach, Pasadena and Santa Monica. It is the most populous county in the entire nation, home to roughly 9.8 million people. And the broader Los Angeles region as defined by the Southern California Association of Governments (SCAG) includes Imperial, Orange, Riverside, San Bernadino and Ventura counties in addition to Los Angeles County itself, covering more than 38,000 square miles and roughly 18 million people. Compare this to the ninecounty Bay Area, which covers 6,900 square miles and includes 7.1 million people. Los Angeles — the city, the county, the region — is simply enormous.
So what does this mean for Los Angeles as an urban place? What did SPUR learn about Los Angeles on our study trip while traversing the landscape by subway, bus and foot? For one thing, it is nearly impossible to talk about just one Los Angeles. The city is made up of a seemingly endless series of unique neighborhoods — Little Tokyo, Koreatown, Venice, Boyle Heights, Hollywood, Echo Park, Silver Lake, Los Feliz — each with its own distinct culture, ethnic groups and physical form. Some neighborhoods are undergoing rapid densification around transit nodes in ways that are unique to the culture of the neighborhood itself (such as Koreatown, where a combination of Asian capital, an affinity for highrise construction and public artworks such as April Greiman’s “Big Bowl of Rice Finished, Waiting for Giant Soy Sauce Packet” combine to create a very distinctive neighborhood). Other places are seeking to attract new residents to glorious old buildings that had suffered from years of neglect (like the newly revitalized downtown). Some places are oddly familiar: Silver Lake feels like the Los Angeles version of San Francisco’s Valencia Street corridor, with block after block of cafes and artisanal ice cream shops. Others are a world unto themselves, like Venice Beach, a place perhaps best experienced on roller skates.The sheer scale of Los Angeles has numerous benefits — and no shortage of problems.
Click to enlarge >> 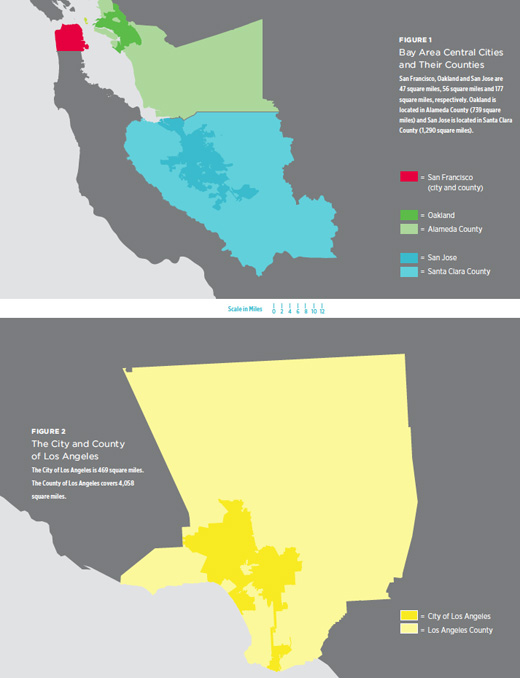 Our visit revealed that one of the best things about the size of Los Angeles is that it allows for experimentation. In a compact city like San Francisco every new development, pocket park or street design can be the site of a painful, protracted battle. In Los Angeles, however, there is so much going on all the time and in so many places that there seems to be more of an openness to try new things. Accordingly, its culture of architecture and design has lo
ng been one of the most dynamic in the nation. In Culver City, for example, an abandoned industrial park has been transformed into new studios and offices. Designed by architect Eric Owen Moss (who also heads up SCIArc, L.A.’s most avant-garde architecture school), this new collection of architecturally radical buildings is known as the Hayden Tract. One would be hardpressed to think of an area in San Francisco (though easier to imagine one in San Jose or Oakland) that might allow for such a transformation.

How do San Francisco, Oakland and San Jose compare with the City of Los Angeles?

How will San Francisco, Oakland, San Jose and Los Angeles Grow Over the next 25 years?

In absolute numbers, the City of Los Angeles is projected to grow by over 500,000 people, more than any Bay Area city. However, San Francisco, Oakland and San Jose will grow more as a percentage relative to their current population.

How does the Bay Area Region Compare with the Los Angeles Region?

The area covered by the Southern California Association of Governments (SCAG) is enormous, covering Imperial, Orange, Riverside, San Bernadino and Ventura counties, in addition to the County of Los Angeles. This suggests that better comparison to the Bay Area region may be Los Angeles County, which is roughly 60 percent of the size of the entire nine county Bay Area covered by the Association of Bay Area Governments (ABAG).

The area covered by the Southern California Association of Governments (SCAG) is enormous, covering Imperial, Orange, Riverside, San Bernadino and Ventura counties, in addition to the County of Los Angeles. This suggests that better comparison to the Bay Area region may be Los Angeles County, which is roughly 60 percent of the size of the entire nine county Bay Area covered by the Association of Bay Area Governments (ABAG).

Los Angeles is also able to support many different types of economic districts. The Fashion District, to take just one example, occupies 100 blocks in close proximity to downtown. This immense and eclectic swath of the city includes thousands of stalls for manufacturing, wholesale and retail textile and apparel businesses. Nearby is the Flower District, with its six-block, 200-vendor flower market. Having the space for such dense districts that cover an entire supply chain helps support business creation and economic diversity.
We were impressed with L.A.’s incredibly diverse housing stock, including a greater (and expanding) supply of relatively affordable housing that helps support economic and cultural diversity. Housing ranges from the “mansion belt” stretching from Beverly Hills to the Pacific to new high-rises in Koreatown, from the adaptive reuse of office buildings downtown (like the Standard Hotel, which occupies the former headquarters of the Superior Oil Company) to the overwhelming number of midcentury “dingbats” (two- to threestory apartment buildings built over parking). New multifamily housing is also being constructed, some of it in very thoughtful ways. Just one example among many is 1140 Formosa, a lovely 11-unit project in West Hollywood, designed by Lorcan O’Herlihy, which combines playful modern architecture with a new pocket park.

The Fashion District, dingbats and 1140 Formosa 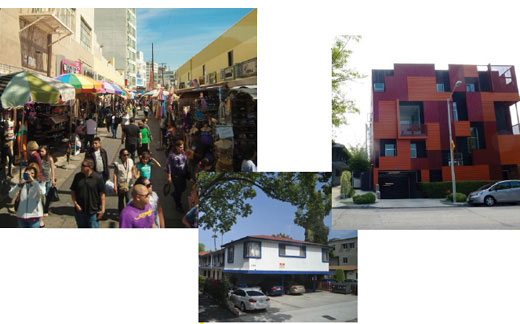 The Not So Good

The immensity of Los Angeles fosters experimentation and allows for lots of things to be happening in many places at once, but it does make it hard to have a civic dialogue about what L.A. ought to be. In San Francisco, getting to City Hall to testify on matters large and small is fairly easy to do. It is possible to keep track of most of the development politics within the city including what is being proposed for development and where. Making sense of what’s happening is possible in a 47-square-mile city such as San Francisco or a 56-square-mile city like Oakland. It’s even tenable — though harder — in a 177-square-mile city like San Jose, where development tends to be concentrated in certain areas. But in a 469-square-mile multinodal city like Los Angeles, it’s a seemingly insurmountable prospect.
This difficulty is only compounded when trying to solve collective action problems, such as controlling traffic or siting new housing or figuring out how to pay for big infrastructure upgrades. While these problems can be overcome (as shown with the passage of Measure R, which creates roughly $40 billion in new sales-tax revenue for transportation, page 10), the size of Los Angeles makes them harder to tackle.
Finally, it can be hard to get things done in a large city with a large city government with many departments, especially when the problem at hand requires interdepartmental cooperation. Not surprisingly, some of the best public-realm changes in Los Angeles County have been implemented by smaller and more nimble cities, such as Pasadena (with its lovely alleyways and trailblazing parking management policies) and West Hollywood (with its recently improved, pedestrian-friendly boulevards).

What Can the Bay Area Learn from Los Angeles?

We in the Bay Area often dwell on our challenges. It’s hard to raise money to pay for the things we need, like more parks, improved education and better transit service. We can’t get enough housing built in the right places. Some of our older cities are too precious, and some of our newer cities still need to create places that future generations will be proud of. Los Angeles shares many of these problems and of course has many of its own, most notably its preponderance of infrastructure that supports the private automobile — wide roads, big highways, lots of parking. 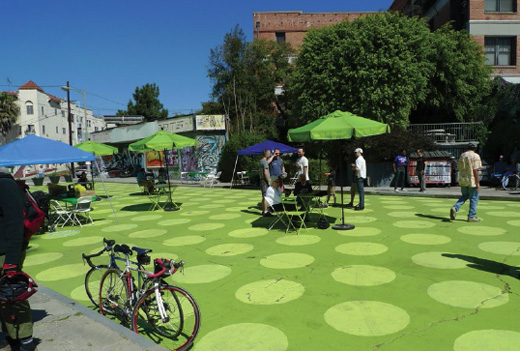 But rather than get caught up bemoaning its caroriented streets and low-density boulevards, L.A. has been proactive and has made those streets more walkable, reclaiming odd corners for pedestrians (one example being Polka Dot Plaza in Silver Lake, where a strip of Sunset Boulevard was blocked off and painted with bright green polka dots) and adding layers of density to make places more lively. It has built an impressive and well-utilized transit system and was even successful in taxing itself to make that transit system even better; funds from Measure R will build out existing lines and add new ones to create an interconnected rapid transit network.
Its sprawling landscape of boulevards and parking lots — emblematic of the 20th-century’s worst urban failings — now offers tremendous opportunities such as the embrace of radical new architecture in order to foster the types of creativity and weirdness that make cities exciting places to live. Or to find ways to reinvigorate old strip malls, reinhabit still older underutilized high-rise office buildings and reclaim the long-neglected Los Angeles River. Being big allows Los Angeles to think big. The scale of that ambition is truly inspiring — and it gives us in the Bay Area a lot to think about.
--
Sources for all charts: Association of Bay Area Governments (ABAG) projections from www.abag.gov, ABAG Sustainable Community Strategy, Draft Preferred Scenario v18c, 2010 U.S. Census and other census data found at http://www.bayareacensus.ca.gov/, Southern California Association of Governments (SCAG) projections from www.scag.ca.gov, correspondence with Javier Minjares of SCAG, July 13th, 2012.

Special thanks to Anna Gore, Chelsea Fried and Will Heywood.

The Benefits of Big
Transit, Transformed
A New Course for the L.A. River
See All Urbanist Articles