A Vision for Ocean Beach

This article is excerpted from the Oceach Beach Master Plan. Read the complete plan at spur.org/oceanbeachplan >>

San Francisco’s Ocean Beach has seen better days. Storm surges have battered the city’s western coast, resulting in severe erosion at the south end of the beach. Large boulder revetments are shoring up bluffs to protect the Great Highway and the sewer pipes underneath it, and erosion has exposed unsightly construction fill. As climate-induced sea level rise sets in, erosion at Ocean Beach will worsen. But with a strategic approach to coastal management in place for the first time, the city now has the opportunity to actually improve conditions at the beach.

This month, SPUR will release the Ocean Beach Master Plan, a landmark climate adaptation and open space plan for three and a half beloved miles of San Francisco’s Pacific coast. The plan — produced by SPUR in cooperation with a host of federal, state and local agencies; community stakeholders; and the public — charts an ambitious and proactive vision for managing a changing coastline while protecting critical sewer infrastructure and significantly upgrading public access. 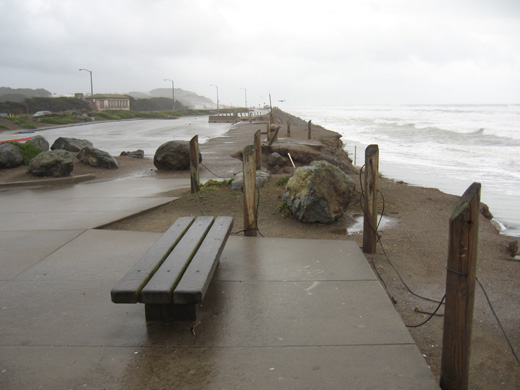 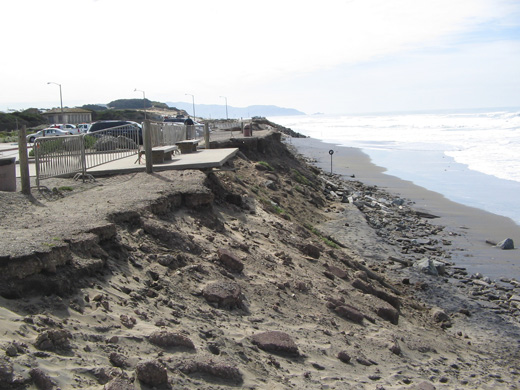 These images show the extent of damage wrought in just two years after huge storms hit the coastline in 2009.

The project team for the master plan — including specialists in design, civil and coastal engineering, transportation and environmental planning — worked with staff from the agencies involved to identify key issues and consider their future evolution. Ocean Beach faces numerous overlapping challenges, which were explored in some detail in the April 2011 issue of The Urbanist. Among the most challenging issues is the sheer number of agencies involved, all with different responsibilities, priorities and imperatives. Their roles vary in both function and location, and no one entity oversees the beach as a whole. As a result, Ocean Beach has become something of an orphan. With no proactive policy in place to address ongoing erosion, response has been ad hoc, mostly falling to the Department of Public Works to install emergency armoring in the form of boulder revetments (i.e., large piles of boulders). Critics rightly point out that goals other than coastal protection — such as coastal access, ecological function and aesthetics — are losing out and that south of Sloat Boulevard the beach remains in a dismal state.

As with so many policy challenges, prior to the master plan conversation around the future of Ocean Beach had been reduced to stark polarities: protect the status quo or allow nature to take its course. When erosion threatened to damage San Francisco’s wastewater treatment system, the city saw a serious danger to new, expensive and tightly regulated public investments that protect coastal water quality. The Department of Public Works acted quickly to armor the beach. Meanwhile, environmentalists saw these ad hoc emergency measures becoming permanent over time and wanted the infrastructure to be relocated. In fact, both views are valid. Moving beyond such black-and-white arguments has required all parties to accept the legitimacy of the others’ concerns — and the reality that there are no easy answers. We need all of the coastal management tools at our disposal to address the problems at Ocean Beach. Managed retreat, beach nourishment and coastal armoring all have a place. In the Ocean Beach Master Plan, each is deployed in a nuanced and considered fashion to solve many problems, and serve many objectives, at once.

Ocean Beach is not a wilderness in which human hands are unwelcome. Although it has a wild character, it is and will continue to be very much a managed landscape. This effort sought to articulate a plan with multiple objectives, one that views ecological and open space functions with the same urgency as protecting infrastructure. Each of these priorities has its champions among agencies as well as the public. Each entity has gotten some, but not all, of what it wanted.

It was essential to open this dialogue to people with concerns beyond the prevailing hot-button issues of erosion and coastal management. This project was, after all, charged with considering all aspects of the beach, including recreation, character, public amenities and wildlife habitat. Accordingly, the Ocean Beach Master Plan emerged from an extensive public outreach process. Building on the work of two community-led task forces, the Ocean Beach Task Force and the Ocean Beach Vision Council, SPUR actively sought out and engaged a wide range of stakeholders from public agencies, community organizations and advocacy groups.

The Ocean Beach Master Plan Recommendations address the full range of issues identified above. They are presented as a package of improvements, investments and management practices that can achieve best-case outcomes for many objectives through 2050, based on consideration and analysis to the year 2100.

Key move 1: Reroute Great Highway behind the zoo via Sloat and Skyline Boulevards

Key move 3: Reduce the width of the Great Highway to provide amenities/managed retreat

This article is excerpted from the Oceach Beach Master Plan. Read the complete plan at spur.org/oceanbeachplan >>

This project was funded by the California State Coastal Conservancy, the S.F. Public Utilities Commission and the National Park Service.