How a desire to stay warm can shape our cities, for better or worse

San Francisco’s mild climate allows for all kinds of development that would never fly in my native Minnesota — imagine trying to drive down an icy Lombard Street or shivering through a cable car ride in below-zero weather. Most Minnesotans don’t love the cold any more than you do, and the desire to keep warm has visibly shaped our cities. The most obvious manifestation of this is Minneapolis’ sprawling network of “skyways” — a name for the enclosed bridges between buildings that might sound grandiose if it weren’t for their sheer scale. Minneapolis boasts more than seven miles of aboveground tunnels, connecting more than 70 continuous blocks in enclosed passages, making it the largest such network in the world. (St. Paul and Duluth also have sizable grids.)

Minneapolis didn’t invent the skyway: Interbuilding bridges can be found in Chinese architecture dating back to the year 220 or earlier, and Venetians have been crossing their city’s canals in skyways for centuries. Minneapolis’ contribution was just to systematize the concept, even if all of its skyways are privately owned.
But just as Minneapolis has changed the skyway, the skyway has changed Minneapolis — for both the better and the worse. Predictably, diverting pedestrians up off the street has left the sidewalks eerily quiet during the day. And while some urbanists complain that these bridges prescribe a pedestrian sphere that ends at the last skyway, it’s worth noting that this safe, sunny, climate-controlled grid likely convinces more than a few would-be drivers to walk to lunch each day. It’s also extremely handicapped-accessible.
Having proven popular in Minnesota, skyways are spreading — and not just in the frozen north. Houston is home to one of the country’s secondlargest skyway networks.

Pedestrians make up the entire population in the skyways. No bikes, no cars, no waiting for traffic at the intersection. Other than this, the only major difference is that in winter skyways might be 60 degrees warmer than the sidewalk below, and in the summer they’re just as comfortably cool. 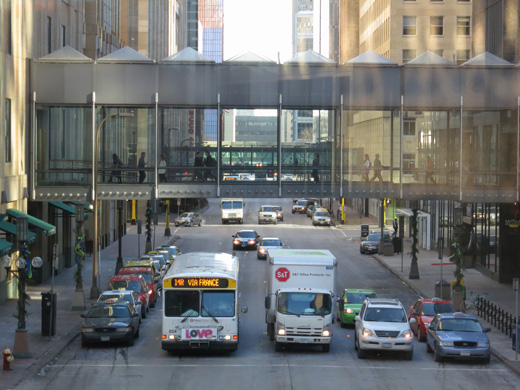 Nicollet Mall, a popular downtown shopping corridor, still sees a lot of foot traffic in the summer, but in the winter it’s practically dead as shoppers stick to the skyway. The network’s earliest designers always meant for their skyways to connect directly to the sidewalk via stairs or elevators, but this proved prohibitively expensive and never caught on. Instead, pedestrians can only enter the grid during private buildings’ business hours. 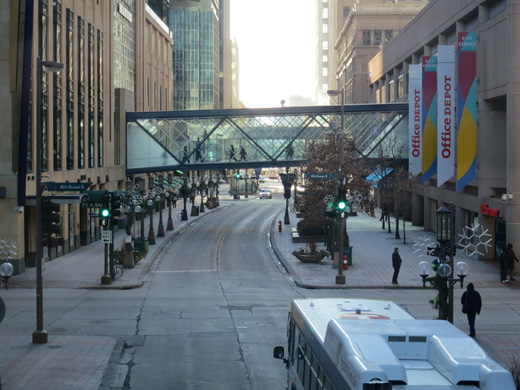 As traffic shifted to the city’s second story, so did many of its businesses. This is especially true of retail businesses catering to the office professionals occupying these buildings’ upper levels, who have no trouble finding a variety of lunch options without ever setting foot outside. Department stores like Macy’s are able to offer street- and skyway-level entrances, but many smaller businesses must choose whether to cast their lot with the skyways or risk the seasonal traffic at street level. 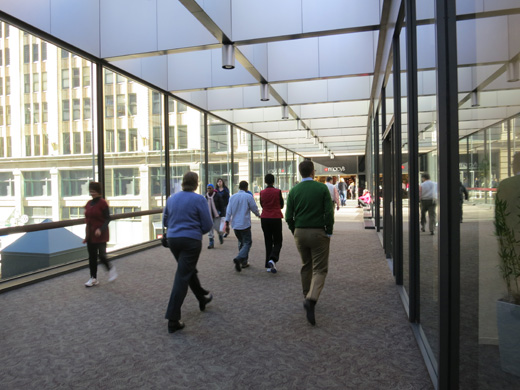 In a few cases, skyways can be found above the second-story level, as in this double-decker skyway at Nicollet Mall and South Sixth Street. When I was a child coming in from the suburbs, this struck me as the height of urban sophistication. But flourishes like this can make the network difficult to navigate as some buildings close before others. 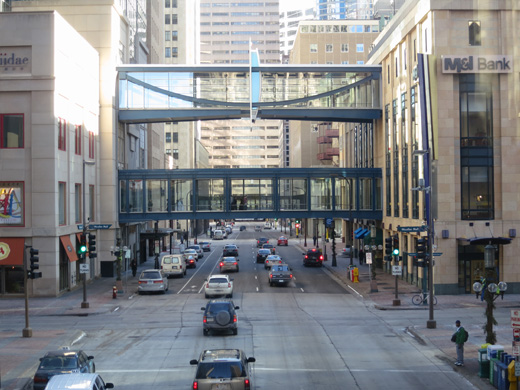 Because the skyways are privately owned, they are policed by private security guards rather than city police. There is remarkably little crime in the skyways, although buskers and panhandlers can be found from time to time. Despite being an essential part of the Minneapolis landscape, it is not clear to what degree they are part of the public sphere. 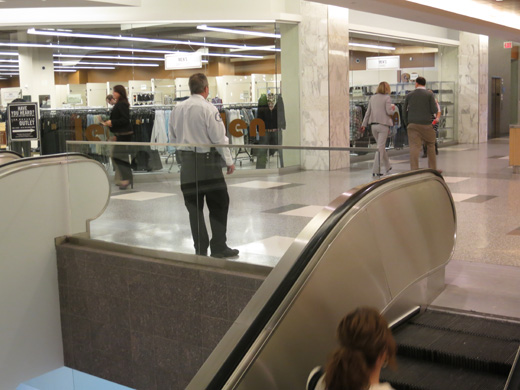 Ted Trautman is a freelance writer in San Francisco. His work has appeared in the New York Times, the Guardian and elsewhere.