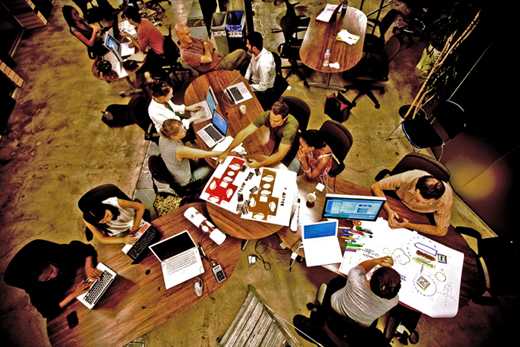 %M's Hub Bay Area. Instead of individual offices, new workspaces focus on cultivating collaboration in dense, flexible spaces. Photo by Eugene Chan.
Over the last decade, the office has been on a diet, motivated primarily by mobility. The typical measure — square feet per person (commonly known as utilization) — has dropped from 350 to 500 square feet per person in the 1990s to 150 to 250 or less today. Driven by both cost considerations and a desire for increased collaboration among staff, companies have exchanged 10-by-12-foot private offices for 6-by-8-foot or smaller workstations. Shared space has replaced individual space. Technology has enabled workers to work anywhere, anytime and growing ranks of companies, as well as the federal government, are implementing formal mobility programs — equipping their staffers with a laptop, smartphone and network connection, and in exchange asking them to “hotel” at shared, reservable desks when they’re in the office. Technology is rapidly reducing the friction of working from afar. It can be a win-win: Employees get more choice and flexibility; companies save on expensive real estate.
At the same time, a growing number of Bay Area companies, large and small, are taking a new approach to the question of investment and return in the workplace. Traditionally, we think of the workplace as the office: an interior space filled with desks and conference rooms. But these companies are focusing on the context — the spaces outside and in between the buildings — as an integral part of their workplaces. The workplace is both tied to place and freed from it; it is wherever and whatever the workforce experiences.
While efficiency affects every company, this new sort of workplace arises from a drive toward a kind of productivity that prioritizes the generative potential of culture. These newer workplaces are about creating and maintaining a sense of community, demonstrating an investment in the individual and providing more opportunities for engagement in the company.
Of course, this model isn’t for all companies, nor can all afford it right now. While most of the country is struggling to add jobs and many mature companies (including those in technology) are consolidating and disposing of real estate, high-growth startups and the Bay Area’s tech giants are unique in that they’re experiencing rapid growth.
The reasons for a company to invest in an experience-focused workplace are self-reinforcing: Doing so will attract talent, breed loyalty, encourage employees to spend more time at the office and therefore increase productivity. Building community at the office creates more opportunities for crosscollaboration, discovery and innovation. Emphasizing internal culture also supports a company’s broader brand, internally and externally (a satisfied staff is among the biggest PR forces a company has).
The link between productivity and experience expands the single-use office into an urban-style mixed-use place. While it is “urban” in affect, it does not necessarily require an urban setting. In fact, these workplaces are often established away from the traditional downtown job centers, either in other parts of the city or in suburban areas.

In San Francisco, the urban example of this trend is showing up in South of Market and Mission Bay, not the Financial District. These workplaces value large, open, horizontal spaces and physical or historic character in the building (just ask any real-estate broker about the popularity of SoMa’s brick and timber). Equally valuable are the synergies of its neighbors (whether an alley of exotic food trucks or the local art gallery). While many companies are attempting to create this experience ad hoc out of the city, a few are building it anew. 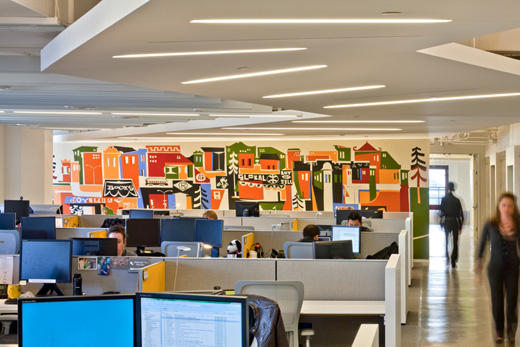 Genslerdesigned offices for United Business Media (UBM), Photos by Nic Lehoux
Salesforce.com’s choice to build a new 2-millionsquare-foot campus on 14 acres in Mission Bay was a big win for San Francisco in retaining large technology companies. Salesforce.com currently occupies a number of buildings centered around One Market Street, and in considering the move to Mission Bay there was concern about the firm being isolated on a campus of its own. To prevent this, the company designed an urban environment that breaks down the conventional walls of the corporate campus. The proposed plan has no single gated campus entry. 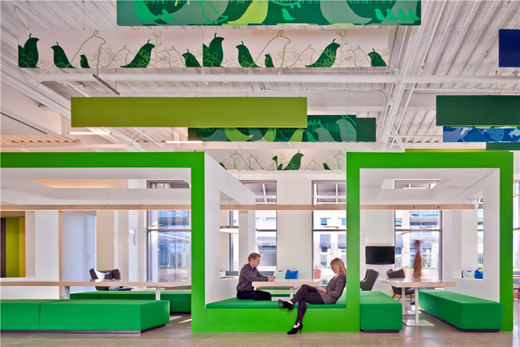 Nokia, Photo by Nic Lehoux
Instead, public streets and public programs weave through the ground floor. Each building has its own private entrance, so that all of the surrounding space remains public. Seven of the eight proposed buildings contain publicly accessible retail, proposed as a mix of sit-down restaurants, casual cafes, shops and services totaling 65,000 square feet. With a planned workforce of 8,000 here, salesforce.com is forgoing a cafeteria and opting instead to rely on clusters of food-related retail for its employees. The retail is oriented in and around the Town Square, a public space that fronts Third Street and connects through to the waterfront, similar to Levi’s Plaza in scale. Salesforce.com may be giving up a level of privacy and control in creating this as an integrated campus, but the return is the potential for a vibrant, mixed-use environment that doubles as both an extension of its campus and a part of the city. 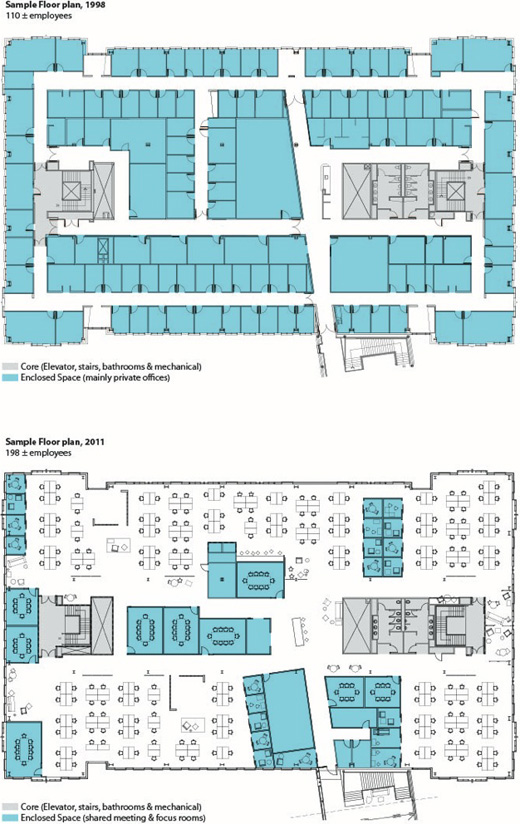 Demonstrating the shift toward more collaborative work, as Facebook moves into the former Sun Microsystems headquarters, the company will house nearly double the number of employees in the same amount of space. Individual space has been minimized while shared space and resources expand.

The developer Forest City is also betting on the integrated, mixed-use urban campus, albeit with a slightly different approach. At Fifth and Mission streets, on a site anchored by the San Francisco Chronicle Building, Forest City and Hearst are planning a 4-acre mixed-use development known as the 5M Project. Conceived as a “co-created community,” it hinges on shared resources and experiences. With a focus on the power of interaction and connections, the project is attempting to reconsider ideas around traditional retail and the community created by collaborative companies. Roughly 170,000 square feet — most of the ground floor of the site, as well as the Chronicle Building — will be dedicated to a new version of retail: social, active tenants and organizations, whether arts, startups, nonprofits, community organizations, local vendors, workshops or membership-driven businesses. Three years of research and observation (as well as the need to wait out the downturn) enabled Forest City to begin an iterative model of development. Hub Bay Area, a co-working space, and Intersection for the Arts gallery, currently located in the Chronicle Building, were among the first to settle in, creating a loop between local arts and social entrepreneurship. On the second floor, Twitter co-founder Jack Dorsey chose to locate his rapidly growing startup, Square, a new tool for mobile payments that’s already in use at the Off the Grid food trucks parked in the alley outside. This mix of startups and established organizations quickly filled up the existing rentable space, and there is now a waiting list for tenants.
Like salesforce.com, the 5M Project envisions an alternative to the downtown, single-use office model and expands the idea to be truly mixed-use by including residential units. 5M’s proposal for the future development of the site, just beginning to work its way through the review and entitlement process, posits that those companies drawn to the project — as well as residents and retail tenants — will see the value in engaging in the broader community and be willing to break down their own walls to create a collective neighborhood asset that advances growth and innovation.

Outside the city, the experience-driven campus takes a slightly different form. Without the density or context of a city like San Francisco or San Jose, the suburban model relies more on creating a mixed-use experience internally.
In Menlo Park, Facebook is in the midst of reconceiving the traditional suburban corporate campus while working within the bounds of the previously built Sun Microsystems headquarters. In choosing this site, Facebook plans one day to fit 6,600 employees in a space that originally housed 3,400. That density is intentional, designed to bring people together and create buzz and interaction. With some additional transit programs, the company intends to double the density of the campus without increasing vehicle trips or demand for parking — a reasonable goal as nearly 50 percent of its employees already use the company’s shuttle service. 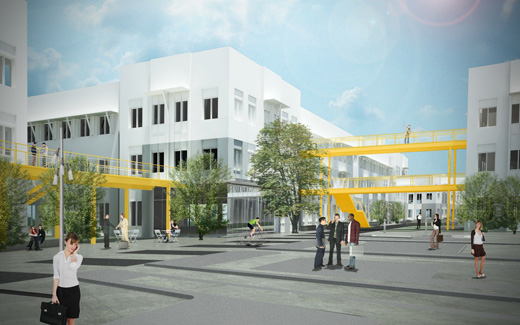 Companies like salesforce.com and Facebook (shown here) are attempting to build a “Main Street” of their own within the corporate campus.

Inside the campus, densification is occurring through the removal of private offices and the design of smaller and more open team workspaces. Each individual workspace is roughly 30 square feet with the majority of employees working at simple desks grouped together. Minimizing individual space allows for an expansion of shared spaces and resources — the utilization averages roughly 150 square feet per person. Within the workspace there are a variety of break-out areas, meeting rooms, white boards and surfaces ready for employees to make their mark. The entire project focuses on reinforcing Facebook’s culture, in order to retain it as the company grows. Every decision reflects this — for example, furniture was rejected if it was too heavy for an employee to move around.
Despite the campus’s suburban location, the urban experience is evident in the plans as a whole. Pathways inside and outside the building are dubbed “streets” and “alleys.” The existing layout is fairly compact, with buildings circling a central courtyard that is the heart of the workplace, crossed by new bridges that will connect the upper floors of a few buildings. As the campus is not immediately proximate to local retail or services, Facebook has created its own ground-floor retail around the courtyard. Though the campus will offer such basic services as bike repair and doctors’ offices, the main focus is on food. Facebook does plan to have a traditional cafeteria but has undersized it slightly, providing additional capacity through multiple small food venues — from burritos to barbecue. Drawing on a strong belief in food’s return on investment, Facebook will attempt to transplant the Bay Area’s foodie culture to its site.

The array of amenities and services on the campuses, both urban and suburban, described here is not particularly new. More than 20 years ago, Sun Microsystems had a cafeteria, gym, doctors’ offices and more. In today’s emerging models, however, these amenities aim to simulate the urban experience in a way that is more closely integrated with the campus or office than ever before. The campuses in the city are drawing local retail into their own buildings, shifting the dividing line between public and private. The new suburban paradigm expands to claim exterior space, activated by retail and services, as part of a more broadly defined workplace that is its own minicity. Both models most clearly resemble a university campus, in which living and working are intertwined within a connected community.
This demand for livable places that are also more “workable” echoes the ideals of today’s urban planners and policymakers, who aim to create more walkable, social, dense and transit-oriented environments. What does it mean, though, when this is being created within the private sector? And by single companies? We cannot ignore the demand for privacy, particularly among Silicon Valley companies, or the value of an internal community. Yet perhaps the examples at the Hub and 5M signal a shift among the next generation of companies, in which the value of community and the potential for innovation made possible through interaction outweigh the need for total privacy. If so, business parks and job centers could be reimagined in kind: Companies too small to create a full-service campus could instead leverage shared resources — whether urban or suburban — to create the experience of community and culture across corporate boundaries and property limits.