What's Next for Big Planning?

San Francisco adopted two major plans this year. Will we see more of these in the future?

Two major projects—Treasure Island and Parkmerced—were adopted by the Board of Supervisors in 2011. Collectively these projects will lead to the creation of more than 13,000 new units of housing.

While the passage of Treasure Island and Parkmerced represent a great accomplishment for the city, there are fewer and fewer opportunities for “megaprojects” like this left in the city. At the same time, there are not many new neighborhood plans in the works that propose major land-use changes. All of this raises questions about what the future of forward-looking planning will be in San Francisco. 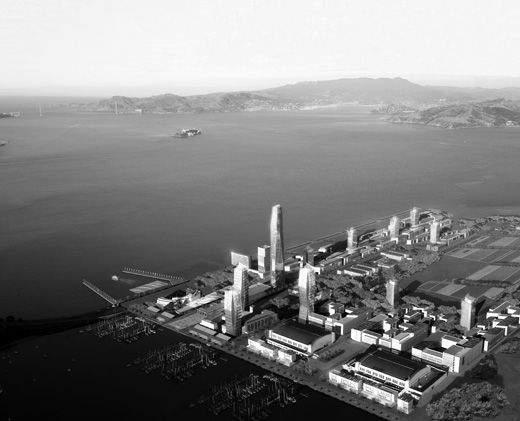 In the past ten years, San Francisco has completed a remarkable amount of planning work. The Eastern Neighborhoods Plans rezoned four neighborhoods, including East SoMA, the Mission, Potrero/Showplace Square and the Central Waterfront. The Better Neighborhoods Plans including the Market/Octavia Plan and the Balboa Park Plan also secured passage. Add to this megaprojects like Hunters Point Shipyard, Treasure Island and Parkmerced, and the city has added capacity for more than 30,000 [1] additional units of housing. This is, collectively, a major accomplishment. But at the same time, regional agencies have projected that San Francisco will need to add between 76,000 and 110,000 units over thirty years, so our work is not yet done. [2]

Land-use plans come in essentially two forms: neighborhood plans, which encompass many parcels, buildings and owners; and megaprojects encompassing large, single-ownership parcels. Because they are owned by a single entity, megaprojects have the potential to support substantial changes to both buildings and infrastructure. Megaprojects provide greater opportunities to change things like circulation, stormwater management and energy supply, and can sometimes generate higher levels of affordable housing because of the economies of scale in construction. However there are often greater placemaking challenges to overcome to ensure that development feels varied and organic as opposed to homogeneous and sterile.

Neighborhood plans by contrast cover a wide variety of parcels and are implemented over time through the actions of individual property owners, creating a varied and interesting environment. But big changes in public realm improvements and infrastructure are more difficult to achieve this way.

The road to adoption for both neighborhood plans and megaprojects is long and winding. The Market and Octavia Better Neighborhood Plan took more than a decade to complete. Mission Bay took more than three decades. There are many reasons for this, but it comes down to the fact that people in San Francisco don’t agree about what kinds of development should take place, or even whether there should be development. State laws like the California Environmental Quality Act create lots of opportunities for these disagreements to play out in protracted public processes. And San Franciscans with many different agendas try to get new development to pay for as many public needs as they can, resulting in lengthy negotiations.

The likely elimination of redevelopment in California, a key initiative of Governor Jerry Brown, will bring further changes to the field of large-scale planning. Redevelopment has been the major way that neglected areas slated for new development are able to pay for infrastructure, as well as a major source of funding for affordable housing in the state.

For some cities, such as San Jose, which had the largest redevelopment agency in the state, redevelopment is truly over, and this will mean a sea change in how planning works. For communities like San Francisco, redevelopment may be able to continue more or less as it has in the past, but with reduced resources to fund affordable housing and other public benefits.

In the midst of all these changes, San Francisco appears to have become reticent to take on new large-scale planning work. Some of the major plans currently in the works were initiated many years ago and are now nearing completion, such as the Transbay Transit Center and Western SoMA. Others, such as Glen Park and Japantown, are called land-use plans but propose almost no land-use changes that increase zoning capacity. Still others are “strategies,” not land-use plans, i.e. the Central Market Economic Strategy, which primarily does not propose changes in what can be built. Only the newly initiated Central Corridor plan for SOMA between 2nd and 6th streets contemplates substantial new land-use changes.

But what does this all mean if you care, as SPUR does, about building a substantial number of housing units and adding new jobs near transit? Should we assume that over the next 30 years we have a few more megaprojects and only very targeted neighborhood plans to complete before San Francisco is “done”? Do we continue to do neighborhood plans, in spite of how long they take and how expensive they are? Do we continue to argue for the importance of city building, even when it is long and often painful to do?

The answer, we believe, is all of the above. It is critical to the city and the region that San Francisco continue to find new places to add housing and jobs. Stonestown Shopping Center, Pier 70, the air-rights over the 4th and King Caltrain Station and Schlage Lock are all potential new megaprojects. Surely there are others as well. There are smallscale changes to the Planning Code that will help without significantly changing the scale of allowable development. And of course there are many neighborhoods that would benefit from the kind of careful, intensive planning work we saw in the Better Neighborhoods process.

City building is not easy to do. But even in this difficult climate, San Francisco needs to be up to the task.