The Rise of Tactical Urbanism

How a temporary project turned a series of vacant lots into a destination for food, art and culture.

Proxy, the temporary two-block project designed by Envelope Architecture+Design, transformed a series of vacant lots in Hayes Valley into a destination for food, art and culture. It also made the case for successful short-term use of undeveloped land in San Francisco. Mixed-use, high-density development, including affordable housing, is eventually planned for the site, but in the meantime, Proxy will act as a placeholder through 2016.
WHAT IT MEANS
Proxy represents a unique coming together of entities typically at odds with each other — planning and building departments, communities, architects. As a model for interim use of vacant land, Proxy is developing policy and protocol to help assuage the diverse concerns of the government, city residents, landowners and developers.

The Proxy site before as parking lot
In 2005, Envelope Architecture+Design won first prize in the Octavia Boulevard Housing Competition, designing housing for one of six city-owned parcels freed up by the removal of the Central Freeway. Then the economy tanked and with it drowned any hope of getting the innovative housing proposals built.
But a few years later, Envelope got a nice consolation prize when the firm responded to a request for proposals from the San Francisco Mayor’s Office for temporary uses on the very same vacant lots. What they proposed was a temporary project built from durable, portable shipping containers that would help create a vibrant place for both commerce and culture in the heart of Hayes Valley. Since the city is still committed to building affordable housing on the site some day, the project was of necessity conceived as something temporary in nature, hence the name "proxy."
Both the city and local residents were keen to avoid a proliferation of parking lots, and their preference for a vibrant and vital alternative helped Proxy come into being. Equally important was the collaboration among the architects, the Mayor’s Office of Economic and Workforce Development, the Planning Department, the Hayes Valley Neighborhood Association and the local community.
The little village of local restaurants, cafés and retail that make up Proxy (current tenants include Ritual Coffee Roasters, Smitten Ice Cream and the Suppenkuche Biergarten) has temporarily transformed an underused but high-value urban area into a thriving cultural space — and will do so for five more years. The project reveals temporary interventions as an apt response to a civilization in flux, and could easily be applied to other sites in San Francisco or in other cities. 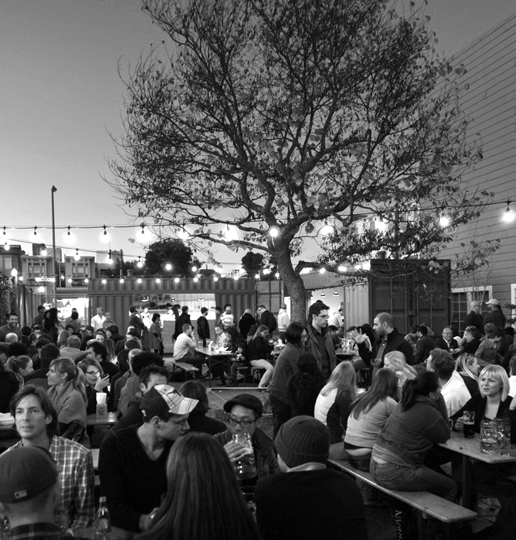 Parking lot converted into a biergarten
It is important to note, however, the considerable challenges in creating such projects. Envelope has had to obtain more than 25 permits to date, and the firm expects that number to exceed 50 by the end of the project. Each separate structure at Proxy required its own address. Environmental review was necessary — at a cost of $5,000 — despite the temporary nature of the project. The building department didn’t quite know what to do with Proxy as its many facets didn’t adhere to conventional building code; in response, some have suggested the introduction of a “Renewable Temporary” category, allowing more flexibility for future endeavors.
The path to Proxy was fueled by the success of temporary projects initiated by New York’s Department of Transportation Commissioner Jeanette Sadik-Khan in recent years. Her groundbreaking work has helped bring about a change in conventional wisdom in the development community, empowering the city to work with developers to allow for desirable uses on their properties on an interim basis. We're seeing the impact of this in cities throughout the country.
Historically, vacant lots, empty storefronts and dirt plots waiting for development have blighted their surroundings and have dragged down property values. Proxy has demonstrated how positive changes can be made to a neighborhood; the challenge ahead is how to mitigate the losses when a popular project is eventually removed to make way for future development. Having explored and experienced the potential of the public realm, the neighborhood will demand more of the same in the future. The hope is that the project can change both public and bureaucratic perceptions of what is possible in San Francisco. 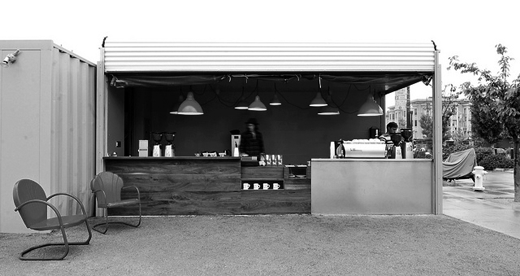 Parking lot transformed into a cafè

Allison Arieff is the editor of The Urbanist.