San Francisco’s first competitive mayoral election using ranked-choice voting is on the books, and by most objective measures the system held up rather well: The election results were clear and uncontroversial, individual ballots contained fewer errors than in past contests and most voters chose to participate fully by ranking their first-, se
cond- and third-choice candidates.
WHAT IT MEANS
Despite these results, it’s still unclear whether ranked-choice voting accurately reflects popular opinion.  While 73.2 percent of voters ranked three different candidates in the mayoral election, only 52.4 percent did so in the five-candidate race for district attorney and 42.6 percent in the four-candidate race for sheriff.  Bullet voting (voting only for one candidate) remains prevalent: In the mayoral election 16 percent of voters indicated a preference for only one candidate, as did 27 percent in the DA’s race and 38 percent in the sheriff’s race. It’s not clear if a sizable block of voters sincerely preferred only one candidate or whether they were unsure what to make of a ranked-choice ballot. Meanwhile, 1.2 percent of voters marked more than one candidate as their first choice. This figure is higher than in standard “vote for one” candidate races, and it invalidated a couple thousand votes overall.
The deeper questions about the relative effects of ranked-choice voting are difficult to answer. In addition to the voting system, the context of the election included generous public financing, an incredibly deep pool of serious contenders and a popular acting mayor who entered the race at the last minute. It’s impossible to disentangle the independent effects of ranked-choice voting. But it’s easy to see the deep flaws in this election.
The clear results from November’s election included abysmal turnout — right around 42 percent — the lowest in a contested mayoral election since at least the 1960s. Only Mayor Gavin Newsom’s 2007 landslide re-election was lower. Voters are rational. They weigh the costs and benefits of casting a ballot in determining whether or not to participate in an election. And this was a costly election: Sorting through the relative strengths and weaknesses of twelve serious candidates and ranking one’s three choices takes quite a bit of information. And it was not clear what the benefits of voting would be to an individual voter. Aside from the fact that the twelve candidates operated within the relatively narrow ideological spectrum of San Francisco politics and might have appeared similar to voters, polls indicated (correctly as it turned out) that acting Mayor Ed Lee was well ahead. This signals to voters that their vote is unlikely to matter in the outcome.
The mayoral race, generally uneventful for the better part of a year, became exceptionally nasty in the final month. While ranked-choice voting has been said to discourage negative campaigning, it only really discourages negative hits on those lower in the standings, whose ballots are likely to be redistributed. The front-runner is still fair game because her or his votes are unlikely to be transferred to another candidate — which means there is no need to worry about offending the frontrunner’s supporters. Whether by chance or design, as the relative positioning of the candidates became clear in the month or so before the election, the race turned decidedly ugly. 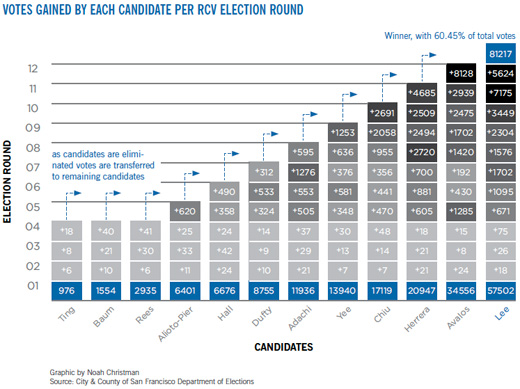 And while the election produced no surprise upsets like the one in Oakland’s 2010 mayoral contest, the seeming clarity of the margins of victory in the three contests hides another fact: In 15 of the 18 ranked-choice contests held so far in San Francisco, the winning candidate did not receive a majority of the votes cast. Mayor Ed Lee only appeared on 43.9 percent of ballots. Sheriff-elect Ross Mirkarimi appeared on 46.9 percent. Their “majorities” were secured in relation to their nearest competitors and rested upon on tens of thousands of ballots that were eliminated early in the counting rounds because they did not include second or third choices. These elections did not simulate a majority runoff.
Only District Attorney-elect George Gascon won an actual majority of votes, an outcome that largely rested on his good fortune to compete in the final round against David Onek rather than Sharmin Bock. While Bock’s votes were split in Gascon’s favor, had she received a couple thousand more votes and leapfrogged Onek, the race would have been exceptionally close, as Onek voters preferred Bock to Gascon by a wide margin.
The critical question is whether this impacts elected officials’ ability to govern effectively. The concept of a “mandate” is a highly contested one in political science. All of the winners on election night received the legal mandate to govern. And it is likely, given the margin of victory, that the vast majority of voters will see these outcomes as legitimate (unlike what appears to have happened in Oakland, where a mayor who did not win a majority now faces a lack of support). And there is no evidence that any of the city supervisors who were elected without a majority have had to convince their constituents that they legitimately won. Still, particularly for a mayor, there is an advantage to securing a majority electoral coalition when it comes time to govern. And a city facing significant economic, institutional, fiscal and social challenges needs effective leadership. The jury remains out on whether ranked-choice voting facilitates this.
Editor's note: After this article was published in The Urbanist, San Francisco State Professor Emeritus Rich DeLeon asked us if he could present another point of view. His rebuttal appears on our blog. Corey Cook  in turn responded with a follow-up post, also on our blog.

Corey Cook is an associate professor at the University of San Francisco, where he teaches American politics and conducts research on election results and political geography in California.