In the 1920s, European architects proposed a new city. The chaos of industrial civilization would be redeemed by a stupendous landscape of skyscraper towers rising out of a park-like setting. Nature would ameliorate the tall buildings, adorning their abrupt and jarring artificiality with dewy grass and leafy canopies. Alas, in American cities, crisscrossed by grids and streets and their streams of vehicles and pedestrians, this dream of architecture rising directly from nature was all but impossible.

Then, in 1959, the new Kaiser Center complex at the edge of downtown Oakland came up with a solution. Atop a five-story parking garage that abutted a 28-story office tower, landscape architects Osmundson & Staley erected a bucolic perch for skyscraper observation.

Visitors originally entered the garden from the top floor of the White House department store. Now, they walk through the parking garage and ascend an elevator to experience the startling sight of trees rooted in building; trees rising atop the concrete slab that underlies the breadth of the three-and-a-half-acre garden. Six inches of soil are all that separate the garden from a four-inch layer of aggregate rock, and then the slab. Here and there mounds extend the soil a few precious feet to allow for shrubs, and trees like olives, magnolias, and holly oaks.

On gray walkways, I lope around green lawns and a dark amoeboid pool. Raising my eyes, I see the rectilinear towers, but I read them not as volumes containing innumerable, invisible worker drones. My sight today is painterly, and so the Kaiser Tower and the later Ordway Building (1970) flatten into framed pictures in the sky that track its atmospheres and luminosities. 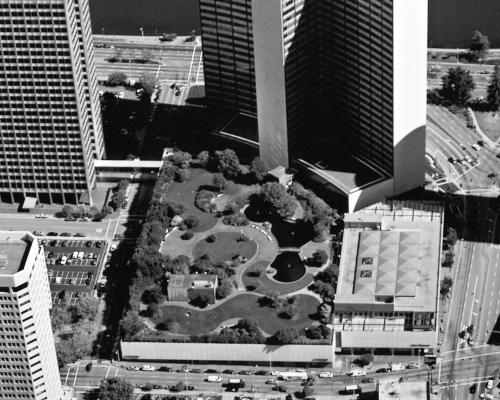 Aerial view.  The biomorphic shapes of the pool and lawns follow the precedent of Thomas Church’s groundbreaking Donnell Garden (1948) in Sonoma. Here, five stories in the air, the landscape architects massed vegetation along the perimeter in order to encourage garden-level views up toward the office towers. To the right of the garden is the roof of the former White House department store. 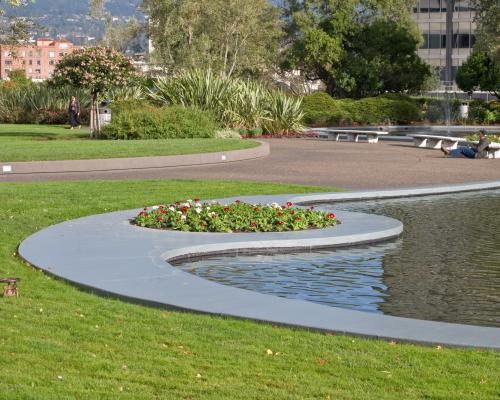 Pool.  Looking east toward the hills, the pool’s dark waters pretend great depths. Looking closely, though, one can discern the black painted bottom sixteen inches down. Three fountains function as vertical focal points, much like the garden’s mounds of flax and 42 specimen trees. 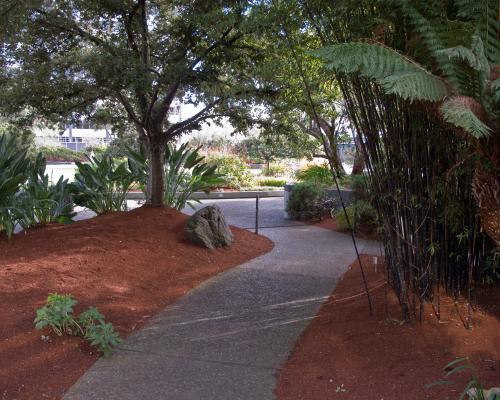 Walkway.  A path winds through the shade of bamboo and groupings of birds of paradise. 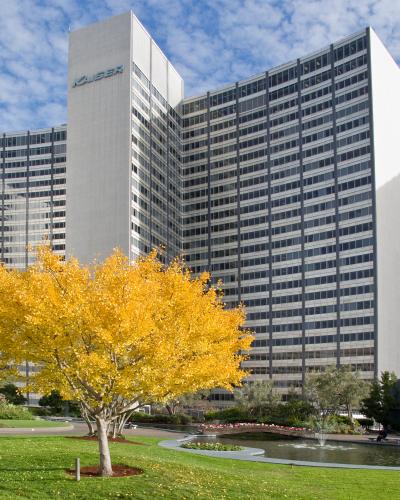 Kaiser Tower.  The principal volume of the 390-foot tower, designed by Welton Beckett, gently curves in harmony with the lake beyond. Its solid ends are clad in pre-cast panels of dolomite. The tower is enlivened here by a gingko tree in autumnal glory. 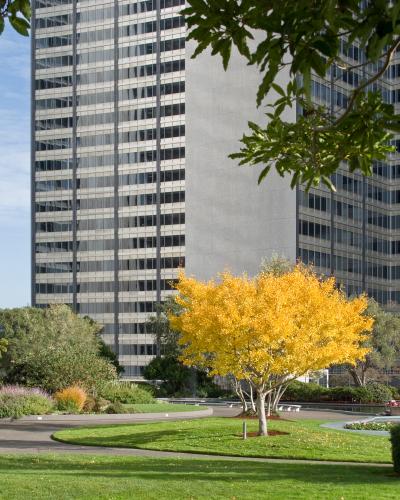 Kaiser Tower (detail).  In concert with a projecting wing, the bent curtain wall oscillates in and out of its frame — what amounts to a skyscraper self-portrait. The façade composition is enhanced by the variety of materials — black steel lines, gray glass, rectangles of anodized gold and naturally colored aluminum. 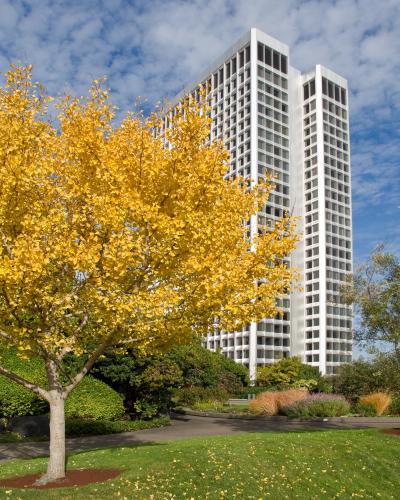 Ordway Building.  Designed by Chuck Bassett of Skidmore, Owings and Merrill, the 28-story tower is sheathed in anodized aluminum and features an H-shaped plan that doubles the number of corner offices. At 404 feet in height, it is Oakland’s tallest building. 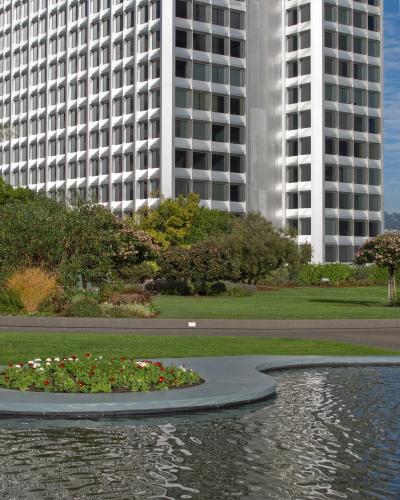 Ordway Building (detail).  Spandrel panels bend and reflect shadows. A grid of windows captures clouds gliding through the sky. And like the garden’s tree canopy, those panels and windows flutter in flashes of sunlight.

All photos by Pad McLaughlin, except where noted.

Mitchell Schwarzer is Professor of Visual Studies at California College of the Arts. He is the author of Architecture of the San Francisco Bay Area: History and Guide (2007), among other writings on the architectural and urban history of California, the United States, and beyond.