Controller Ben Rosenfield talks about economic booms, busts and their impact on the city budget

Gabriel Metcalf: What does the "Controller" actually do?

Ben Rosenfield: The Controller serves as the chief accounting officer for the City and County of San Francisco and plays an independent role through the budget process. From an independent seat, we advise the mayor, Board of Supervisors and the general public on what's going on with the City's finances, and come up with recommendations for managing the City's financial and operational needs. It's a 10-year appointment, which is designed to provide whoever is sitting in this seat the opportunity to take a long view of the City's finances. When the Charter was written at the beginning of the 1900s, this was actually a lifetime appointment. And the idea was that you have someone in office that's focused not on the coming two or four years, but on the City's long-term fiscal health.

GM: Looking at the City budget, it feels like almost every year we have a deficit. Is that really true? And if so, how can that be?

BR: That's a great question. Obviously right now the City's dealing with a huge budget deficit for the coming several years. This is driven largely by revenue problems. We've had property taxes and sales taxes fall away in a way we've not seen in any recent year. And at the moment we have a budget deficit of almost half a billion dollars for next year that's mostly on the revenue side of the ledger. During the past decade, the City's economy was humming, and we were seeing record tax returns—a nine percent annual growth in property tax on average and really strong growth in business tax and transfer taxes. But even in those years we were seeing cost pressures on the City budget that we just didn't have revenues to cover. So it's true of years when we were in an economic downturn. It's also true of years when we were doing fine. And that's cause for concern. 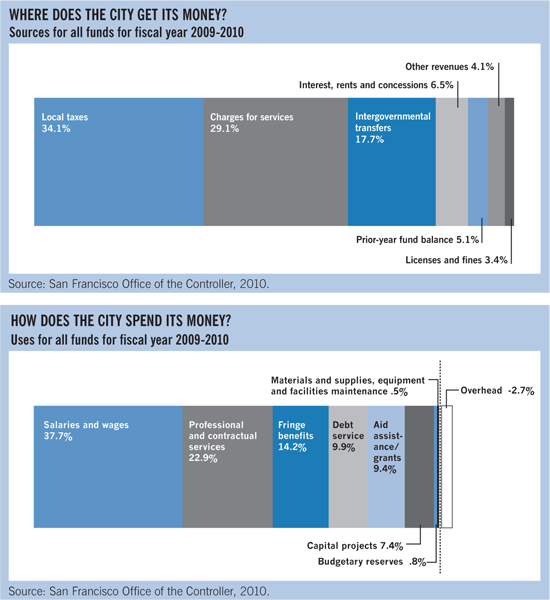 San Francisco's $6.6 billion budget is unusually large for a city of its size. This is because we are a combined city and county, and our expenses include such enterprise departments as the Port, the airport, and the Public Utilities Commission — operations that serve more than just the citizens of San Francisco.

BR: Looking back over that period of time, you've got years where the projected deficits are a relatively smaller percentage of the General Fund, and then years, like the current one, where they're huge percentages. Every deficit is not the same. But the fact that even during good times the City isn't able to structure its budget in a way that allows it to have surplus years is a problem. When you look back on the past decade, part of what's driven that perpetual budget deficit cycle has been outside of our control. We've had downturns and recessions: the dot-com bust in the early 2000s and the current recession at the moment. Like every other city and county in California, we've been hammered: Over 15 percent of our General Fund budget comes from the state, which has been in awful financial shape for a decade now, so even when times are better in San Francisco, the state's financial instability has been part of what has pushed us into deficits. At the local level, during the last decade we've locked up greater percentages of our General Fund budget to implement voter initiatives. They're all for good purposes, but it clearly takes discretion out of the budget when you allocate and fix additional monies through the initiative process to schools or for firefighters and fire stations. Looking at the last decade as a whole, the growth of the portion of the General Fund budget that we've set aside for specific uses is pretty remarkable. Revenues available for the General Fund, for remaining services that aren't specifically earmarked, are increasingly stretched. And that's part of what's driven the rest of the General Fund budget into deficit almost perpetually. Another thing to point to is the fact that employee benefit costs have been rising steeply in recent years. Looking ahead, we expect that pension contribution requirements for City employees are going to rise dramatically given the way the pension fund works. The City greatly benefited from a period of extraordinary investment growth in the 1990s where our contributions to our employees' pensions dropped to zero for a bit of time. Now it's rapidly stepping up given losses in the pension fund in recent years, again creating a cost pressure.

GM: Do you see the situation improving in the short term?

BR: We're expecting over the next three years to see a gradual economic recovery in San Francisco. The good news is we think we're close to bottom, or at bottom. The bad news is that it's going to take a lot longer to get back to peak than any of our recent recessions or downturns. But even with that modest economic recovery, we're still expecting employee benefit costs to rise at a faster clip than overall tax revenue growth. So just that one component of our spending is going to consume the majority of revenue growth, or all of it, over the next couple of years, unless we see a rebound that's much more robust than what we're expecting.

GM: We know that capitalism has an innate boom and a bust cycle. Looking back over the last couple of cycles, what do you think we have learned about public finance here in San Francisco?

BR: We've just come off a decade where we started with the dot-com bubble bust, heading into a downturn. We're ending the decade with a recession that hopefully we're now at the bottom and just starting to come out of. But we had a period of real growth in the middle. There's a moment at the bottom of these economic downturns, with all of the pressures they create on the City's budget, to think about what we could have done differently. How do we want to approach the next cycle? This is that moment in time where we get to ask ourselves, "What could we have done differently to avoid some of these challenges?" And Proposition A [the ballot reform measure from November 2009] will force us to answer these questions. It requires that we put adopted financial policies in place, which is a practice you see in most other jurisdictions. It will require the City over the coming three cycles to shift to a two-year budget process. The City will have to adopt five-year financial plans on a periodic basis. It requires our employee bargaining agreements to be adopted at the time of the budget design to better align our services. All of these tools are designed to force the City to take longer-term issues into account when it's solving shorter-term budget decisions. The mayor and the Board of Supervisors has just adopted our proposed reserve policies for the City. They become somewhat binding; they can only be temporarily suspended by a two-thirds vote. It will bring more discipline to the savings process and will smooth how the City spends its money. We'll save more during boom periods and have more available to spend during busts. One of the most remarkable things about the last decade is that we really did spend the majority of our money as we had it. We were spending more when demand on county services was less and were cutting services when we had less available and demand on those services was more. As unemployment rises, as caseloads rise in our local welfare programs, as demands on public health rise—these are the exact moments when we have less money available because we didn't save when times were better and demand on those services was lower. I think the reserve policy is going to help solve that. Historically, there is a downturn in the economy in San Francisco every five to eight years. You can look back 30 years: we go up, we go down. Those downturns tend to last two to three years. Not planning for them is a problem we can fix.

The Rainy Day Reserve relies on levels of revenue growth that the City is not projected to experience for some time. The Budget Stabilization Reserve, on the other hand, is funded through volatile revenues, and grows even in periods of moderate overall revenue growth, ensuring adequate funds are available to alleviate some portion of multi-year budget shortfalls.

GM: Well, congratulations on getting this first set of financial policies passed. You've already gotten the biggest one done apparently.

BR: Well, part of what Prop. A allows is an iterative process where we get to experiment, see what works, and then change it if it doesn't. And so I don't know that we're finished with our reserve policy here in San Francisco, but we've taken a step. So, this will be a work in progress. How we implement the other tools in Prop. A is going to be fun to focus on over the next couple of years, for our office and others. The tools are important, but how you use them is of even more importance. For instance, how does the City's two-year budget get planned and developed and adopted? What exactly does this five-year financial planning concept look like? And how can we use it to make our budget process more policy-driven with less focus on individual line items?

GM: It puts you in a role of being proactive about improving the City's financial systems—not just working within what you inherited.

BR: Because the deficit challenge at hand is so immediate and so grave, decision-makers don't have many opportunities to consider what the City is trying to get done in a given department in the next two, three, four and five years. And how can we begin planning for those changes today? It's rare. That kind of bigger-picture conversation and decision-making is going to be interesting. It's the goal.

Gabriel Metcalf is the executive director of SPUR