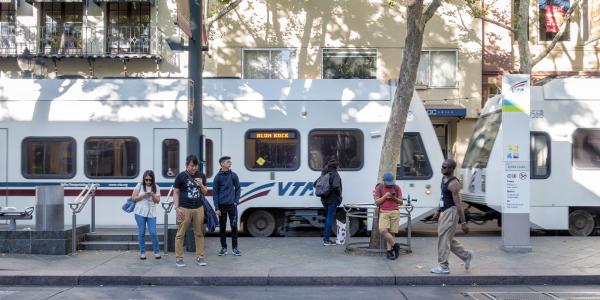 This year SPUR pitched in on an annual tradition in San José: surveying residents about their perceptions of the city on a number of metrics. In partnership with San José State University and with funding from the Knight Foundation, we put forth a series of questions to city residents and SJSU students, faculty and staff. With unprecedented changes affecting the city over the past few years, including those forced upon us by the pandemic, the survey presented a great opportunity to gauge how people were feeling about the present and future of their city and university. What we found was troubling. The survey results showed that San José residents are less satisfied with their city compared to residents of other cities across the country. Results like this are a reminder of why SPUR exists, and why our work to advance solutions for a better San José — including affordable housing, high-quality transit and improved access to economic opportunities for all residents — are so important.

The results of the San José residents’ survey  revealed they feel uneasy about their city. Only 54% think San Jose is a good or excellent place to live, and 30% believe the city is headed in a positive direction. Perhaps more troubling was that only 45% feel San José is a good or excellent place to raise children. When asked whether they would recommend living in San José, 53% of respondents answered in the affirmative. According to the survey report, all of these findings are lower or much lower when compared to other cities across the country. Whether these feelings are based on reality or perception, we should interpret the sentiments themselves as genuine.

The survey also revealed a distrust of government, even at the local level. Past San José resident surveys have shown confidence in city government fluctuating between 23% and 30% over the last several years. Satisfaction with the quality of services provided by the city has vacillated between 38% and 45%. Most residents — 64% to 76% — do not feel the city government is honest with them. The 2022 report points out that these percentages are much lower when compared to other cities around the country. These views, justified or not, mean that transparency and openness in government are as important as ever.

At first glance, one might think that San José residents are worried about what the post-pandemic world holds for them, but this does not appear to be the key driver of their responses. The results of the 2022 survey are consistent with surveys conducted by the city from 2016 to 2020. The findings from those surveys indicate that residents have had a generally negative view of their city for several years now. Residents who feel the “overall quality of life” in San José is “good or excellent” has hovered between 42% and 44% since 2016, clearly showing that negative feelings about San José predate the pandemic.

As in past years, San José State University continued to play a role in measuring city residents’ satisfaction with living, working and recreating in San José by deploying the survey to its campus community of 40,000 students, faculty and staff. The university community’s views were assessed compared to those of the citywide residents, which identified some aspects of the feedback focused on the downtown core.

In the 2022 SJSU survey, 57% of the university community expressed a positive impression of SanJosé as a place to work and 56% had a positive impression of the city as a place to study. However, SJSU respondents shared citywide residents’ concern about the lack of a sense of community in San José, with about 70% of the respondents rating it fair or poor. Most university respondents would not recommend living in San José to someone who asks.

While the university community expressed a slightly higher satisfaction rate than the citywide respondents with the overall quality of the San José transportation system, ease of public parking was highlighted in the 2022 survey as the biggest transportation concern, with over 80% rating it fair or poor — a slight improvement from the 90% dissatisfaction rate in 2019. Additionally, the university community shared citywide residents’ low confidence in the completion of the BART extension and the high-speed rail to downtown in the next 10 years.

We had a significantly lower response rate to the SJSU version of the survey this year compared to the previous two years. Over 600 university members with an age distribution between 18 and 74 responded. Among the respondents, 5% identify as Black, 26% Asian and 55% White. Over three-quarters of the university respondents live in San José, close to half live in single-family homes and 54% have been in the city for more than 11 years.

The primary question both survey results (and those since 2016) raise is: Why? Why do residents of San José feel so badly about their city? When comparing the results to where San José actually sits relative to other cities in terms of education, unemployment, crime, poverty and other quality of life metrics, it shouldn't do as poorly as it did. It’s clear that more in-depth investigation is needed as to why San José residents are so down on their city. Similarly, the university findings beg the need for deeper research, perhaps using focus groups, to understand the root cause for the challenging feedback and address it effectively.

Read the the 2022 SJSU community survey