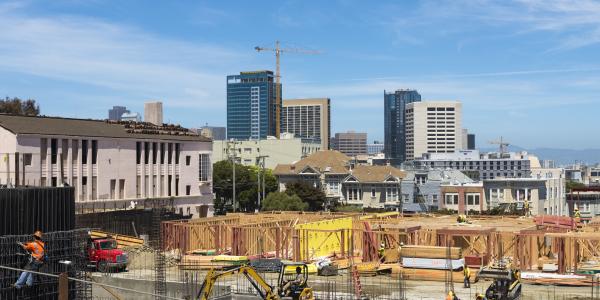 One of the critical steps in addressing California’s housing shortage is making sure that cities build enough housing to meet the needs of everyone in the community. That’s why the state requires each California city to update its housing element — the part of a city’s general plan that identifies its housing needs and goals — every eight years. The latest housing element cycle is currently underway, and SPUR has been tracking the process in the three cities where we work: San Francisco, San José and Oakland. In each city, the housing element goes through numerous iterations and significant public outreach before the final draft can be submitted to the California Department of Housing and Community Development (HCD). SPUR offers three ideas for how the cities can leverage their new housing elements to meet their housing and equity goals.

How much housing does the Bay Area need to build?

Under current state law, each California city receives a target number for the amount of new housing it is required to build over an eight-year period, known as the Regional Housing Needs Allocation, or RHNA, process. The state develops the number of housing units allocated to each region in consultation with the regional planning body (in the Bay Area’s case, this is the Association of Bay Area Governments, or ABAG), and must represent the needs of people at all income levels.

Under the state’s allocation process, the Bay Area receives a target amount of housing to build for each income level over the next eight years.

Allocations are based on a variety of factors, including population growth projections, housing cost and the number of units that were not built during prior RHNA cycles. After ABAG adopts a final RHNA, each local jurisdiction must update its housing element. These updates must describe how the city will accommodate the required growth and change its zoning accordingly.

In the current RHNA cycle, HCD has determined that the Bay Area must plan for 441,176 new housing units — 135% more than the previous cycle (2015–2023). ABAG then distributed this need to the region’s 101 local governments across nine counties, with its three biggest cities — San Francisco, San José and Oakland — receiving a combined one-third of the region’s housing allocation.

What has changed in the new cycle?

Since the last cycle, California has implemented several laws to advance its fair housing goals. In 2018, the legislature passed several bills, including AB 1771 (Bloom) and SB 828 (Wiener), which require regions to “affirmatively further fair housing” by focusing on overcoming patterns of segregation and fostering inclusive communities. Recent changes in state law have also made it more difficult for wealthier jurisdictions to shirk their responsibility to provide new housing, particularly since jurisdictions are no longer allowed to take low population growth into account.

Like many California cities, San Francisco, San José and Oakland have released initial drafts of their housing elements for public review, outlining key goals and strategies to achieve their housing goals over the next eight years. While there are many aspects of these drafts that SPUR supports, including the focus on racial equity and inclusion, we have three overarching suggestions for San Francisco, San José and Oakland to guide investments and policies that can help create an equitable, sustainable and prosperous region.

SPUR commends all three cities for their unprecedented and extensive engagement with local communities and advocacy organizations in this housing element update. The state has set a high bar for the amount of housing each city is to produce, and it’s clear that the cities aim to meet these targets while effectively furthering racial equity and housing affordability goals. With their new housing elements, San Francisco, San José and Oakland have outlined strategies to achieve these goals by building housing in high-opportunity neighborhoods — places where wealthier people live that have job centers, good schools and access to amenities. Creating housing opportunities in higher wealth neighborhoods provides more households with access to resources and diversifies communities that have been historically exclusive.

However, to actually achieve their fair housing goals, the cities must be realistic and specific about their plans to build in well-resourced areas. We urge San Francisco, San José and Oakland to seriously consider the likelihood of substantial housing development in high-opportunity areas given limitations such as the high cost of land, community opposition and spatial and environmental constraints. In San Francisco, the economic viability of building in well-resourced areas may make the city’s proposal to develop 22,555 housing units in its central and west side neighborhoods infeasible. Even prior to the pandemic, housing construction in the central and west side neighborhoods was challenging because the rental rates were too low for developers to recoup the high cost of building there. The feasibility equation has likely worsened with the drop in rents and skyrocketing construction costs. In addition to zoning changes that would allow greater housing density in high-opportunity neighborhoods, San Francisco will need to explore other incentives, such as a temporary reduction of the on-site inclusionary housing requirement, reducing city fees and exempting projects from discretionary review. In San José, concerted community opposition and high land costs limit housing construction in North and West San José, its highest resource areas, so the city must maximize affordable housing production on existing publicly owned land and provide incentives for development. In Oakland, many of the city’s highest opportunity neighborhoods are in the hills and have environmental constraints such as very high fire risk, which means the high-opportunity land not constrained by hazards must be zoned to allow greater housing density.

Effective housing policy is not concerned solely with providing enough housing but also with ensuring that it meets diverse needs by considering where and for whom housing is built. The housing element update is one tool cities can use to address ongoing segregation both within cities and within regions. While SPUR has focused on the housing elements in the Bay Area’s central cities, many communities throughout the Bay Area have a long history of using land use to perpetuate racial segregation. We are grateful for the work of many aligned organizations in the region tracking the housing elements in exclusive communities and fighting for the inclusion of more multifamily and affordable housing.

In September, Governor Gavin Newsom signed AB 2011, which will allow affordable and mixed-income housing development on underused commercial sites, including corridors on the west side of San Francisco and in the suburban areas of San José and Oakland. However, cities must go further in ensuring that they encourage infill and eliminate other barriers to housing development, such as high city impact fees, discretionary review and onerous environmental analyses.

Given that so much of the cities’ current residential capacity is located in low-resource and high-segregation areas, cities must also consider planning a sizable portion of affordable housing in these areas. However, it is important to ensure that appropriate community infrastructure is also planned in these neighborhoods. Building affordable housing in low-income neighborhoods is an important anti-displacement strategy, as it can help stabilize communities, but it must be paired with investments in parks, community spaces and programs that benefit low-income families.

The availability of financing, the price of land and construction costs all contribute to the cost of housing investment and can potentially hinder the production of affordable housing. Although some of these constraints are market-driven and generally outside of direct government control, cities have options for addressing these constraints in their housing elements. San Francisco, in particular, has a wide variety of constraints related to lengthy permit processing times, discretionary permitting requirements and sky-high fees and exactions on new development. San Francisco’s permitting processes are so problematic that the State of California is conducting its first-ever investigation into a city’s housing policies. While San José has adopted solutions to housing constraints, such as reforming citywide parking minimum requirements, the city’s housing element can more adequately address production constraints by reviewing the numerous limitations on multifamily zoning in the Urban Village plans.

There is still much work to be done to ensure that the Bay Area’s biggest cities use the sixth housing element cycle to produce enough housing at all income levels — and do so in a way that combats the region’s continued racial segregation. We are committed to working in partnership with San Francisco, San José and Oakland to develop housing elements that comply with state law and contain strong implementation strategies to remove barriers to housing development, stabilize low-income communities and meaningfully address social and racial equity. We will continue to work to fight for policies in these cities that will help create a more sustainable, equitable and prosperous region.

Thank you to Sarah Karlinsky, Erika Pinto and Sujata Srivastava for their contributions to this article.