Climate Justice: The Peril, the Progress and the Path Forward 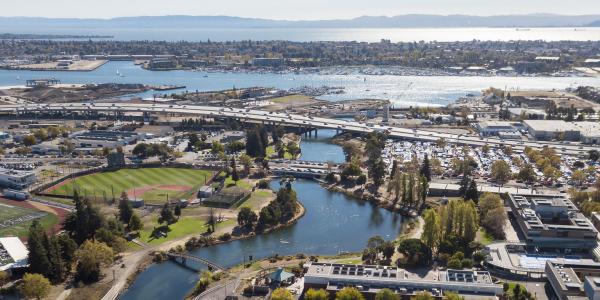 Climate discourse has often relied on moral platitudes, abstract facts and figures, and an over-emphasis on the consequences of climate change to incite action. What if instead we turned to a framework of justice and equity? What if we found motivation for climate action in our care for our communities and for ourselves? That’s how Diana Fernandez became an organizer with the climate youth activist group Zero Hour. She joined the movement after seeing how climate change would drastically impact her community, a small Florida town prone to coastal flooding and rising temperatures.

SPUR’s Ideas + Action 2021: Sustainability & Resilience symposium invited speakers like Diana to share their progress in creating a climate movement centered on community and people. In the course of three days, more than 30 international climate experts, elected officials and environmental leaders explored how to apply this framework as they discussed the perils, progress and path forward to creating a hopeful, sustainable future for the Bay Area and beyond. In reflecting on these conversations, it’s clear that the peril is our inability to understand climate as a throughline for the many problems we’re trying to solve as a society. Shifting existing paradigms is the progress we must make, and the embrace of all solutions — technical and political — is the path forward.

The Interconnectedness of Climate Change

In his opening keynote address, Dr. Robert Bullard, the former dean of the Barbara Jordan-Mickey Leland School of Public Affairs at Texas Southern University, clearly laid out how climate change is inextricably linked to our transportation, energy, food and water systems, as well as poverty, health and race. As Molly Peterson, a science and climate reporter for KQED and the moderator for the “Youth Revolt” panel, put it, “We’ve moved from a world in which we’re talking about these abstract, not very well-conceived policy ideas to ‘health care is a climate problem, a lack of infrastructure is a climate problem, the failings of our economic system is a climate problem.’” It is critical to understand how climate intersects with each of these areas in order to build holistic and just climate solutions.

As institutions and individuals begin to recognize the intersectionality of climate change, there are several other paradigms that must also shift in order to more effectively address climate change. Some are pervasive at the institutional level, such as the State of California’s approach to wildfire management. In “Woe for the WUI,” Erik de Kok, deputy director of California’s Office of Planning and Research, addressed the paradigm of “environmentalist versus industrialist” through the example of housing development. “There’s a false narrative when we’re pitting housing, climate change management and equity against each other,” he said, adding that we must look beyond this false narrative: There are solutions that support housing development and meet our climate goals, such as building compact, infill housing and changing zoning laws to restrict new development in the wildland-urban interface.

The need for paradigm shifts carries over to funding incentives and resource allocation. During “Living on the Edge: The Future of Coastal Cities,” Jainey Bavishi, director of the Mayor’s Office of Resiliency in New York City, explained how federal climate funding most often comes in the form of reactive disaster relief. As a result, communities only have the funds needed to make long-term climate investments in the wake of devastating and costly natural disasters, such as Hurricane Sandy. In his keynote remarks, Dr. Bullard highlighted how the existing design of federal disaster funding further marginalizes communities of color. In the wake of a natural disaster and the inflow of federal disaster relief, communities of color lose up to $29,000 in personal wealth, while white communities gain $126,000 on average. In this case, shifting paradigms and incentives would not only better prepare us for climate change but also advance equity.

During his closing keynote, Bill McKibben, the writer and founder of the global grassroots climate organization 350.org,  responded to the question of whether the greatest climate solutions are technology-based or human-based with another question: “What solutions can you scale fast enough to make a difference?” This sentiment was shared by Giana Amador, co-founder of the climate organization Carbon180. In “The Promise and Pitfalls of Capturing Carbon,” Giana explained how Carbon180 has built a portfolio of carbon removal solutions, ranging from nature-based solutions in forestry and agriculture to technologies like direct air capture.

The need to embrace multiple solutions in order to achieve our climate goals was also a focal point in the panel “The Next Act for Cap and Trade.” Fran Pavely, environmental policy director at the University of Southern California’s Schwarzenegger Institute, explained that cap and trade was originally intended as one solution, rather than the solution, for emissions reductions.

The panel “Roadways to a Sustainable Future” also addressed the need for multiple solutions, as well as the need to engage multiple stakeholders to address climate change. Ellie Casson, head of city and governmental affairs at Waymo, highlighted the potential for public-private partnerships in order to build integrated, low-carbon transportation systems. And fellow panelist Naomi Doerner, principal and director of diversity, equity and inclusion at Nelson\Nygaard, highlighted the importance of direct community engagement to make sure that climate solutions meet community needs and ensure that no one is left behind as we adopt new technologies and services.

In his remarks, Bill McKibben called for a “new ethic of solidarity.” As a collective, we must advocate for more just and holistic climate solutions. In the end, building a more sustainable future requires all of us to join together in commitment to ourselves and to our communities.

Watch recordings of these events