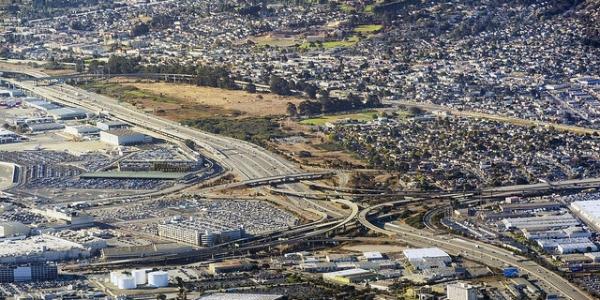 Every four years the Bay Area updates a regional plan that identifies where to add new jobs and housing and which transportation investments to make as our population grows. The latest update to Plan Bay Area is now underway — and its findings have revealed some troubling flaws in the planning tools we have for managing our region’s biggest challenges: making housing affordable and maintaining our transportation infrastructure. Now that these issues have been made apparent, it’s time to ask what we should be doing differently. SPUR identified some of these issues in an October letter.

Plan Bay Area’s goal, mandated by Senate Bill 375 in 2008, is to project the region’s future growth needs and transportation investments in a way that reduces our per capita greenhouse gas emissions from driving — even as we add two million more people to the region. Key steps in the process include adopting a regional forecast of jobs and housing out to 2040, setting performance targets, analyzing a variety of transportation investments and selecting among different scenarios for where to allocate transportation projects, jobs and housing in order to best meet the targets.

This November, the boards of the Metropolitan Transportation Commission (MTC) and the Association of Bay Area Governments (ABAG) jointly adopted a preferred scenario as part of the first update of the plan since 2013. The good news is that the new scenario projects much more housing development than the 2013 version of Plan Bay Area (820,000 total new housing units between 2010 and 2040, compared with only 660,000 units adopted in the 2013 plan). The bad news is that these increased housing numbers still result in a future Bay Area that is even more unaffordable than today. For example, low-income residents are projected to spend 67 percent of their income on housing and transportation costs, up from 54 percent in the last plan. The scenario also foretells a decrease in access to jobs: Only 55 percent of jobs are expected to be near transit (i.e., within Priority Development Areas) compared with two-thirds in the 2013 plan. Additionally, the scenario projects only a tiny shift (an additional 3 percent of all trips) away from driving toward transit and other modes of travel, well short of the goal of a 10 percent increase in non-driving modes. And all of this happens in an environment where we fall short on funding our full transportation infrastructure needs (a problem made $7 billion worse since voters rejected sales tax increases in San Francisco and Contra Costa County).

In other words, the newly adopted scenario should be a wake-up call. Our region-wide lack of housing and infrastructure funding is a growing crisis — one that puts the most burden on the region’s lowest income residents. In order for Plan Bay Area to work, all of our cities need to build more housing — but many have refused to fulfill their obligation. The carrot of offering additional transportation funds to cities that add housing has simply not been enough to overcome local opposition to development. Plan Bay Area is failing on its own terms, which suggests we need to look for new tools and approaches to help us actually meet our goals and targets.

We commend MTC and ABAG for offering an honest portrayal of where the region is headed. Indeed, staff members themselves admitted their disappointment that the plan moves in the wrong direction on several indicators.

While there’s a lot to be frustrated about, there is some room for hope. In particular, there are a few immediate opportunities in regional government that we can take advantage of. The impending merger of ABAG and MTC staff (in 2017) will lead to a unified planning department that can more work more closely with local governments and focus more seriously on issues like housing affordability. For the first time, the Bay Area’s three central cities — San Jose, San Francisco and Oakland — are working together on Plan Bay Area. The plan projects that they will take on a larger share of growth (46 percent of the region’s total housing), a good step toward putting housing near the region’s greatest concentration of transit. Additionally, the gap between the plan’s housing goals and our business-as-usual growth patterns has inspired staff and board members to expand the region’s focus on housing policy more than ever before. Finally, when they adopted the preferred scenario, the boards of MTC and ABAG also agreed to develop an Action Plan that will accompany the final version of the plan when it is adopted next summer.

Moving forward, what more should we do?

Find ways to pay for things without the federal government. We’re already moving in this direction (currently, only 11 percent of the projected revenue in Plan Bay Area comes from the federal government), but we may need to come up with much more local and regional funding in the coming years. For example, we will have to identify creative funding sources to pay for our infrastructure needs, including road pricing, higher gas taxes and/or vehicle miles traveled fees. SPUR began investigating this line of thinking several years ago when we sketched out how to build California high-speed rail without more federal funding.

Create more tools to encourage development in the right places. In recent years, MTC has taken important steps toward conditioning some regional funds. For example, the One Bay Area Grant program requires jurisdictions to have an adopted housing element and a complete streets policy in order to access certain regional grants. We should look into additional tools, such as allowing development to proceed “by right” if it conforms with a city’s housing element and its overall housing targets.

Develop a detailed implementation plan that would identify the specific actions necessary to achieve the plan’s targets and goals. We thank the Nonprofit Housing Association of Northern California and others for leading the charge in encouraging MTC and ABAG to develop an implementation/action plan. This action plan should answer questions such as:

Explore the possibilities for true statewide growth management legislation. Models include Washington and Oregon, where local plans must be consistent with the regional plan and/or state standards. Statewide growth management legislation may be necessary to adequately respond to California’s newly adopted greenhouse gas targets (Senate Bill 32), the ongoing housing shortages in coastal cites, the economic struggles of the Central Valley and the need for the state’s investment in high-speed rail to be implemented without an ongoing operating subsidy.

Many of the ideas above are within our power. In a time of potential federal retrenchment, it is of even greater importance for the Bay Area and other metropolitan areas to come up with their own solutions to longstanding problems. The adopted scenario of Plan Bay Area has highlighted the depth of our problems. Now is the time to fix them.