What Is Oakland Doing About Its Housing Crisis? 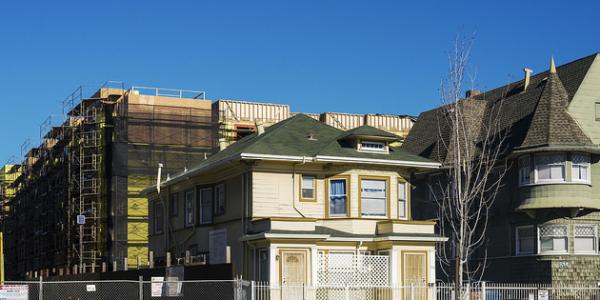 As housing prices continue to climb in Oakland and stories of displacement circulate, many are asking when the city is going to do something about the housing affordability crisis. Progress may look slow on the ground, but in fact the city has been making rapid progress on a number of fronts.

In March, the Mayor’s Office released Oakland at Home, an action plan for addressing the city’s severe housing crisis. The plan (available as a pdf download) seeks to preserve the affordability of 17,000 homes and create 17,000 new ones by taking steps to protect renters, removing housing from the speculative market to make it permanently affordable, streamline permitting and create new resources for affordable housing.

It’s never easy to stay focused in a time of crisis. Yet the city and its partners in the advocacy community have done a commendable job keeping everyone’s focus on real solutions to the housing challenges the city faces. In a few short months, many of the recommendations made in the report are well underway, and some are already complete.

On this front, the city is moving full speed ahead. Alameda County is in the process of developing an affordable housing bond for potentially more than $500 million, and will be voting in mid-June to put this bond before voters in the November 2016 election. Also in November, the City of Oakland will be putting an infrastructure bond before voters, with $100 million slated to go towards acquiring properties, rehabbing them and making them permanently affordable for the people who live there. This spring the city also adopted a historic impact fee on new market rate housing, a sizable portion of which will be dedicated to the creation of affordable housing. Given how Oakland’s affordable housing funding was decimated by the elimination of redevelopment agencies in California, this is a remarkable series of positive steps forward in just three months since the report was released.

At the same time, the city continues to refine its framework for thinking about public lands. The City Council is considering changes to the way Oakland sells public lands, including adding provisions that 15 percent of units developed on city land slated for housing be affordable and that 30 percent of sale proceeds be directed to the city’s Housing Trust Fund that has been consistently diminished over a decade.

Removing Housing From the Speculative Market

One of the key ideas from Oakland at Home was to strongly support actions to take existing market-rate buildings that house low-income families and make them permanently affordable. The key way to accomplish this is for affordable housing nonprofits to buy the buildings and place restrictions on how high rents can be. Often such buildings are not in good shape and need a lot of rehabilitation work. The city has been working closely with a collaborative of nonprofits to identify buildings that could be bought and resources to make those purchases. The infrastructure bond mentioned above could provide the funding needed to acquire and rehab units.

Perhaps the area of greatest focus for advocates has been looking at ways to make rent control work better in Oakland. A lot of advocacy has been directed at the City Council on this issue. Oakland at Home made a series of recommendations to improve services to renters, strengthen renter protections and beef up enforcement. The City Council and the Mayor’s Office will need to face the challenge of determining exactly what is not working with the current system and taking steps to address those challenges, be they backlogs at the Rent Adjustment Program Office, lack of access to information about what rights renters and landlords currently have under the existing system, or addressing difficulties tenants have in making ends meet. More work is needed to make sure these important issues are addressed.

In addition to all the work mentioned above, two other key efforts are also moving forward. The first is legislation sponsored by Council President Lynette Gibson-McElhaney to create a preference for Oakland residents and workers who apply for affordable rental housing funded by the city or who seek to participate in the city’s first-time homebuyer program. Such a preference program would help Oaklanders benefit from all the work the city is currently doing to create more affordable housing.

The other effort is aimed at making the most of Oakland’s great transit infrastructure to build housing that is more affordable by design. This approach makes market-rate housing less expensive to rent or buy because the units are smaller and/or come without a parking space. The city is in the process of upgrading its off-street parking requirements, proposing to replace requirements that buildings have a minimum number of parking spaces with instead a maximum number in places with the greatest transit access, and allowing for lower minimums under other circumstances. These are important first steps to encouraging the market to produce less expensive housing.

This is a crisis twenty years in the making. We’re impressed by the dedication and speed the Mayor and City Council are showing to address the affordability crisis, with so many pieces of the puzzle moving forward in such a short period of time. We hope that Oakland will continue to stay focused on the steps needed to address the crisis, using the action plan as a framework to keep the city’s collective goal in focus.