Oakland’s Plan for Facing the Housing Crisis Head On 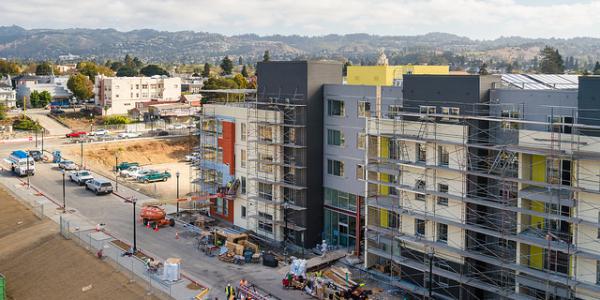 To address the current crisis, Oakland will need more new housing like MacArthur Station, a project of BRIDGE Housing. Photo by Sergio Ruiz for SPUR.

Oakland is experiencing a housing crisis that threatens to irrevocably change the city. The numbers are stark. According to analysis by Strategic Economics, asking rents increased more than 68 percent between 2007 and 2015. Oakland is the fourth most expensive housing market in the country, trailing only Boston, New York and San Francisco. Meanwhile, incomes in Oakland have not risen fast enough to cover the cost of these rising rents.

How Did We Get Here?

Part of the answer can be found in the imbalance between job growth and housing supply. The region has produced an extraordinary number of jobs and not enough housing units. Between 2010 and 2014, the Bay Area has added roughly 446,000 private-sector jobs but only 54,000 housing units. Housing production in Oakland has not kept pace with demand. Between 2000 and 2014, Oakland produced 543 units on average per year, of which 40 percent on average was affordable housing.

Couple this all with Oakland’s numerous assets — a beautiful, diverse city with great urban bones and strong access to regional transit, located a stone’s throw away from the most expensive housing market in the county — and you have the recipe for a perfect storm.

What to Do Next?

City leaders in Oakland are deeply focused on finding ways to address the housing crisis. Last year, Mayor Schaaf assembled a broad group of housing experts, advocates and practitioners to form a Housing Implementation Cabinet. Tasked with making recommendations to preserve housing for existing residents while also planning for new growth, the cabinet released its action plan, Oakland at Home (pdf download) last week. The report builds on work outlined in A Roadmap Toward Equity, authored by PolicyLink and adopted by the Oakland City Council in September 2015.

Oakland at Home is an action plan geared towards preserving 17,000 existing homes and creating 17,000 new ones. The strategies in the plan fall into four categories:

Currently Oakland has several laws that protect renters, a “just cause” eviction law and a rent control ordinance. The just cause eviction law states that a renter can’t be evicted except for a reason specified in the ordinance, such as failing to pay rent or using the home for illegal purposes. The rent control ordinance regulates rent increases for most apartment units built before 1983. These rental protections typically do not apply to buildings of three units or fewer with an owner occupant or to apartments built after 1983.

Moreover, there are many units in Oakland in need of repairs in order to be habitable. If the landlord doesn’t make repairs in a timely fashion, a tenant might need to work with the city to have a code compliance officer inspect the unit. If the unit isn’t repaired, the city can issue fines.

Oakland at Home makes several recommendations to further protect renters. Among them:

2. Take existing housing out of the speculative market.

Many apartment buildings in Oakland that house low-income households are not permanently affordable housing, meaning they are vulnerable to rental increases. Sometimes such buildings are referred to as naturally occurring affordable housing or NOAHs. As the cost of housing increases, such buildings become more attractive for investors to buy. Right now, there are still many buildings in Oakland that could be purchased by nonprofit housing developers and made permanently affordable.

While the cost for affordable housing groups to buy such buildings may not require investment from the city, rehabilitating the units would require a new source of funding. Oakland at Home recommends creating a new funding stream for rehabilitation. This could come from a new city infrastructure bond and from programs that would allow transfer tax rebates for affordable housing providers that acquire such units.

In addition, the city is already pursing the creation of an impact fee on new residential construction. It is anticipated that this fee would generate roughly $60 million over eight years for affordable housing.

Building new market-rate housing is critical to addressing the imbalance between supply and demand. While Oakland cannot on its own build enough housing to address the Bay Area’s housing crisis, creating new housing in Oakland will certainly help.

Historically Oakland has not produced very much market-rate housing. A number of factors are at play, including skittishness on the part of investors and the fact that building in Oakland costs just as much as in other parts of the Bay Area, but the rents an owner can charge are lower. However, it appears that this trend may be shifting. As Oakland’s market grows stronger, encouraging new construction, particularly of units that are affordable by design, can help combat spikes in housing costs.

Oakland at Home makes several recommendations to support the creation of units that are efficient to construct, including encouraging modular and prefab housing, supporting parking reforms, such as replacing parking minimums with parking maximums in areas with good transit, and regulating buildings by form (height, bulk and set-back) rather than through regulations that cap the number of units that can be built based on the size of the site.

Oakland at Home lays out a comprehensive and ambitious vision for addressing the housing crisis. SPUR is proud to have participated in crafting this document and we look forward to working with city leaders to bring this vision to reality over the next several years. We hope the city will move toward implementation as quickly as possible. The time to address this crisis is now.