Go Big and Go Home: Why the Housing Bonus Program Is Good for SF 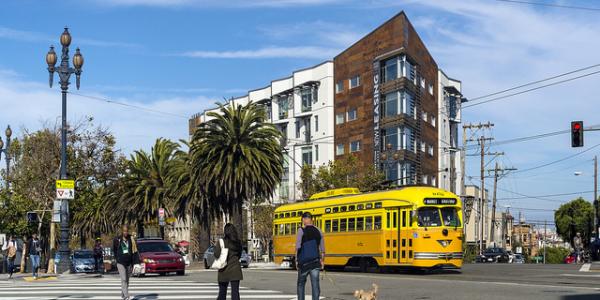 San Francisco's proposed Affordable Housing Bonus Program would enable the creation of more housing on underutilized land, like this project on a former gas station site. Photo by Sergio Ruiz.

On June 13, Mayor Ed Lee and Supervisor Katy Tang’s Affordable Housing Bonus Program heads to the San Francisco Board of Supervisors’ Land Use and Transportation Committee. The program, which left the Planning Commission at the end of February, has come under fire from both housing advocates and neighborhood opponents. Recently, Supervisors Eric Mar and Aaron Peskin announced a competing proposal called “Density Done Right.” We still think the original proposal is the way to go. Here’s why.

The Affordable Housing Bonus Program was introduced nine months ago in an effort to comply with a state law that requires all California cities to have a bonus program in place. The basic concept of a density bonus program is to offer a set of incentives (such as additional units, additional building height or flexibility on zoning requirements) to encourage developers to provide more affordable housing than is otherwise required.

SPUR has supported the bonus program for many reasons: It will increase the overall supply of housing (both affordable and market-rate), it will encourage higher densities at appropriate locations near transit, it will create a much-needed middle-income housing program, and it will improve the feasibility of certain vacant and underutilized sites. All without public subsidy. As a bonus, it gives extra perks (such as an extra floor in height and expedited approvals) to 100 percent affordable housing developments that use the program.

Unfortunately, the program has raised the hackles of two groups: those who are concerned about its effects on their residential neighborhoods and those who believe no incentives should be offered for market-rate development. Most of the concerns are substantively addressed in the Planning Commission’s suggested amendments. Nevertheless, Supervisors Mar and Peskin have proposed a competing proposal that would only offer incentives to 100 percent affordable projects.

SPUR is concerned by this new proposal, as it has extremely limited applicability. We are happy to support 100 percent affordable projects, but Tang’s proposal serves them even better. From what we understand, Mar and Peskin’s proposal offers less capacity (only two additional floors), adds permitting barriers and is very limited in scope (only vacant sites are eligible).

More broadly, SPUR believes that the 100 percent proposal on its own accomplishes little. For example, it doesn’t address the state’s required density bonus program — which was the impetus behind creating a local bonus program in the first place. It is likely to create hundreds of affordable units rather than tens of thousands of them. And it does not take advantage of the available levers to encourage the construction of more affordable housing without public subsidy.

SPUR will continue to support the mayor and Supervisor Tang’s full Affordable Housing Bonus Program. Like all housing affordability solutions, this program is not a magic bullet, but it is a smart tool that could make a difference in San Francisco. Ultimately San Francisco is accountable for meeting the state’s density bonus requirement, and pairing ambitious affordability targets with incentives to make them possible is the right way to grow the city’s supply of housing, both affordable and market-rate.